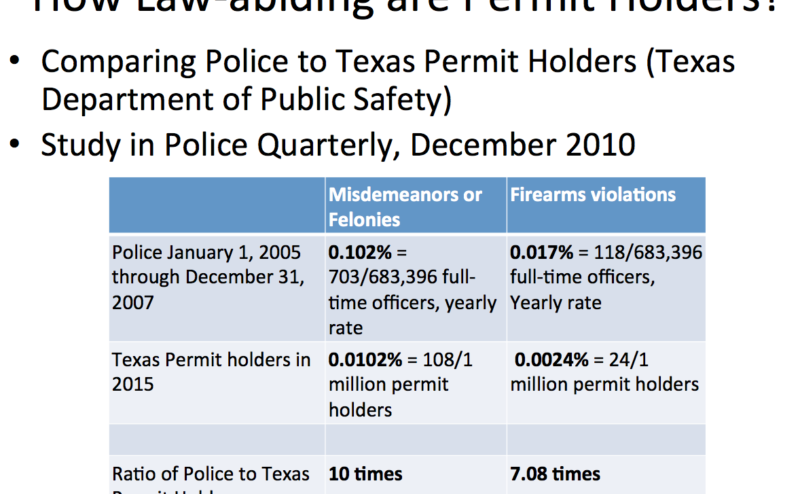 A recent study provides numbers on police convictions over a three-year period from January 1, 2005 through December 31, 2007.  This data was put together by doing news searches on media sources throughout the US.  There are two reasons that their method makes police look relatively more law-abiding than they actually are.

— Not all cases where police officers have been convicted of crimes will obtain news coverage, and the authors of this study undoubtedly missed even some of the cases that were reported.

While their numbers may somewhat underestimate the number of crimes for which police are convicted, their raw data serves as a useful starting point for analyzing the behavior of permit holders and for comparing police to citizens in general (surprisingly, this study in Police Quarterly just reports total crimes by police and makes no such comparisons).

First, let’s convert their number into a crime rate by police.  Note that there were 683,396 full-time law enforcement employees in 2006.  With about 703 police crimes per year, there was a rate of 102 per hundred thousand full-time law enforcement employees (see page 421 in “Exit Strategy: An Exploration of Late-Stage Police Crime” by Stinson, Liederbach, and Freiburger).

For a comparison with concealed handgun permit holders, the rate of police facing weapons violations is of particular interest.  0.017% = 118/683,396

But that isn’t a fair comparison for Florida permit holders because the violation rate for officers is an annual rate and the rate for permit holders is over the entire period.  In a 2011 Fox News piece, John Lott provided this calculation:

Over the last 36 months, only four permit holders have had their permit revoked for a firearms related violation — an annual revocation rate of 0.0003%. . . .

So putting the police numbers at an annual rate gives you a rate of 0.01%.  Both 0.01% or 0.0003% are both extremely low and the violations might not be comparable in that the private individuals might run into problems that a police officer (even one off duty might not run into), but the rate for police is still 23 times higher.

For all misdemeanors and felonies by police, the rate is 703 yearly average/683,396 full-time officers = 0.102%.  By contrast, for Texas in 2015, it was 108/1 million permit holders = 0.0102%.  For Florida, between October 1, 1987 and March 31, 2017,  10,868 concealed handgun permits were permanently revoked for misdemeanors, felonies, certain physical infirmities, incapacitation, or involuntarily committed for mental illness. This is an annual rate of 10.3 per 100,000 people who had a permit during that period – still a mere tenth of the rate at which officers commit misdemeanors and felonies.

Data for 22 other states is available in the third edition of “More Guns, Less Crime,” and it shows that the general revocation rates for permit holders are similar to the rate for Florida.

Other comparisons can also be made for police

Also of interest was this statement in the paper. As expected, the rate of crime for younger officers is a lot higher than for older ones.

The dissertation is available here.

Other data shows much higher rates of criminal violations by police.  The Honolulu Star-Advertiser claims that from 2010 to 2016 almost 16% of police officers have been arrested or prosecuted.

UPDATE: Another study funded by the National Institute of Justice has information on the number of officers arrested for crimes during the period from 2005 through 2011, though the numbers are very questionable and not of much use.  To look the data that overlaps part of the previous study shows 891 arrests in 2006 and 964 in 2007, an average of 927.5 per year.  At that rate, that implies about 75.8% of police who are arrested get convicted.  The true conviction rate is undoubtedly less than that as this study also relied on media reports and it seems that if the media tends to cover more serious cases, it might be less likely to cover an arrest of a police officer than a conviction.

As a warning, the previous paragraph should only be taken as suggestive.  The numbers between these two studies are somewhat hard to reconcile.  Take DUI offenses for police officers.  The NIJ study implies that about 14.3% of arrests involved DUIs.  Assuming that percentage held for the two years 2006 and 2007, that would imply 265 arrests for DUIs.  By contrast, the Police Quarterly study identified 261 convictions over the three years from 2005 to 2007.  Obviously, there can’t be more convictions than arrests, so there should be some caution here in comparing the results of these two studies.  Data for California for 2006 shows that for the general population about 90% of DUI arrests result in a conviction.