The United States is unique in terms of mail-in voting. Seventy-four percent of European countries entirely ban absentee voting for citizens who reside domestically. Another 21% require government issued photo IDs for absentee voting, and some of those countries limit it to those who are hospitalized or in the military (with third-party verification). These countries also don’t send absentee ballots in the mail, but instead require that they be collected.

Not only doesn’t California require the ID requirements seen in the rest of the world, but they have other problematic practices such as vote harvesting. The initial news stories out of California are troubling, especially when you take the warning from the Carter-Baker commission on how difficult it is to catch vote fraud with absentee ballots, let alone the mail-in voting that we are seeing here.

Two news stories fit together. Even though these stories took place in Los Angeles, the Los Angeles Times mentioned neither of them.

1) A felon in Torrance, California was found to have several hundred recall ballots in his car.

KTLA reporter said election officials told Republicans: “This has been happening all morning.” The video is more complete than this quote from the KTLA news article.

West Hills resident Estelle Bender, 88, said she was far from the only person who was being told incorrectly that they had already voted.

In addition to friends of hers who experienced the issue and two other women outside the polling place, Bender said that inside, “the man next to me was arguing the same thing.”

Bender said she filled out a provisional ballot and “left really angry.”

Bender added that, to her knowledge, many of those affected by this issue are self-identified Republicans, and she’s suspicious.

“I’d still like to know how I voted,” Bender said.

Giving people a provisional ballot only solves part of the problem. Those Republicans who didn’t vote will presumably be recorded as voting against the recall and against Larry Elder.

Finally, combine this with what happened in Detroit.

The trainer in the video is heard discussing what election workers should do if a voter shows up to vote in person on Election Day if the clerk has already received the voter’s absentee ballot. The trainer tells election workers, “Do not issue him a ballot.” The trainer explains that voters are allowed to vote only once and that if a voter already cast an absentee ballot, they cannot vote again in person on Election Day.

If the voter insists that they did not already vote, the trainer explains that the chairperson can issue the voter a provisional ballot that will not go through the tabulator to be counted and will be destroyed if the voter already voted absentee. . . .

So if they determine that you had already voted, they threw out the provisional ballot. If someone already voted for you, there is essentially no way for you to correct it.

There is also a large number of ineligible people who are registered to vote in California.

In July, Fix California reported that mass irregularities in California’s registration and voting numbers continue to erode voter confidence, which is why Grenell and his team at Fix California launched a statewide legal survey analyzing the current status of voter rolls throughout the state. They said they are prepared to file lawsuits against counties.

Some California counties have an astoundingly high number of ineligible registrants: 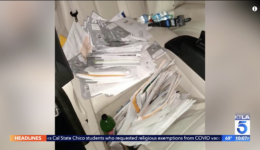