At Real Clear Investigations: America the Outlier: Voter Photo IDs Are the Rule in Europe and Elsewhere 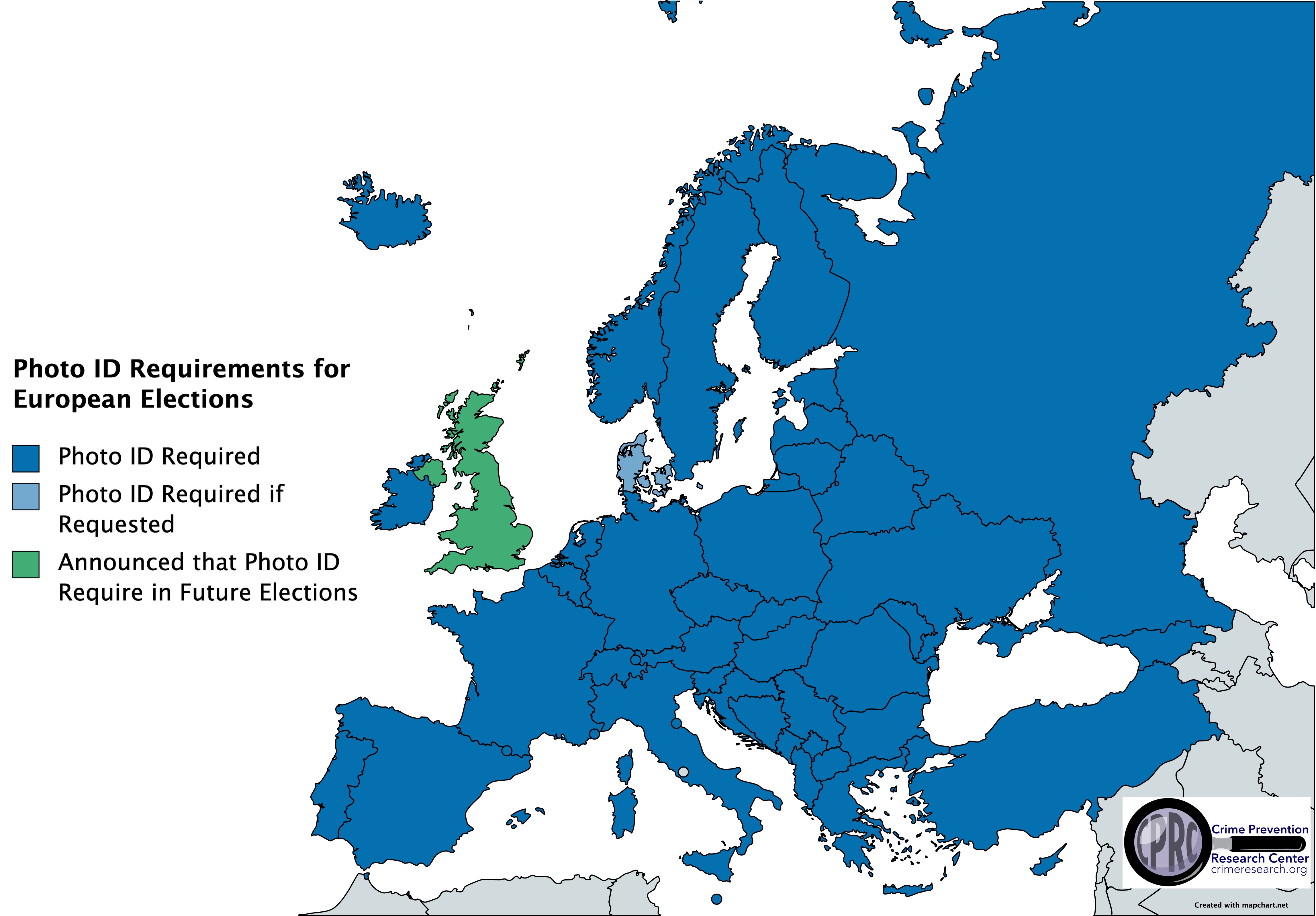 Dr. John Lott has a new piece at Real Clear Investigation/Real Clear Politics and the Daily Signal and American Greatness.

Democrats and much of the media are pushing to make permanent the extraordinary, pandemic-driven measures to relax voting rules during the 2020 elections – warning anew of racist voter “suppression” otherwise. Yet democracies in Europe and elsewhere tell a different story – of the benefits of stricter voter ID requirements after hard lessons learned.

A database on voting rules worldwide complied by the Crime Prevention Research Center, which I run, shows that election integrity measures are widely accepted globally, and have often been adopted by countries after they’ve experienced fraud under looser voting regimes.

Of 47 nations surveyed in Europe — a place where, on other matters, American progressives often look to with envy — all but one country requires a government-issued photo voter ID to vote. The exception is the U.K., and even there voter IDs are mandatory in Northern Ireland for all elections and in parts of England for local elections. Moreover, Boris Johnson’s government recently introduced legislation to have the rest of the country follow suit.

Criticisms of the British leader’s voter ID push are similar to those heard in the U.S. The Scottish National Party claims his voter ID push targets “lower income, ethnic minority and younger people” who are less likely to vote for Johnson’s conservatives and therefore represents “Trump-like voter suppression.”

Yet despite such pushback, Britain looks set to follow countries in Europe and elsewhere with stricter voting regimes, few of which temporarily relaxed any of their voting rules during the pandemic.

Seventy-four percent of European countries entirely ban absentee voting for citizens who reside domestically. Another 6% limit it to those hospitalized or in the military, and they require third-party verification and a photo voter ID. Another 15% require a photo ID for absentee voting.

Similarly, government-issued photo IDs are required to vote by 33 nations in the 37-member Organistion for Economic Co-operation and Development (which has considerable European overlap). Only the UK, Japan, New Zealand, and Australia currently do not require IDs. Of those outliers:

There were a few exceptions to developed countries’ general avoidance of emergency voting measures during the pandemic. Poland allowed mail-in ballots for everyone last year as a one-time measure, as did two cities in Russia, but Poland’s rushed plan played out so poorly it dissuaded other countries from following suit. France made more limited exceptions, temporarily allowing sick or at-risk individuals to vote absentee.

In some countries, even driver’s licenses aren’t considered authoritative enough forms of voter identity verification. The Czech Republic and Russia require passports or military-issued IDs and others use national identity cards. Others go even further: Colombia and Mexico each require a biometric ID to cast a ballot.

Many countries in Europe and beyond have learned the hard way that fraud can result from looser voting regimes — and they have instituted stricter voting measures in direct response to it.

In Northern Ireland, where a bitter sectarian conflict extends to hardball electoral machinations, voter fraud has been described as “widespread and systemic” on all sides. Both Conservative and Labour governments instituted reforms to quell it. In 1985, the U.K. started requiring identification before ballots could be issued. This proved insufficient. A 1998 Select Committee on Northern Ireland report found that medical cards used as IDs after the 1985 law could be “easily forged or applied for fraudulently,” thus allowing non-existent people to vote. By 2002, the Labour government made voter identification cards much more difficult to forge, and used the more secure ID and other rules to prevent people from registering to vote multiple times. These anti-fraud provisions led to an immediate 11% reduction in total registrations — a suggestion to Labour of the extent of earlier fraud.

One study of vote fraud in Northern Ireland before the 2002 reforms interviewed Brendan Hughes, the former IRA Belfast commander. Hughes explained that he had a fleet of taxis to ferry fraudulent voters from one polling station to another and that they “dressed up volunteers with wigs, clothes, and glasses, and said this practice continued for decades.” Young women were usually “used for voter impersonation because they were more likely to be let off if there was any doubt.”

A 2002 survey of Northern Ireland by the U.K. Electoral Commission, conducted after the rules passed but before they went into effect, found that by a 64% to 10% margin, voters thought that vote “fraud in some areas is enough to change the election results.”

Elsewhere in Britain, there have been notable fraud cases involving absentee ballots. In 2004, before recent photo ID requirements, six Labour Party councilors in Birmingham won office in what a judge later described as a “massive, systematic and organized” postal voting fraud campaign. The fraud was apparently carried out with the full knowledge and cooperation of the local Labour party, and involved “widespread theft” of absentee ballots (possibly around 40,000) in areas with large Muslim populations. The fraud reflected some Labour members’ worries that the areas’ Muslims could no longer be trusted to vote for the party because of unhappiness over the Iraq War.

On the mainland, France banned mail-in voting in 1975 because of massive fraud in the island region of Corsica, where postal ballots were stolen or bought and others were cast in the names of dead people.

In Hungary, which has the most lenient mail-in voting regulations in Europe, including no ID requirement, the government of Prime Minister Viktor Orbán, criticized for authoritarian tendencies, won 96% of the mail votes in the 2018 election, thus giving itself a supermajority in parliament by a very slim margin. Concerns are that fraud is possible because “there is little scope for verification of identities, or to check that people are still alive.”

When there are no tamper-resistant photo IDs, fraud is difficult to prove. If hundreds or thousands of people vote at a polling place, how do you verify if someone voted by pretending to be someone else? Criminal convictions tend to occur only when people try voting in the same polling station multiple times instead of visiting multiple stations. But, with poll workers often working different shifts, even the same polling station can be compromised.

Take a case from the U.K. in 2016. As the Electoral Commission describes it: “Later in the day the same voter attended again and sought to vote again, this time in his own name. Due to certain physical characteristics of the voter (he was very tall and wore distinctive clothing) and the vigilance of the presiding officer he was suspected of having already voted earlier and formally challenged.”

American progressives might take heed of a Mexican election stolen from voters on the left in part due to lax voting requirements facilitating fraud. The 1988 loss of Cuauhtémoc Cárdenas, the leading leftist presidential candidate, to Carlos Salinas de Gortari of the long-governing Institutional Revolutionary Party has long been considered a result of electoral fraud, later even acknowledged by the then-incumbent president, Miguel de la Madrid.

And as a result of that fraud, Mexico in 1991 mandated voter photo IDs with biometric information, banned absentee ballots, and required in-person voter registration. Despite making registration much more difficult and banning absentee ballots, voter participation ratesrose after Mexico implemented the new rules. In the three presidential elections following the 1991 reforms, an average of 68% of the eligible citizens voted, compared with only 59% in the three elections prior to the rule changes. Seemingly, as people gained faith in the electoral process, they became more likely to vote. Ultimately, in 2006Mexico would revert to permitting absentee voting, but limited it to those living abroad who requested a ballot at least six months in advance. Claims of voting irregularities have occasionally arisen in later years, but they focus on vote buying, not impersonating others, or having non-existent people voting.

Despite the record of Europe and the vast majority of the rest of the developed world, congressional Democrats are pushing to remove identification requirements for voting. The House recently passed the For the People Act of 2021, which replaces state voter ID rules with a signed statement from the voter, and makes permanent the pandemic’s mail-in ballot voting. The mailing out of blank absentee ballots en masse would become a fixture of American elections. The Senate Committee on Rules and Administration marked up the bill, but failed to pass it with a 9-to-9 pure party-line tie vote. However, Democrats have recently changed Senate rules, so they can still bring the bill to the Senate floor for a vote.

Meanwhile, efforts in Republican states to require voter IDs for in-person voting and absentee ballots have triggered boycotts from Major League Baseball and other corporations. Georgia’s new absentee provisions raised a ruckus despite being much less restrictive than much of the rest of the world. Anyone who wants an absentee ballot can obtain one. A reason need not be given, such as being out of town, but one must have an ID to get an absentee ballot. The pattern is similar for developed countries around the world.

The case of Mexico undermines the idea that stricter voting rules lead to vote suppression, and so does some of the evidence from America. A number of states have in recent years instituted photo and non-photo ID measures, and found no statistically significant change in voter participation rates. Other evidence suggests that black and minority voter registration rates increased faster than whites after states implemented voter ID requirements for registration.

RCI contacted both the Brennan Center for Justice and the ACLU, two organizations that have been at the forefront of the ballot access/voting integrity debate, to ask them what they made of the more restrictive voting rules implemented elsewhere. The ACLU did not respond, and a Brennan Center spokesman said: “As a rule, we don’t comment on other countries’ voting systems because that’s not our area of expertise.”

Some have specifically objected and claimed that Switzerland doesn’t require a photo ID to vote.

You can vote directly at the polling station in the commune where you live.
Take along some ID (ID card, passport) and the voting papers you received by post. Carefully follow the instructions.

“Democracy: The Swiss Political System: Where and when to vote?” A service of the Confederation, cantons and communes.

Detailed information for all the countries is available here and here.

← On the Michigan Talk Network: Comparing Voter ID rules in the US to the rest of the world On Gun Freedom Radio about Lifetime Orders of Protection →