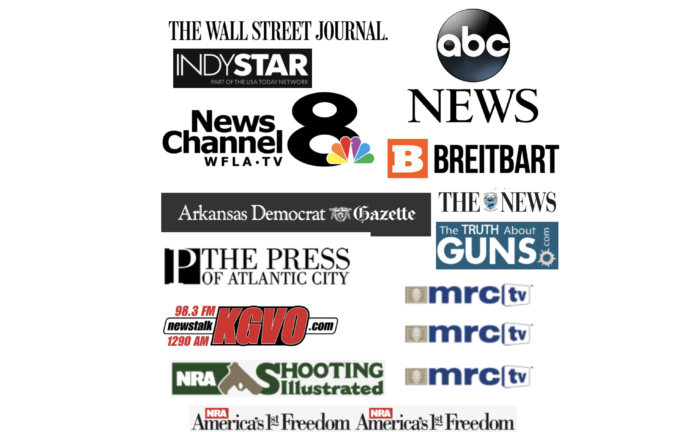 The court’s move complements the gun movement’s success on the legislative front, where advocates have worked to expand the presence of concealed weapons in public places. The number of Americans with concealed-carry permits rose to 19.48 million in 2020, up from 12.8 million in 2015, according to the Crime Prevention Research Center, a gun-rights group.

An estimated 201,000 New Yorkers had active concealed carry permits in 2019, according to an academic analysis by John R. Lott at the Crime Prevention Research Center. The state ranked as having one of the smallest numbers of permit holders as a percentage of adult population given what critics say are unduly strict requirements.

Lott estimated that over 18 million Americans have concealed handgun permits – a more than 300% increase since 2007. . . .

Within this context, a study conducted by John Lott for the Crime Prevention Research Center actually found that, when other variables are accounted for and held constant, Black police officers were just as likely as white officers to kill Black suspects and actually more likely to kill unarmed Blacks than their white counterparts. . . .

Republican Leaders partnered with Nikki Goeser, a victim of stalking, to create this legislation. She was present in the House chamber for the unanimous vote on Monday.  Goeser’s stalker shot and killed her husband, Ben, in front of her in a crowded restaurant in 2009. Her stalker has been behind bars serving time for second-degree murder, but has continued to try to contact Goeser, sending her letters from prison.

“I believe there are other ways to make those institutions safe, and we all know basically nowhere is safe, and that’s because there’s just too many guns in America,” State Senator Tina Polsky said.

The legislation only applies to concealed carry permit holders, which according to a 2016 report conducted by the Crime Prevention Research Center are the most law-abiding demographic in the country. . . .

. . . But Nikki Goeser, executive director of the Crime Prevention Research Center in Nashville, told lawmakers that there were “devastating, unintended consequences” these laws can have.

If Tennessee had a red flag law in place, the significant mental distress she experienced after her husband was murdered by a gunman could have led to her losing her firearms, which she wanted for self-defense.

“Even those with the best intentions could have an exaggerated concern and assume they were acting in my best interest, by having my guns taken from me,” Goeser said.

Dr. John Lott Jr. did an 18 year study using crime statistics from 3,000 U.S. counties. He wrote a book on his findings titled “More Guns Less Crime.” Among his findings were that concealed handgun licensing is by far the most cost effective way to reduce the crime rate.

When right-to-carry laws are enacted, the crime rate, especially the rates of violent crimes of murder, rape, robbery and aggravated assault, go down.

But right-leaning crime researcher John Lott has pointed out that [Australia’s] violent crime was already dropping before the gun ban was enacted, and that armed robbery increased right after the ban although it dropped later.

Even though the accuracy of his work has been disputed, University of Alabama crime researcher Adam Lankford was given a forum to misleadingly argue that the U.S. has one of the worst mass shooting problems of any country in the world, and blaming it on too much availability of guns.

It was not mentioned that prominent right-leaning crime expert John Lott has challenged his findings, and argues the opposite — that the U.S. has a relatively lower rate of the kinds of large-scale public shootings that so often attract media attention.

It was also not mentioned that Lankford and Lott have responded back and forth on the subject for several years as Lott argues that the U.S. has disproportionately fewer mass shootings as compared to other countries.

This one-sided anti-gun segment on CNN was sponsored in part by Progressive. Their contact information is linked.

DC Project member and Tennessee Delegate, Nikki Goeser, will testify on April 28 before the Senate Committee on the Judiciary Subcommittee on The Constitution for a hearing entitled Stop Gun Violence: Extreme Risk Order / “Red Flag” Laws.” Goeser will describe how her stalker murdered her husband in a gun-free zone. The very law intended to protect her made her defenseless as she obeyed it and left her legally permitted firearm in her car.

After Malzberg called out Biden for denying he intends to limit the Second Amendment while saying “in the next breath” that “no amendment to the Constitution is absolute,” Lott replied that, “In ten minutes or so [Biden] literally made about at least two dozen different lies on [the subject],” with some of the claims being “so outrageous.”

One example Lott cited was Biden’s claim that the “alleged” reason for the substantial increase in homicides last year was due to a “lack of gun control.”

“You don’t need to be a rocket scientist to realize that when you have inmates being released from jails and prisons, and some in a number of places more than fifty percent of the inmates being released; when you have police being ordered to stand down and not do their jobs; when you have police budgets being cut and prosecutors in major urban areas refusing to prosecute violent criminals; if you make it so that criminals aren’t being caught, and when they are caught — not being punished, and it’s not risky for them to commit crime, guess what? They’re going to commit more crime.”

Lot added the “irony” of the situation is Biden is “claiming that he cares about poor blacks and hispanics that live in these high crime urban areas,” yet “the proposals that he wants are actually going to harm them.”

“It’s going to make it so those are the very people who aren’t going to be able to afford the fees and other costs that he’s imposing on law-abiding gun owners,” Lott elaborated.

Noting the left simultaneously seeks to prevent effective policing, Lott claimed the proposals would endanger the poor even more so. . . .

After John Lott’s story on alleged election fraud in Missoula County, one of the points of contention between Representative Brad Tschida through local attorney Quentin Rhoades was the video of the actual vote counting on election night, which was live-streamed on You Tube. . . .

. . . The Crime Prevention Research Center (CPRC), a firearms and public safety research group, has also highlighted in previous reports that the number of women with concealed-carry permits increased by 207% between 2012 and 2018. . . .

Research done by criminologist John Lott found that suppressors are anything but tools used by those intent on doing harm unto to others.

As Lott wrote, legal owners of suppressors “have been extremely law abiding. In the 10 years from 2008 through 2017, the ATF only recommended an average of 44 suppressor-related prosecutions per year. This means that roughly .003 percent of ‘silencers’ are used in crimes each year.”

The number of concealed carry permits issued nationwide has reach record-setting levels, despite the rapid growth of constitutional carry states. A study issued by the Crime Prevention Research Center in September 2020 reported, “Last year, the number of permit holders continued to grow by about 820,000.”