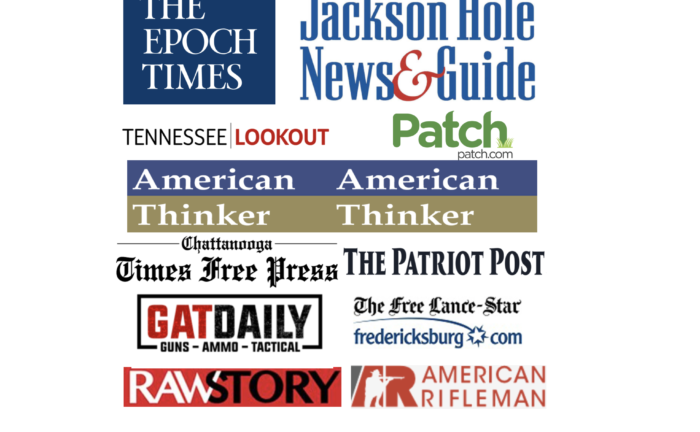 The House approved two bills on Thursday that expand background checks on individuals who are seeking to purchase or transfer firearms and lengthens the review period for background checks from three days to up to 20.

“It’s just a way for gun control advocates to impose what can be long waiting periods on people to be able to go and buy a gun,” Lott said.

The bills would still need Senate approval before becoming law, an outcome Lott said is unlikely, unless Democrats reach for the so-called “nuclear option” and get rid of the Senate rule that requires a 60-vote majority to pass most legislation.

“If the filibuster remains, I don’t think they’ll get it passed,” Lott said, noting that the two bills are a kind of “testing the water” of tighter gun legislation on the part of Democrats before potentially moving forward with more ambitious proposals.

Lott, who holds a doctorate from the University of California at Los Angeles and is perhaps best known for his 1998 book, “More Guns, Less Crime,” told NTD in the interview that advocates of tighter gun laws make the false correlation that gun ownership drives crime. Rather, it is public perception of crime that drives people to buy guns out of concern for their safety.

“The reason why people went out and bought the guns was because of the increased crime and increased fear that they had,” he said. “It wasn’t the gun sales, and then the increase in violence. It’s that people were seeing riots, they were seeing that police weren’t able to respond, they saw with the coronavirus police being not allowed to go and respond to calls. And that is what caused them to go and buy guns, not the reverse,” Lott added. . . .

According to the Wyoming Division of Criminal Investigation, there are currently over 30,000 valid permits issued in Wyoming. A report from the Crime Prevention Research Center, a nonprofit started by gun rights advocate and economist John Lott, revealed that the number of concealed handgun permits across the United States rose to almost 19.5 million as of 2020. The report also noted that outside of California and New York, about 9.2% of adults in the U.S. have a concealed handgun permit.

Moms Demand Action leaders testified against the bill in the Senate Judiciary Committee, saying an increase in the number of people carrying guns would lead to “mistakes” and more deaths.
“It’s about the money, a great deal of it for the gun manufacturers and gun lobby,” said Linda McFadyen-Ketchum, spokeswoman for Moms Demand Action.

However, John Lott, president of the Crime Prevention Research Center, said permits stop people who need protection from being able to carry, including minority residents and possibly women who are victims of domestic violence.

Thirty-one states already have some form of permit-less carry. Tennesseans don’t have to be permitted to store guns in their cars.

“Not a single one of these states has seen fit to reverse this law,” Lott said during testimony. He added that none of the “dire predictions” about permit-less carry have come true in other states,
Instead, violent crime rates dropped after five years in states that adopted permit-less carry, according to Lott. . . .

HB 1909, which would permit any school board in the commonwealth to designate non-school property it owns or leases a “gun-free zone,” with the exception of armed security guards and law enforcement officers. But simply declaring a “gun-free zone” doesn’t make it so. According to the Crime Prevention Research Center, 98 percent of mass public shootings in the U.S. since 1950, including dozens of school shootings, have occurred in places where it was already illegal for citizens to bring guns. This virtue-signaling bill was sent to a conference committee on Wednesday after the House unanimously rejected Senate amendments that changed the wording from “property” to “administrative building.”

Senate Democrats have also sounded the alarm over the DOJ’s hiring of gun rights advocate John Lott to serve as a senior adviser in the Office of Justice Programs, which they said in a letter raised “concerns about the Department’s compliance with requirements designed to maintain the continued integrity of the nonpartisan career civil service.”

It might be difficult to fire some of these officials, but the Biden administration could reassign them.

As the esteemed John Lott writes, “CBS is in a full-court press for gun control on its evening entertainment television shows. The bad guys are always white supremacists who use machine guns — supposedly AR-15s — to commit mass public shootings. Criminals in Mexico supposedly get machine guns from the United States. A father’s desire to protect his family only leads to tragedy when his daughter gets into the gun safe and uses the weapon in a mass public shooting. And guns in the home pose a danger for children. Gun registration is necessary for solving crime.”

They would also not pay any attention when John Lott showed us that it was statistically impossible for election results to be legitimate . . .

Scholar John Lott came out with a major report on how and why the practice is generally banned in Europe based on its threat to free and fair elections.

HB 1909, which would permit any school board in the commonwealth to designate non-school property it owns or leases a “gun-free zone,” with the exception of armed security guards and law enforcement officers. But simply declaring a “gun-free zone” doesn’t make it so. According to the Crime Prevention Research Center, 98 percent of mass public shootings in the U.S. since 1950, including dozens of school shootings, have occurred in places where it was already illegal for citizens to bring guns. This virtue-signaling bill was sent to a conference committee on Wednesday after the House unanimously rejected Senate amendments that changed the wording from “property” to “administrative building.”

The latest report from the Crime Prevention Research Center, with figures from 2020, indicates 19.48 million Americans currently hold one—a 34-percent increase since 2016. The total grew by more than 800,000 when compared to 2019, despite the increased number of constitutional carry states and regions that either slowed or stopped their issuance due to COVID-19 concerns. . . .