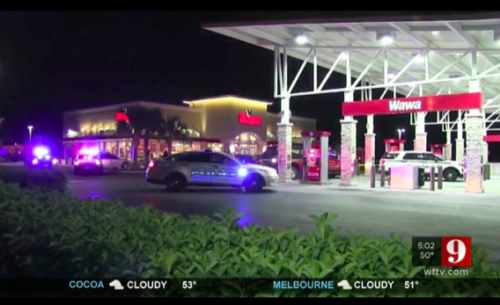 An Uber Eats driver is counting his blessings after he and a wanna-be robber drew guns on each other while he was on a delivery….


Once he’d made the delivery and turned to walk back to his car, the driver saw a man standing ‘aggressively’ and very close behind him.


The delivery man didn’t wait for something bad to happen.  Instead, he shouted, “Get awawy from me!” at the stranger.  The man, later identified by police as Gabriel Menchaca Palomino, 37, didn’t listen.  Instead, he asked, “Do you know what time it is?”


It was a thinly veiled attempt to distract the Uber driver.  Meanwhile, Palomino pulled a bandana tied around his neck up over his mouth and nose….


Once his face was covered, Palomino pulled a Glock handgun out of his pocket and pointed it at the driver.  Unshaken, the delivery driver pulled out a Sig Sauer P238 and pointed it right at Palomino’s chest….


He legally owned and was legally carrying the gun he pulled on the thug.

Officers learned the suspects entered the Vault with guns.


One of the suspects and the employee fired at each other, and the suspect was hit, the release says.


The suspects then ran from the business and fled to the Martinsville, Virginia area.

Williams Jr. pulled his silver Hyundai Accent in front of the victim’s vehicle, pulled out a black handgun and said, “You know what time it is,” according to a police report. The victim told police he took cover and pulled out his own gun for protection.


The man said Williams Jr. fired first, and then he returned fire. Williams Jr. got back into his Hyundai and sped away before crashing into a parked car, the report said. A witness told police two other people jumped out of the vehicle and ran toward Clifton Springs Road….

Two men, at least one in his early 20s, tried to rob the store, Bjerke said. Bjerke did not have immediate information on the age of the second man.


The store manager fired a weapon at one of the men and the two men fired four shots, Bjerke said.

The unidentified man, who had a concealed carry license, was questioned by Cocoa police. No arrests have been made in the case….


Police said two men started an argument inside Wawa, prompting a security guard to escort them outside.


The two men then turned on the security guard and knocked him to the ground in a struggle, police said.


A witness inside the convenience store went outside to help the fallen security guard.


Police said one of the men who fought with the security guard then “aggressively moved toward the witness,” prompting the man to fire at least one gunshot and striking one of the men involved in the altercation.

When police arrived, the victim told them he was getting out of his vehicle, when two people drove up, called out his name and pointed a weapon at him. The victim handed over his wallet and phone, officers said.


The victim then pulled out a gun and fired several gunshots at the robbers, police explained. The robbers reportedly fled in a smaller, black SUV, but it was not clear if either of them were shot.

A 60-Year-old Miami man said he was forced to shoot and kill a gunman who had broken in to his van early Monday morning in an attempt to rob him of his jewelry.


“The guy I killed last night, he put an AK-47 to my damn face,” said Donovan Stewart.


Stewart told CBS4’S Peter D’Oench that he had to act quickly because he was worried about the safety of his 11-year-old son and girlfriend who were in the van with him….

According to the sheriff’s office, three armed men entered the market and demanded money from a clerk. Officials said at least one store employee exchanged gunfire with the three suspects, striking and killing one of them.

The suspect walked into the Shell station in the 11400 block of Richmond Avenue around 7 a.m., pulled a pistol and demanded money from the cashier, according to police. The clerk complied with the suspect and started cleaning out the register, at which point the suspect became distracted with a set of lottery tickets behind the counter, police said.


With the suspect’s attention away from him, the clerk pulled a pistol of his own and started shooting at the gunman, police said. The robbery suspect was struck at least once, police said.

A Costco shopper opened fire at two suspects who broke into his car outside the Arlington store Friday morning….


The suspects shortly fled the scene with the victim’s toolbox and have not been located yet.


Officers responded to a robbery in progress at the Hardee’s on Anvil Block Road in Ellenwood about 6:30 a.m., Clayton County police said.


While they were en route, a man delivering bread to the restaurant saw what was happening and challenged the robbery suspect by pulling out his own gun, authorities said.


A “short gun battle ensued,” leaving the robbery suspect wounded, police said. The suspect, identified as Demario Kentrell Parrish, managed to escape the restaurant after being shot twice, but he was later arrested at a home on Jewell Terrance Road.

Investigators with CPD believe that Burton agreed to meet a man and woman who were attempting to sell shoes at the location. Instead of buying the shoes, Burton held them at gunpoint.