NBC Channel 4 in Nashville has the nightmare that Nikki Goeser is still facing with the stalker who murdered her husband and who has been still stalking her from prison. Here is Nikki’s description of what has happened from a piece that she published at Townhall.com.

“My husband Ben was murdered in front of me by a man who was stalking me 11 years ago. I waited for a trial for three long, agonizing years, praying that we would get real justice. The evidence was overwhelming that this was first degree, premeditated murder.

“When the police searched my stalker’s vehicle at the crime scene, they found two more guns, ammunition, a baseball bat, binoculars, gloves, rope and a knife. My stalker posted to social media the day before: ‘Predator versus prey, I know who you are, run. Where will you work where I can’t find you? At home, at dinner in your sleep, every waking moment.’ My stalker purchased a shoulder holster, baseball bat and binoculars the day of the murder. He asked oblivious acquaintances where he could find us that night and then he hunted us down. Despite all of the stress, trauma, anxiety, and overwhelming evidence proving first degree murder, liberal judge Seth Norman of Davidson County, Tennessee, ended up dropping the charge to only second degree.

“My husband’s murderer (“Hank Wise”) was only sentenced to 23 years with no parole. But even that was a lie. Most of the general public doesn’t know this, but victims are lied to everyday in criminal courts across the nation.

“My stalker has been allowed to earn early release/good behavior credits. So he does not have to serve his full sentence. But it gets worse. From prison, he has been sending me twisted love letters for years that are meant to traumatize and terrorize me. However, despite this obvious crime from behind bars, the criminal justice system has not revoked his early release credits. My pleas have been left disregarded.” 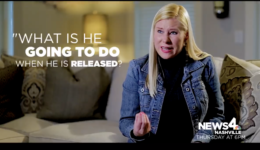 Harassed from Prison: Preview of News 4 in Nashville Segment on the threat facing Nikki Goeser 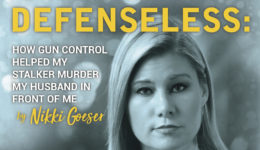 Just released: Audio version of Nikki Goeser’s “Stalked and Defenseless: How Gun Control Helped My Stalker Murder My Husband in Front of Me”