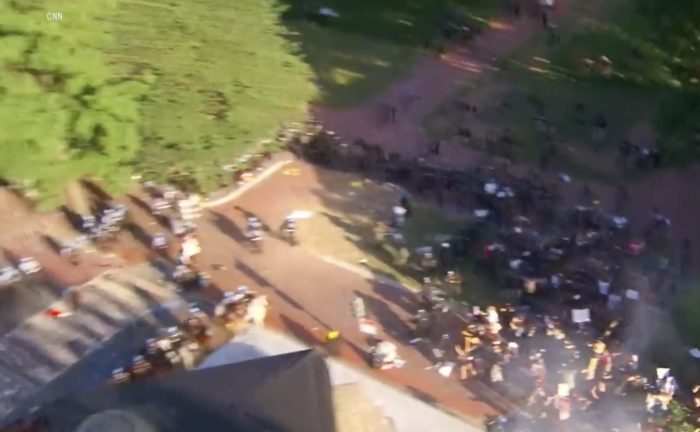 Apparently, the peaceful protestors outside the White House apparently weren’t so peaceful.

More than 50 Secret Service agents were injured, fires set by rioters blazed near the White House and authorities were searching for car bombs late Sunday as protests over the death of George Floyd continued to roil the capital just two days after President Trump had to be taken to a bunker for his safety.

A senior official in the direct chain of command for defending Washington D.C. told Fox News of the injuries to Secret Service agents, some of whom were hurt by rioters throwing bottles and Molotov cocktails in Lafayette Park, just across from the presidential residence. . . .

CBS News went so far as to edit out comments that Attorney General William Barr made about the violence of the protestors at Lafayette Park.

Left out of the interview that aired on CBS on Sunday morning was Barr’s detailed accounting of much of the violent context of that perimeter expansion, including that “bricks and inflammable liquid” were being thrown at police in Lafayette Square near the White House as rioters “were trying to get entry” over the fences, the five dozen officers guarding Lafayette Square who were “lost” the night prior in the violence, and the individuals who at the time of their forced dispersal “wrestled with the police officers trying to tear their shields from them, in one case, struggling to get one of the police officer’s guns.”

Some of the most colorful descriptions of the violence facing police officers at Lafayette Square were clumsily spliced out of the middle of Barr’s answers to questions. The rather important detail about a protester trying to get a police officer’s guns was simply removed from the end of the interview. These remarks were edited out of an interview in which Barr said media mantras about Park Police facing peaceful protesters were lies.

“They were not peaceful protesters. And that’s one of the big lies that the- the media – seems to be perpetuating at this point,” Barr said . . .

“Peaceful protests” result in many dozens of police officers injured

At Townhall: How the Media Created a Society That Accepts Refusing Service to Police Officers