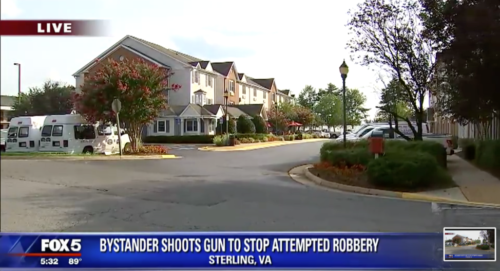 An elderly man is credited with helping to stop a couple from getting robbed in Northern Virginia.

According to Loudoun County Sheriff Mike Chapman, the man sprung into action and fired warning shots from his personal gun as that couple was being assaulted in the parking lot of a hotel near Dulles Airport….

Investigators say that’s when he went up to a man and woman who were walking back to their hotel room from breakfast and began grabbing for the man’s watch on his wrist. The commotion caught the attention of another hotel guest.

“As this was going on there was a witness who was outside on the patio… a senior citizen witness and he saw what was going on here. So, he went out to his car, which was nearby and retrieved his gun. He went back and tried to get this guy to stop the assault and at that point, but the suspect, Jeremiah Bradley, then attempts to lunge at the gentleman with the handgun and he fired a shot. Did not hit Bradley but did fire a shot and told him to get down. He did get down on the ground… but tried to get up again and go after him. He fired another shot or two and it was at that point he told him he had to wait there until law enforcement arrived, which he did,” said Chapman. . . .

Spartanburg police said Monday a man who shot and killed another man following an argument at the Lowe’s Home Improvement store will not be charged because he acted in self-defense….

Belk confronted Guy Edward Holler inside the store, where they got into a verbal argument.

Belk continued to follow Holler, challenging him, and Holler attempted to avoid Belk by going down a different aisle in the store.

Belk then went outside to his truck and retrieved a 4-foot-long piece of lumber and waited for Holler in the parking lot.

When Holler started toward his own vehicle, Belk approached him from behind.

Witnesses said Holler was sitting in his vehicle when Belk confronted him a second time. Holler told Belk to back away, but Belk continued to advance toward Holler.

Belk was standing about 4 feet in front of Holler, pointing the lumber, when Holler fired one shot, striking Belk in the upper torso.

Belk was transported by EMS to Spartanburg Medical Center where he died….

An employee shot and killed a robber inside a Metro PCS store in Southwest Philadelphia, according to investigators.

Police said an unidentified man in his late 30s armed with a gun tried to rob the store on 70th Street and Elmwood Avenue shortly after 4 p.m. Monday.

NBC10 obtained surveillance video from inside the store showing the suspect walking inside, displaying a weapon and throwing a bag on the counter in front of the employee. The employee, who investigators said has a permit to carry, then quickly pulled out his own gun and opened fire, shooting the suspect multiple times. . . .

The suspect was pronounced dead at the scene . . . .

. . . . Sheriff’s determined when they arrived that Hayes was making threats while inside the restaurant.

Bartlett confronted Hayes in an attempt to protect the restaurant’s customers and employees. Bartlett, who has a concealed carry permit, drew his weapon and began to order Hayes to drop the knife, the sheriff’s office said.

According to the sheriff’s office, Hayes refused to comply and began to leave the restaurant. Bartlett pursued Hayes outside where he was able to convince Hayes to drop the knife.

“Due to the heroic actions of Mr. James H. Bartlett, deputies were able to take the suspect into custody without injury or loss of life,” the sheriff’s office posted on Facebook. . . . .

The man told deputies he was sitting inside of his girlfriend’s vehicle when another man opened the driver’s side door, sat down and then told him to get out of the vehicle. . . .

Deputies say the attempted carjacker appeared to have a gun and pointed it at the man, telling him to get out of the vehicle.

While exiting the vehicle, the victim pulled out his own gun and shot the carjacker in the stomach . . . The man who defended himself will not face any charges. . . . .

All indications are that the person killed was one of the robbers, and he died at the hands of his supposed victim. . . .

The unidentified assailants were reportedly “brutally attacking a victim within the establishment, when the victim was able to defend themselves and shoot the two subjects,” according to the police department’s spokesman, Lt. Jeff Keenum. It was during that altercation that the victim was able to fire his gun and, given the close proximity of all three to each other, it isn’t surprising that one was killed. . . . .

Charges are pending for a man accused of ramming his truck into cars at a Fort Mill plaza. The suspect was eventually stopped by another man with a gun. . . .

Witnesses said the suspect got in his black truck and continuously slammed into three to four cars. He was stopped by one of the drivers, who was carrying a gun. The man with the gun allegedly hit the suspect in the head with the weapon….The York County Sheriff’s Office said the person with the gun will not face charges and is a legal concealed-carry gun owner. . . .

A Youngstown store owner shot two men alleged to be involved in an armed robbery at his store Saturday afternoon.

“Two men entered the store with their guns out,” said Youngstown police Sgt. Ed Kenney. “When they stepped towards store employees, the store owner was forced to fire on them to protect his employees.

The search continues for two suspects who walked into a Phenix City jewelry store in broad daylight and tried to rob it at gunpoint.

Rusty Gorman, owner of Custom Jewelers pulled out his own gun to fight back and had every right to do so by the “stand your ground” law….

“If you are at a business and you saw men come in with masks on and they were armed then you would have the right to defend yourself and also others in the business,” said Justin Clark with the Russell County DA’s Office.The two men ran from the scene on foot from the side door of the jewelry store leaving behind their car. . .

← CBS Hawaii 5-O's Continued Obsession With Criminals Using Machine Guns At Townhall: Headlines Around the World Say the U.S. Has the Worst Record on Coronavirus Deaths But the Data Says Otherwise →