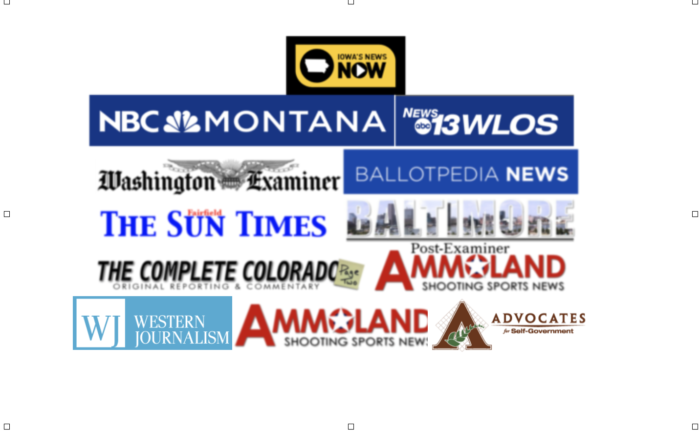 CPRC in the News: Washington Examiner, Ballotpedia, Inside Sources, and other news stories

Dr. John R. Lott, Jr., a gun rights advocate who founded the Crime Prevention Research Center, said concerns that the police could handle a possible uptick in crime are warranted and are prompting some to take self-defense into their own hands.

“People are concerned about their safety, and it’s no different than, you know, wanting to have a fire extinguisher because of the possibility you might have a fire,” Lott said. . . .

In an op-ed for The Wall Street Journal published April 10, John R. Lott Jr., president of the Crime Prevention Research Center, said, “‘Absentee ballots remain the largest source of potential voter fraud.” That quote isn’t from President Trump, who criticized mail-in voting this week after Wisconsin Democrats tried and failed to change an election at the last minute into an exclusively mail-in affair. It’s the conclusion of the bipartisan 2005 report of the Commission on Federal Election Reform, chaired by former President Jimmy Carter and former Secretary of State James Baker III. … Mail-in voting is a throwback to the dark old days of vote-buying and fraud. Because of this, many countries don’t allow absentee ballots for citizens living in their country, including Norway and Mexico. Americans deserve a more trustworthy system.” . . .

Economist John R. Lott, writing for the Wall Street Journal, noted recent high-profile incidents of election fraud directly linked to mail-in or absentee ballots: 700 fraudulent mail-in ballots with fake signatures in a Dallas City Council election; and a North Carolina congressional race’s results thrown out after a Republican operative was caught requesting 1,200 ballots on behalf of voters, and then collecting them from voters’ homes when they arrived.

“Mail-in voting is a throwback to the dark old days of vote-buying and fraud,” Lott noted. “Because of this, many countries don’t allow absentee ballots for citizens living in their country, including Norway and Mexico.” . . .

A red flag law would not be a compelling fix. After all, gun researcher John Lott observed data from 1970 to 2017 and came to the conclusion that “Red Flag laws appear to have had no significant effect on murder, suicide, the number of people killed in mass public shootings, robbery, aggravated assault or burglary. There is some evidence that rape rates rise. These laws apparently do not save lives.”

Furthermore, the state of Connecticut passed a red flag law in 1999, making it a forerunner in enacting such policies. Like many other forms of gun control, Connecticut’s red flag law could not prevent Adam Lanza from carrying out his horrendous massacre at Sandy Hook Elementary School in 2012. . . .

According to John R. Lott Jr., the noted conservative economist and political commentator, that’s entirely wrong. In a situation where no one knows precisely how to manage a pandemic, he says, the United States’ response has actually been world-class.

In a piece published Wednesday at Townhall, Lott argued that media outlets were misreading statistics, and not just in terms of neglecting to put things in per capita terms.

“Many use the number of deaths as a measure of how the U.S. is faring relative to other countries, but that is extremely misleading. It would be the same comparing the number of rapes in Sweden and the United States,” Lott wrote.

“It makes no more sense to compare the number of Wuhan coronavirus deaths in the U.S. versus other countries than it does to compare rape rates. But looking at the death rate also isn’t perfect,” he continued.

In addition to that, Lott stated that because coronavirus was almost certainly introduced into different countries at different times, useful comparisons are difficult.

“The length of time of exposure to the virus also matters, and different countries faced exposure at different times. A country that has had been the chance to expose people over months is going to have a lot more potential deaths than a country where exposure has just taken place over a few days.”

For instance, take Germany. Even The New York Times ran an article which praised the job that Germany was doing: “A German Exception? Why the Country’s Coronavirus Death Rate Is Low.”

The United States also compares relatively well with other highly developed countries when it comes to coronavirus deaths.

“When we adjust for population, it is clear that the U.S. has fared very well at each date after the first death compared to Western Europe. Belgium, Germany, Italy, the Netherlands, Norway, Spain, Sweden, Switzerland, and the United Kingdom all have higher coronavirus death rates than the U.S.,” Lott said of what happens when you look at the data from the time of the first death. . . . [More is available here].

Outside of hypotheticals, “Gun Culture 2.0” also digs into the statistics behind the argument. Everything started with Dr. John Lott’s research from 1996 which argued more guns equals less crime. However, when other research began taking a hard look at his work they found quite a few flaws. Cassandra Crifasi of the Center for Gun Policy and Research at John Hopkins is one of the people working to dispel the false information. New research shows that states with right to carry laws saw an increase in violent crime rates. . . .

Of course, this is Vice, which is very biased against gun ownership, and they will never acknowledge that a lot of other scholars have found similar results to Dr. Lott’s.

A robust body of academic literature has found that more people legally carrying weapons correlates with either reduced violent crime or no effect.  By careful selection of start and stop dates, and complicated statistical methods, partisan researchers can, and do, create “studies” to claim increases in crime with an increased carry of firearms.

Here is an article that gives a synopsis of what is known.

Here is a link to John Lott’s response to critiques of his academic work.

According to the Crime Prevention Research Center, between 1950 and 2018, 97.8 percent of all public mass shootings occurred in gun-free zones. Similarly, in the 20 states that allow teachers to be armed, there have been no school shootings and no accidents or injuries caused by firearms possessed by teachers.(30) The 97.8 percent figure has been widely disputed based on what constitutes a “mass shooting”, and what is a “gun free zone” versus what some researchers term a “gun restricted” zone. Looking at 2019, if the definition of a gun free zone is one in which nobody but the police or hired security can carry a firearm, and if a mass shooting is defined as one where the number of killings or woundings exceeds the national mean by three standard deviations of all shootings in the country, then the United States had four mass shootings in 2019. (31) They were in Dayton, Ohio; Gilroy, California; El Paso, Texas; and Virginia Beach, Virginia.

“While there is some weak evidence that safe-storage laws reduce juvenile gun suicides, those intent on committing suicide appear to easily substitute into other methods, as the total number of juvenile suicides actually rises (if insignificantly) after passage of safe-storage laws,” says the paper.

Lott and Whitley also concluded that safe-storage laws can actually increase crime in the community.

“The only consistent impact of safe-storage laws is to raise rape, robbery, and burglary rates, and the effects are very large. Our most conservative estimates show that safe-storage laws resulted in 3,738 more rapes, 21,000 more robberies, and 49,733 more burglaries annually in just the 15 states with these laws. More realistic estimates indicate across-the-board increases in violent and property crimes,” the paper says.

“I was just standing up for the Constitution, and I did it in a professional manner that did not delay the bill,” Massie told Fox News. “This is the biggest transfer of wealth in human history.” . . .

There has to be room in the “Big Tent” for principled standard-bearers who caution us when we stray from core principles. I’d argue GOP pols should all be that way. To deride such voices as “third rate,” to falsely attribute motives, to insult and to try to destroy a man who has been more supportive than most more often than not is hurtful, wrong, uncalled for, and unworthy of a true leader. I doubt the president will see my plea, but perhaps he will see and be persuaded by the excellent “In Defense of Congressman Thomas Massie” by economist and author John Lott of the Crime Prevention Research Center. . . .

Waiting periods for the purchase of firearms are controversial statutes. There are no academic studies that show them to reduce violent crime. From the Crime Prevention Research Center amicus brief in the case: