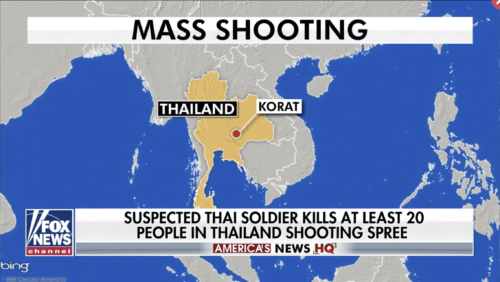 This is the second mass shooting in less than a month in Thailand. In the previous attack, a school director used a handgun to kill three people, including a two-year-old boy, and wound four others. Regarding the latest attack, Skynews reports that at least 26 people were murdered and 57 wounded by a soldier in Korat, Thailand. The murderer killed people at a house in the city, the military base, and a mall. The murderer was shot dead at 3 AM local time on Sunday in Thailand. Our research on mass public shootings across countries is available here, and it shows that these types of attacks are more common outside the US than in the US.

“We don’t know why he did this. It appears he went mad,” a defense ministry spokesman said. . . .

The suspect – named by defence officials as Sgt. Jakrapanth Thomma – posted a video on Facebook and even posed for a selfie in front of the burning building.

He is now holed up in a basement at the mall in the city of Nakhon Ratchasima, also known as Korat, in a dramatic stand-off with cops.

The Health Minister confirmed a member of the Thai security forces was killed – bringing the grisly death toll to 21.

Police and the army have now stormed the shopping centre, with reports shots were heard as cops were met with angry shouts and gunfire.

Hundreds of shoppers who were taken hostage inside the mall have since run free. . . .

Thailand has about six million registered guns in a country with a population of 69.8 million and about 55 million adult. If those licensed to own a gun owned one gun each, that comes to about 8.6% of the population and 11% of adults. However, those are clearly over estimates of the percent of the population that legally owns guns.

You need one license for each gun that you own, and you must have a “genuine reason”

“universal background check” that includes “income” among its considerations. The law requires that a record of the acquisition, possession, and transfer of each privately held firearm be retained in an official register.