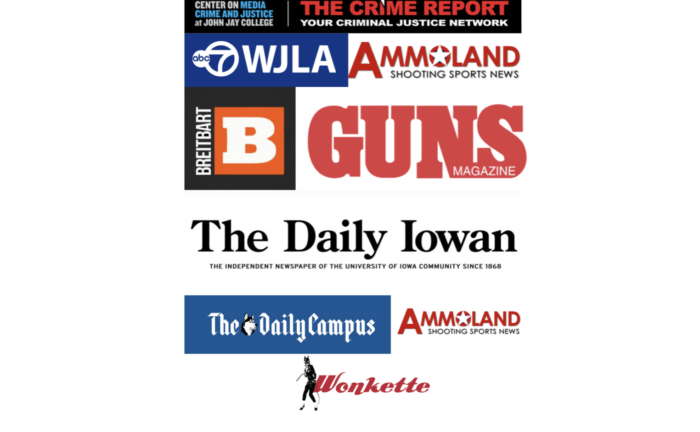 The number of Americans with concealed-carry permits has reached almost 18.7 million in 2019, up from 12.8 million in 2015, says the Crime Prevention Research Center, a gun-rights group. That growth was fueled by states like Oklahoma and Kentucky, which legalized carrying a concealed firearm without a permit last year. . . .

This last sentence is of course incorrect. The passage of Constitutional carry laws in states such as Oklahoma and Kentucky reduce the number of permits, since those laws mean that you don’t need a permit to carry in those states.

But other experts say studies on Red Flag laws need much more data and time to truly show effectiveness. One study from the Crime Prevention Research Center said these laws will have no significant effect on homicide and suicide rates according to statistical modeling. . . .

The “good guy with a gun” trope is one of the few that gets repeated to the point of redundancy because it’s actually true. A study published in 2018 by the Crime Prevention Research Center showed that concealed carry permit holders are even less likely than police officers to commit firearm violations. Civilian heroes such as Jack Wilson — who stopped a Texas church shooting earlier this month — have saved unarmed, innocent lives for generations. . . .

In more general terms, universal background checks are arguably the most prominent piece of legislation in Bloomberg’s gun control portfolio.  Yet Crime Prevention Research Center president John R. Lott has shown that states that adopted such checks “experienced a 15 percent increase in per capita rates of mass public shooting fatalities.” Those states also witnessed “a 38 percent increase in the rate of injury from [the mass public shootings].” . . .

According to the Crime Prevention Research Center’s most recent estimate, more than 18.6 million of us are licensed to carry. Wilson and several other members of the church congregation have formed a volunteer security team. One of their colleagues, Richard White, was the first man shot. . . .

The Crime Prevention Research Center (CPRC), headquartered in Virginia where guns are also a hot button issue, estimates more than 18.66 million citizens are now licensed to carry across the states. That’s 18.6 million voters, enough to swing many an election this fall. . . .

Professor John Lott’s work shows a statistical correlation between increased numbers of people with carry permits and a decrease in violent crimes.

These burdensome changes will not benefit public safety. For his book More Guns Less Crime, Economist John R. Lott attempted to measure the effects of burdensome Right-to-Carry training requirements. Lott determined that “The presence or length of training periods typically show no effect on crime…” Lott also found that an increase in training requirements and permit fees will lower the rate at which individuals obtain Right-to-Carry permits. . . .

Only John Lott could kill a much-repeated “fact” so cleanly.

In 2018 it was widely reported that Americans own 46% of the worlds civilian-owned firearms. This statistic came from the Small Arms Survey, a Geneva, Switzerland, based organization that calls itself “a global centre of excellence” that “generates evidence-based, impartial, and policy-relevant knowledge and analysis on small arms….” It says this just before stating: “Our main objective is to reduce the illicit proliferation of small arms and light weapons and their impacts.” This, of course, isn’t really a declaration of impartiality, but is rather an announcement that they are an organization with a gun-control agenda.

Lott shot holes in this “fact” at a “research breakfast” this week held by the National Shooting Sports Foundation (NSSF) at the Shooting, Hunting, Outdoor Trade Show (SHOT Show) in Las Vegas.

“The Small Arms Survey is bunk,” said Lott, who is president and founder of the Crime Research Prevention Center. “I spent three years asking the Small Arms Survey for its research data. They never gave me the data they say they used to make the claim that Americans own more guns, per capita, than any other nation.” . . .

The Crime Prevention Research Center, a gun-rights group, boasted that the number of Americans with concealed-carry permits rose to almost 18.7 million in 2019. It was a still depressing 12.8 million in 2015. Gun lovers don’t consider this statistic evidence that Donald Trump has made America significantly less safe. No, Trump’s actually delivered exponentially more freedom for us than that tyrant Barack Obama. We’re now free to secretly pack heat in the event someone at the supermarket tries to take the last melon from us. . . .