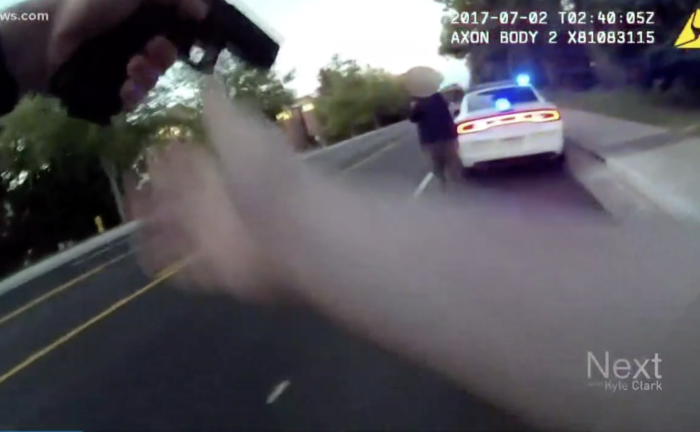 In just the fifth case since Colorado’s Red Flag Law went into effect on January 1st, a mother whose son was shot by a police officer has tried to use the law against the officer. The officer told her son dozens of time to put down the knife that he was threatening people with, but he refused to do so. The above picture is from the officer’s body camera where he shot her son.

. . . In her petition, Holmes wrote that Morris is a family member, specifically noting that they have a child together. That is not true.

On her petition, [Susan] Holmes also checked the box next to the question of whether this person has posed “a credible threat of or the unlawful reckless use of a firearm.” In her explanation, she wrote: “Phil Morris used his firearm to recklessly & violently threaten and kill 19 year old Jeremy Holmes.”

Jeremy Holmes died July 1, 2017, in a confrontation that investigators described as a “suicide by cop.” . . .

The judge did not dismiss Holmes’ filing, and will consider whether to take away the officer’s guns. Whether the police and DA will charge Homes with making a false claim remains to be seen.