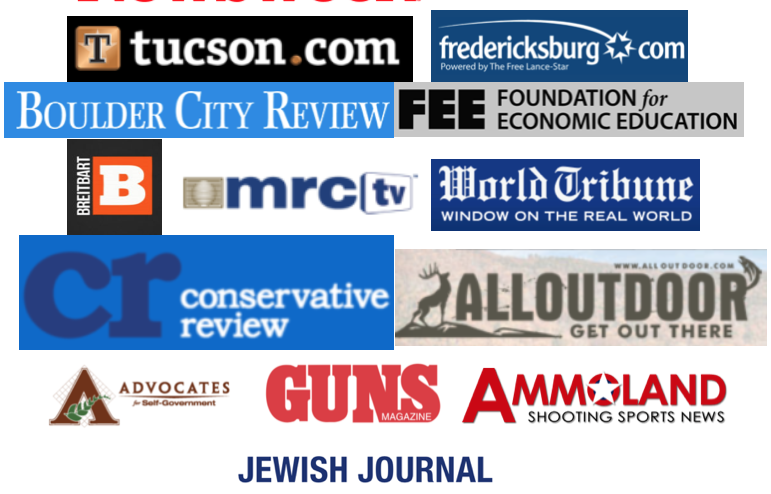 Crime Prevention Research Center in the News: Newsweek, The New Yorker, and many other places

“We need to buy back every single assault weapon,” he later added in a tweet.

In response, political commentator and gun rights advocate John Lott. Jr. tweeted: “@BetoORourke, could u pls explain how banning guns based on their looks helps? Over 80% of the#masspublicshootings (MPS) involve either exclusively handguns or handguns with another weapon.” Coulter later retweeted Lott Jr.’s post.

Then there’s the analysis released in December by Dr. John Lott, president of the Crime Prevention Research Center, and Dr. Carlisle Moody of the College of William and Mary that combed through 36 years of data on the effect of red flag laws already enacted in Connecticut (which passed the first red flag law in the nation in 1999), Indiana (2005), California and Washington State (2016).

The study concluded that “red flag laws had no significant effect on murder, suicide, the number of people killed in mass public shootings, robbery, aggravated assault, or burglary….These laws apparently do not save lives.” . . .

Corey said that she’d never bought a gun from a stranger. “There are loopholes for everything, right?” she went on. “Drugs are illegal, but you can still buy them.”

Why did she think there were so many mass shootings in this country, compared to other countries? Does it have to do with the fact that we have so many guns?

“No,” Corey said. She recommended that I “sit in on one of the John Lott seminars.” Lott is an economist and gun-rights advocate best known for the “more guns, less crime” hypothesis that he put forward in a 1998 book of that name, which was based on a large statistical study that has been disputed by numerous studies since.

“Gun control is really against law-abiding people,” Corey went on. “People who want to kill people aren’t following the law.” . . .

John Lott, author of the book, “More Guns, Less Crime,” is president of the Crime Prevention Research Center, another outstanding source for info on this subject. He writes:

By 66 percent to 32 percent, economists and criminologists answer that gun-free zones are “more likely to attract criminals than they are to deter them.” A 60 percent to 40 percent margin thinks that guns in the home do not increase suicides. And a 62 percent to 35 percent spread says that guns are used in self-defense to stop crime more often than in the commission of crime.

This may explain why even The New York Times hasn’t yet put a billboard up by its offices that screams, “This is a Gun-Free Zone. There are No Guns Here.” . . .

Astorino — who is also a CNN contributor — may have been understating his case since crime researcher John Lott has argued that none of the mass shootings that have targeted public places would have been stopped by expanding background checks to private purchases, which is what gun control advocates want.

Moodie-Mills soon jumped in to call President Trump a “clown” who “literally does not care about lives” as she also called the NRA a “lobby of death.” . . .

According to scholar John Lott, Jr., the most important measure to lower gun violence — perhaps counter-intuitively — is expanding concealed carry. Criminals are less likely to shoot if someone may shoot back. . . .

By 66 percent to 32 percent, economists and criminologists answer that gun-free zones are ‘more likely to attract criminals than they are to deter them.’ A 60 percent to 40 percent margin thinks that guns in the home do not increase suicides. And a 62 percent to 35 percent spread says that guns are used in self-defense to stop crime more often than in the commission of crime. (From ‘More Guns, Less Crime’ by John Lott) . . . .

The coalition also cited John Lott Jr., author of “More Guns, Less Crime” and “The War on Guns”, who once noted: “It was common for schools to have shooting clubs. Even in New York City, virtually every public high school had a shooting club up until 1969. It was common for high school students to take their guns with them to school on the subways in the morning and turn them over to their homeroom teacher or the gym coach so the heavy guns would simply be out of the way. After school, students would pick up their guns when it was time for practice.” . . .

Once thought to be impenetrable, urban centers may start to see gun rights slowly creep their away into political discourse. The decades of work that gun researcher John Lott is finally beginning to pay off. But he isn’t alone. . . .

John Lott, founder and president of the Crime Prevention Research Center, put the lie to arguments that armed citizens would only increase the chaos, shoot the wrong people or get shot themselves. In a discussion on Fox News, Lott offered an interesting observation that was buried in a story carried by Sinclair Broadcasting affiliates.

The story said Lott “suggested that concerns about individuals with concealed carry permits causing more harm than good are unsupported by the data.”