The attack at a public school in Suzano, Brazil on March 13th, 2019, resulted in eight deaths and 23 people wounded. Two former students committed the massacre, and they reportedly modeled their attack after the Columbine attack, the 20th anniversary of which will fall next month. The weapons used were a .38 caliber revolver, crossbow, bow and arrow, and hatchet. Updated: On March 18th, four people were killed and four were wounded on a tram in a Utrecht, Netherlands attack.

After the two Mosque shootings in Christchurch, New Zealand, the NZ PM reports that 50 people were killed and another 50 wounded, 20+ seriously injured. At one of the Mosques, when the attack started at 1:45 PM local time, some 400 people were present for Friday prayer. The killer, Brenton Tarrant, 28, who has been charged with the killings and has lived off-and-on in New Zealand for years, used two shotguns, two semi-automatic weapons, and one lever-action firearm during the massacres.

Our data on mass public shootings from around the world are available here.

Brazil has some of the strictest gun control laws in the world. In 1999, less than one percent of adults were legally licensed to own a gun, and most of these were police officers. Self-defense is not considered as an acceptable reason to own a gun.

New Zealand isn’t as restrictive, but they do have an assault weapon ban and people aren’t allowed to legally carry concealed guns. Only 250,000 (6.56%) of New Zealand’s 3.81 million adults have licenses to own a gun.

The graph below shows the number of people who have been issued permits each year in Brazil. With a population in 2019 of 215 million with 74% of those being 15 years or older, the percent of the adult population with a permit is extremely low. Permits last for five years, so the number of people at the end of 2018 who had permits was about 8,834. Given that there are 158.5 million people fifteen or older, the percent of those with permits is 0.0056%. 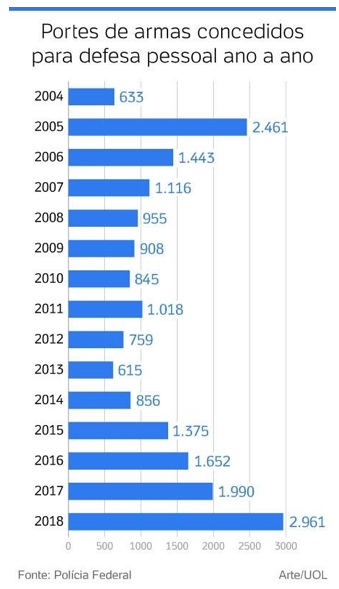 ← On One America News: Constitutional Carry Laws getting passed in the States On NewsMax TV: How Democrats are trying to make it costly for law-abiding citizens to own guns →