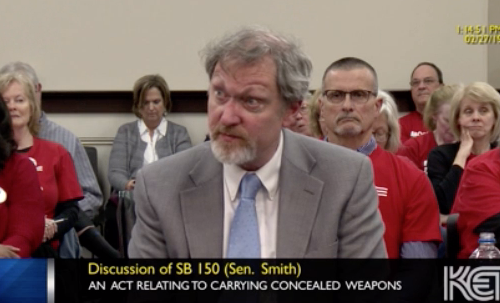 Dr. John Lott testifies before the Kentucky House Judiciary Committee regarding Constitutional Carry. Dr. Lott was the first speaker on the bill. He was invited by Representative Savannah Maddox, the sponsor of the bill and a member of the Judiciary Committee. The vote on the bill was 12 for – 8 against – 3 abstain. The state Senate has already approved the bill by a 29-8 vote. The vote was largely along party lines, though on Democrat did vote for the bill. The more difficult task was to expected to be passing the bill out of the House Judiciary committee. The bill will be voted on by the full state House on Friday, March 1st, where it is expected to pass. With Oklahoma’s governor making it the 15th Constitutional Carry state, Kentucky should become the 16th in just a few days. These numbers would be 16th and 17th if you include Montana where people can carry without a permit in 99.4% of the state.