Over and over again, people working for Michael Bloomberg’s gun control organizations accuse Dr. John Lott of being a “gun lobby shill.” Neither Lott’s research nor the CPRC has received even $1 nor has he applied for funds from any gun organization or gun or ammunition manufacturer. Shannon Watts, founder of the Bloomberg-funded Moms Demand Action, tries to back up her allegation by referring to charges leveled by the Violence Policy Center in the 1990s.

Research conducted by John Lott, purporting to show that relaxed concealed weapons laws reduce crime has been the subject of severe criticism not just for its methodological shortcomings, but also for its funding source. These questions have focused on the ties to the firearms industry of the funder of Mr. Lott’s fellowship, the John M. Olin Foundation.. . . . .

Watts Tweeted a link to the Violence Policy Center claims. 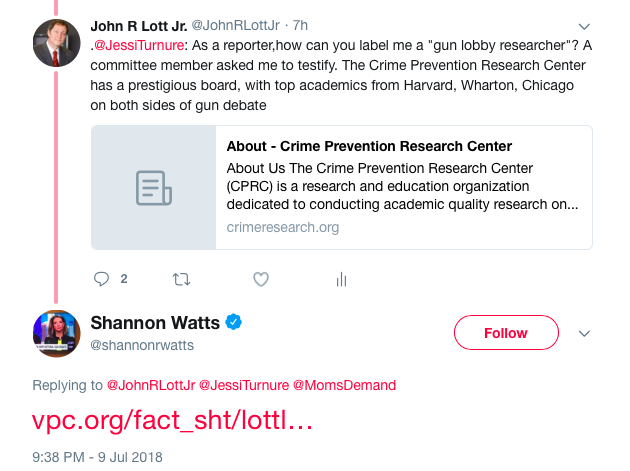 This charge was originally raised when the Wall Street Journal ran a letter from then-Congressman (now Senator) Charles Schumer of New York.

Gun-Control Thesis Is a Shot in the Dark

… [various anti-gun arguments snipped in the interest of space]

…I’d like to point out one other “association.” The Associated Press reports that Prof. Lott’s fellowship at the University of Chicago is funded by the Olin Foundation, which is “associated with the Olin Corporation,” one of the nation’s largest gun manufacturers. Maybe that’s a coincidence, too. But it’s also a fact.

A response was provided by William Simon, former US Treasury Secretary and then President of the Olin Foundation:

An Insult to Our Foundation

As president of the John M. Olin Foundation, I take great umbrage at Rep. Charles Schumer’s scurrilous charge (Letters to the Editor, Sept. 4) that our foundation underwrites bogus research to advance the interests of companies that manufacture guns and ammunition. He asserts (falsely) that the John M. Olin Foundation is “associated” with the Olin Corp. and (falsely again) that the Olin Corp. is one of the nation’s largest gun manufacturers. Mr. Schumer then suggests on the basis of these premises that Prof. John Lott’s article on gun control legislation (editorial page, Aug. 28) must have been fabricated because his research fellowship at the University of Chicago was funded by the John M. Olin Foundation.

This is an outrageous slander against our foundation, the Olin Corp., and the scholarly integrity of Prof. Lott. Mr. Schumer would have known that his charges were false if he had taken a little time to check his facts before rushing into print. Others have taken the trouble to do so. For example, Stephen Chapman of the Chicago Tribune looked into the charges surrounding Mr. Lott’s study, and published an informative story in the Aug. 15 issue of that paper, which concluded that, in conducting his research, Prof. Lott was not influenced either by the John M. Olin Foundation or by the Olin Corp. Anyone wishing to comment on this controversy ought first to consult Mr. Chapman’s article and, more importantly, should follow his example of sifting the facts before reaching a conclusion.

For readers of the Journal, here are the key facts:

The John M. Olin Foundation, of which I have been president for nearly 20 years, is an independent foundation whose purpose is to support individuals and institutions working to strengthen the free enterprise system. We support academic programs at the finest institutions in the nation, including the University of Chicago, Harvard, Yale, Stanford, Columbia, the University of Virginia, and many others. We do not tell scholars what to write or what to say.

The foundation was created by the personal fortune of the late John M. Olin, and is not associated with the Olin Corp. The Olin Corp. has never sought to influence our deliberations. Our trustees have never taken into account the corporate interests of the Olin Corp. or any other company when reviewing grant proposals. We are as independent of the Olin Corp. as the Ford Foundation is of the Ford Motor Co.

The John M. Olin Foundation has supported for many years a program in law and economics at the University of Chicago Law School. This program is administered and directed by a committee of faculty members in the law school. This committee, after reviewing many applications in a very competitive process, awarded a research fellowship to Mr. Lott. We at the foundation had no knowledge of who applied for these fellowships, nor did we ever suggest that Mr. Lott should be awarded one of them. We did not commission his study, nor, indeed, did we even know of it until last month, when Mr. Lott presented his findings at a conference sponsored by a Washington think tank.

As a general rule, criticism of research studies should be based on factual grounds rather than on careless and irresponsible charges about the motives of the researcher. Mr. Lott’s study should be evaluated on its own merits without imputing motives to him that do not exist. I urge Mr. Schumer to check his facts more carefully in the future.

Finally, it was incorrectly reported in the Journal (Sept. 5) that the John M. Olin Foundation is “headed by members of the family that founded the Olin Corp.” This is untrue. The trustees and officers of the foundation have been selected by virtue of their devotion to John Olin’s principles, not by virtue of family connections. Of our seven board members, only one is a member of the Olin family. None of our officers is a member of the Olin family–neither myself as president, nor our secretary-treasurer, nor our executive director.

Here is also a Chicago Tribune article by Stephen Chapman, who looked into these claims.

A Gun Study And A Conspiracy Theory

Some years ago, shortly after being hired by the Tribune, I was asked to do an article for an obscure national magazine arguing the case against federal funding of public broadcasting. After it appeared, though, the magazine’s editors got a letter from a reader exposing something shocking: The Tribune’s parent company owned several commercial TV stations, and it stood to make more money if public broadcasting were to disappear. His conclusion was that I could only be doing the bidding of my corporate masters.

Damning? Well, not quite. What the letter writer didn’t know is that I had written a similar article long before coming to the Tribune, while working for a magazine that had no broadcast investments, that I hadn’t discussed the article with anyone at the Tribune and that the newspaper itself, in blind disregard of its own interests, had editorialized consistently in favor of public broadcasting subsidies.

Conspiracy theories are easy to spin and hard to refute. But absent serious evidence, they are simply the idle conjectures of overheated minds. Showing a coincidence is not the same as proving a cause. What may look incriminating to the uninformed may in fact be perfectly irrelevant. Consider the case of John Lott.

Lott is an economist at the University of Chicago Law School who last week presented a paper in Washington based on his examination of crime rates in states that have passed laws granting ordinary people licenses to carry concealed handguns. The first comprehensive study of the subject, scheduled for publication in the prestigious Journal of Legal Studies, it reached a conclusion that did not ingratiate Lott to gun-control advocates.

The new laws, the study found, actually reduced the volume of blood running in the streets–not increased it, as feared by opponents. Lott and his co-author, graduate student David Mustard, calculated that if other states had also adopted such measures, there would have been 1,570 fewer murders, 4,177 fewer rapes and 60,000 fewer aggravated assaults in the United States each year.

Like any academic monograph, this one was open to expert criticism based on the data used, the assumptions made, the variables considered and so on. But to Lott’s surprise, the main line of attack was on something else: his scholarly integrity. According to critics, he was nothing more than a venal hireling of the gun industry, paid to prove its official line.

The argument, made at a Chicago press conference sponsored by several gun-control groups, goes like this: Lott is currently the John M. Olin Fellow at the University of Chicago Law School. Olin fellows are funded by the John M. Olin Foundation, which got its money from the Olin Corp., which owns Winchester Ammunition, which has a stake in lax gun laws.

“That’s enough to call into question the study’s legitimacy,” said Dan Kotowski, executive director of the Illinois Council Against Handgun Violence. “It’s more than a coincidence.” In the stories that followed, several news organizations highlighted the connection.

But there are some serious defects in this conspiracy theory. The first is in the facts. The Olin Foundation was created with money not from the Olin Corp. but from the personal fortune of John M. Olin upon his death. The foundation has no parent corporation and, in fact, is entirely independent. To suggest that it is merely an arm of the gun industry is like regarding the Ford Foundation as a puppet of American carmakers.

Another problem is that the foundation didn’t 1) choose Lott as a fellow, 2) give him money or 3) approve his topic. It made a grant to the law school’s law and economics program (one of many grants it makes to top universities around the country). A committee at the law school then awarded the fellowship to Lott, one of many applicants in a highly competitive process.

Even the committee had nothing to do with his choice of topics. The fellowship was to allow Lott–a prolific scholar who has published some 75 academic articles–to do research on whatever subject he chose.

His critics prefer not to think he may have actually reached his conclusion through honest investigation. Instead, they clutch at a wild hypothesis.

To accept their conspiracy theory, you have to believe the following: A company that derives a small share of its earnings from sporting ammunition somehow prevailed on an independent family foundation to funnel money to a scholar who was willing to risk his academic reputation (and, since he does not yet have tenure, his future employment) by fudging data to serve the interests of the firearms lobby–and one of the premier research universities in the world cooperated in the fraud.

For some people, that absurd fantasy is perfectly credible. But then, some people could believe that Lott was on the grassy knoll in Dallas.

For the record, the CPRC does not take any funding from the NRA or any other organization involved in the gun control debate.