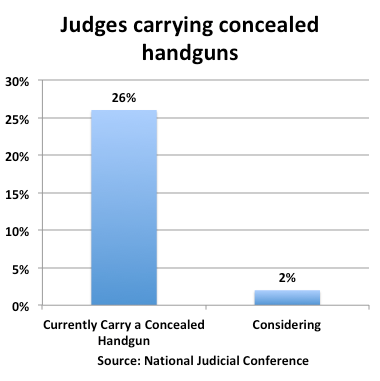 Lots of judges carry concealed handguns: 26% of Judges carry, 2% more considering, more wish they could but are banned

The National Judicial College recently surveyed judges around the country in 2017 and found that judges carry concealed handguns at much higher rates than the general population.  While a number of states still ban judges from carrying concealed handguns, the National Center for State Courts reports that Arizona, Arkansas, Georgia, Kansas, Mississippi, North Carolina, North Dakota, Oklahoma, Oregon, Rhode Island, Tennessee, and Wyoming have all changed their laws between 2011 and the beginning of 2017 to allow judges to carry.  In addition in December 2017, the Iowa state Supreme Court backed off a complete ban and gave the decision making authority to the chief judge of the judicial district.  Federal judges have the authority to determine when firearms are permitted in court facilities.  Some other states ban judges carrying.  For example, a recent attempt in the Illinois legislature in 2016 to allow judges and prosecutors to carry failed.

This is a much higher rate than the 6.5% of adults who have concealed handgun permits.

Judges have some reason to be concerned about their safety, and surely they see enough violence first hand.  Here are some cases carried by the Associated Press:

— Last year, a Florida man was sentenced to more than 300 years in prison for trying to kill federal Judge Timothy Corrigan in 2013 in what prosecutors said was an assassination attempt. The suspect faced going to prison for violating probation previously imposed by Corrigan for a 2008 firebombing attack.

— In Texas in 2015, State District Judge Julie Kocurek was wounded by a gunman in an ambush outside her Austin home. Authorities charged three men in the shooting, with federal prosecutors saying the trio believed an upcoming hearing before Kocurek would jeopardize their fraudulent financial schemes.

— In 2006 in Reno, Nevada, Family Court Judge Chuck Weller was wounded by bullet fragments and glass after a man whose contentious divorce Weller had handled shot at the judge through his courthouse office window with a high-powered rifle.