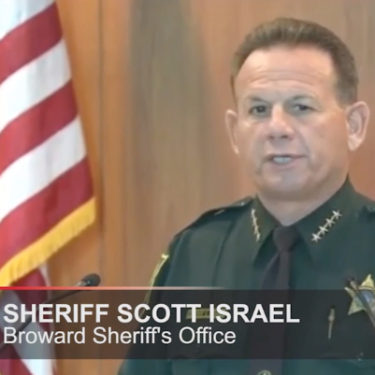 Three Sheriff’s Deputies at the Florida High School waited outside during attack, also the down side to having locked doors

Police are extremely important in stopping crime, but they usually don’t arrive on the scene while the crime is occurring.  Unfortunately, there are a couple cases where they could have been on the scene and chose not to do so.  Broward County Sheriff’s Office Deputy Scot Peterson wasn’t the only police officer who refused to enter the Stoneman Douglas High School.  Two other deputies also waited outside the school.  After all, police are only human too.

From the Ft. Lauderdale Sun Sentinel:

Instead of rushing in, several Broward sheriff’s deputies waited outside Marjory Stoneman Douglas High School while a killer gunned down schoolchildren, according to other officers on the scene.

The allegations emerged a day after another deputy, assigned to guard the school, resigned under fire, also for failing to enter the building during the shooting.

In all, at least three deputies waited outside, including School Resource Officer Scot Peterson, police sources told the Sun Sentinel. . . .

Sheriff Israel is also going to place one sheriff’s deputy armed with a rifle at each school.  Yet, even if these officers do their job, they face a very difficult task as an officer in uniform will be the first target in any attack.

Deputies will carry rifles on the grounds of local schools in Broward County in the wake of the Parkland school shooting, Broward Sheriff Scott Israel announced Wednesday.

Israel said that only deputies who are “qualified and trained” will carry the rifles on school grounds. . . .

Unfortunately, the ability to lock doors apparently also has a dark side.  People might remember that doors locked by the killer at Virginia Tech trapped people in the killing zone.  The protocol set up by Florida school officials might have been a lot less flexible during the Stoneman Douglas High School attack than it should have been.

A high school student who survived the deadly Florida shooting on Valentine’s Day that left 17 people dead has slammed his teacher on social media, calling him an “opportunist” and “a coward,” after he allegedly wouldn’t unlock his classroom door and let students in, a report from the Sun-Sentinel said on Friday.

Josh Gallagher, a junior at Marjory Stoneman Douglas High School in Parkland, Fla., shared his account on Twitter. He said he was in math class with his teacher Jim Gard when the fire alarm went off. Students began to evacuate, and while Gallagher was near the stairwell, he said they heard shots being fired.

Kids started to retreat back toward their classroom, Gallagher said, only to find a locked door. . . .