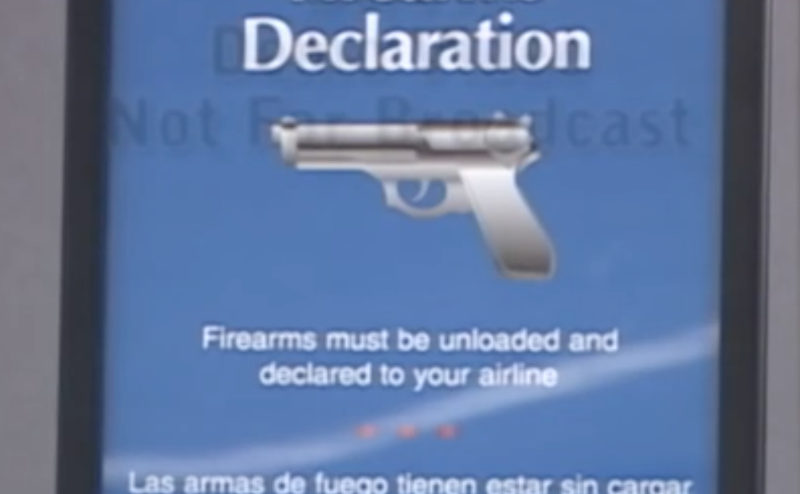 “Gun seizures at U.S. airports on record-setting pace,” but 97% of the change explained by increase in permits, Washington Post mentions on our research

Fred Kunkle at the Washington Post has a story about the record number of seizures of guns at airports and is calling for stiffer penalties.

. . . The increase in gun seizures is no doubt a reflection of record numbers of air travelers and the rising number of Americans who have permits to carry concealed weapons.

More than 16.3 million people have obtained permits to carry concealed firearms, up from an estimated 14.5 million just a year earlier, according to  estimates by the Crime Prevention Research Center. . . .

But the number of firearms that show up at TSA checkpoints also reflects nothing less than carelessness on the part of gun owners — and, arguably, insufficiently serious consequences for everybody who “forgets” he or she is walking around with a deadly weapon.

At an annual rate, the US is on track to have 3,722 firearms found in carry-on bags at airport checkpoints, a 9.8 percent increase over the previous year.  That is actually a little slower than the 12.4 percent increase in the number of concealed handgun permits, and that this doesn’t count that there are three more states this year that no longer permits to carry concealed in their states (eight states since July 2015).

To get an idea of how small this rate of firearms violations is, note that we are talking about 1 firearm found in carry-on bags for every 232,190 passengers in 2015 (616 million divided by 2,653 seizures).  To get a more precise measure of the error rate, it would be useful to know how many times the average permit holder flys and how many people carry in the 14 states that no longer require permits to legally carry in all or almost all their state.  However, a new Pew Research Poll suggests that 5.4% of adults carry most or all the time.  We then might make a very, very rough educated guess about the rate that people who are legally carrying guns get into trouble.  If the average permit holder flys as much as the average adult (this might be low) and say 95% of those who fly are adults, that implies about 31.6 million flights by permit holders and thus about 1 mistake for every 8,500 flights by people who can legally carry guns.

More importantly, as far as we can tell, none of these individuals was described as representing a danger to others.

The very simple regression estimates below show two things: 1) that just by itself the growth in concealed handgun permits explains about 97% of the change in gun seizures at airports (see the R-squared values) and 2) if you include a time trend in the regression, permit holders are actually becoming more careful (that the number of seizures is actually significantly declining after the number of permits has been accounted for). 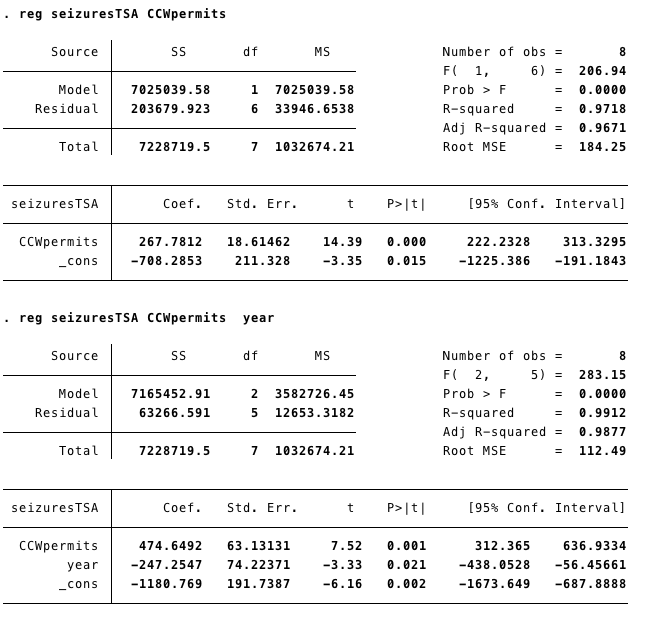 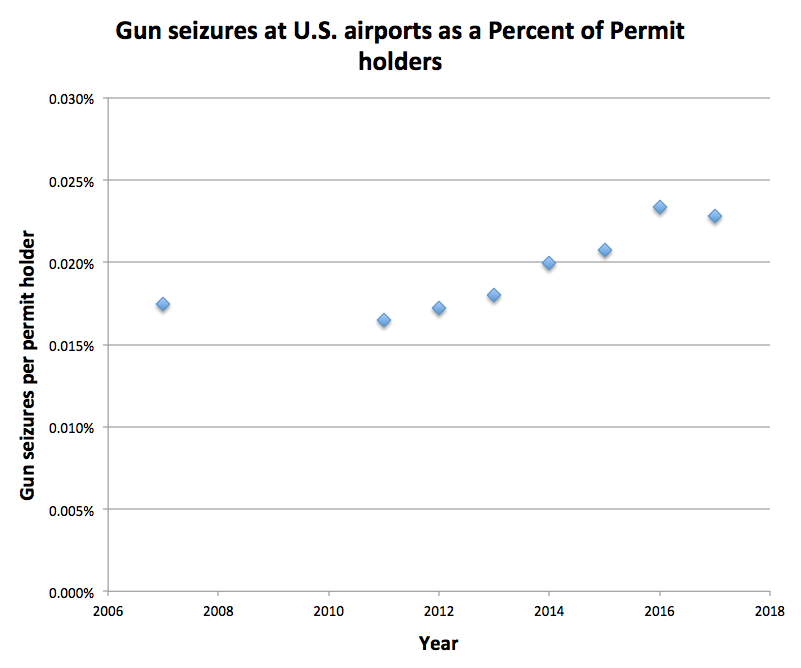