One of the big questions about concealed carry is how frequently permit holders carry their guns.  At least 6.5% of the adult population has a concealed handgun permit, but with 14 states allowing people to carry without a permit, it is hard to know how many people actually carry.  But a new Pew Research Center Survey makes it possible to estimate the percentage of the adult population in the US carries guns with them and how frequently they carry them, though their number would include both concealed and open carry.  No permits are necessary for open carry in most states.  A lot of people may not frequently openly carry handguns, but it might make up a large share of those who on occasion carry a gun.  Surprisingly no one has done the necessary multiplication to figure this number out.  There are three relevant sets of numbers:

First two warnings.  While presumably, most people who are illegally carrying a gun aren’t likely to tell a stranger that they are breaking the law, some of these people might be illegally carrying.  On the other hand, there is a lot of evidence that many people with guns don’t like to tell pollsters that they have them so that would work to make these percentages lower than they actually are for law-abiding individuals.  It is not clear what the net effect of these two opposing factors are, but if we had to guess, it most likely underestimates the number of people who are legally carrying a gun.

There are three relevant sets of numbers:

— 30% of American adults say that they own a gun

Assuming 242.9 million adults, what does that imply? 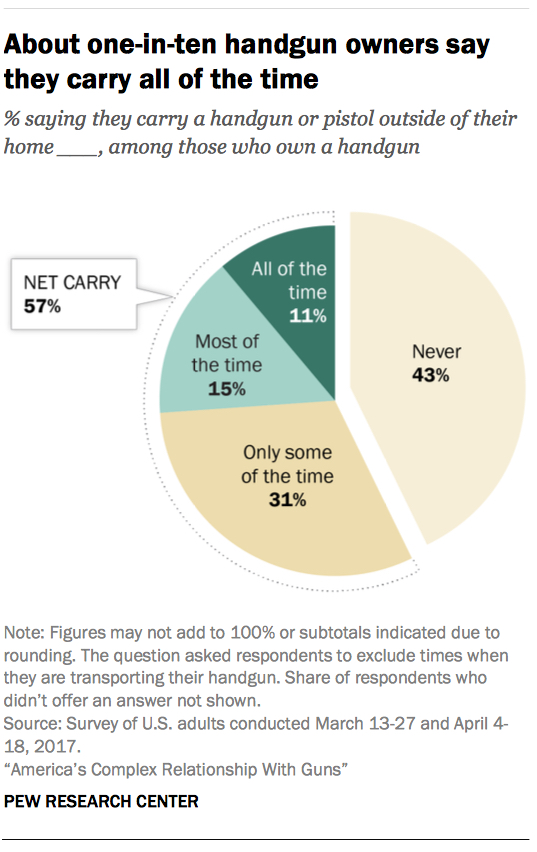