Dr. John Lott has a new piece up at Fox News on the Trump administration’s decision to overturn Obama’s ban on used military equipment being given to police.  The piece starts this way:

Police have a tough and dangerous job.  Armored military vehicles and military-grade body armor aren’t just useful for soldiers, they make it possible for police to protect Americans.

During his address Monday to the annual meeting of the Fraternal Order of Police, the nation’s largest police union with 330,000 members, Attorney General Jeff Sessions announced that President Trump is overturning Obama’s ban on supplying surplus military equipment to police.

It is an issue that the Fraternal Order of Police and other police organizations cared about deeply during the campaign last year.  Indeed, they based their endorsement of Trump during the election on his promise to overturn this ban.

Obama first ordered a review of the Clinton-era program after heavily armored police confronted rioters in August 2014 in Ferguson, Missouri. Obama worried that the armored vehicles and heavily-armored police only exacerbated tensions and led to more violence, but Obama never seemed to understand that with rocks, bottles, and tent poles being thrown at the police — and even bullets being fired at them — the police couldn’t have stood between the protestors and those who they were protecting without this gear.  And that without the police, the violence would have been much worse.

If there are any doubts what would have happened without such protection, just remember how much worse the riots were when Governor Nixon (D-Missouri) temporarily kept the police and national guard out of Ferguson.  As one newspaper wrote: “A show of force by police and the U.S. National Guard in Ferguson, Missouri, prevented a second night of widespread rioting by early on Wednesday.”  Nixon might have been well motivated by the fear that police would only antagonize the rioters, but his decision meant that the demonstrators ran wild, destroying businesses and harming people.

With businesses destroyed and leaving the area, it is the loss of jobs and higher prices that leave long-term scars on minority communities such as Ferguson.

The vast majority of the military surplus equipment provided the police is purely defensive.  Still, even the more extreme sounding weapons, such as flashbang grenades and sniper rifles, have important uses.  Some police departments face well-armed and vicious drug gangs.  Flashbang grenades may be the safest option to immobilize criminals before police enter a room.  Sniper rifles might be necessary to save innocent lives when hostage situations exist. . . . 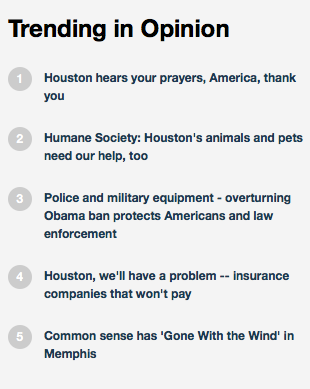