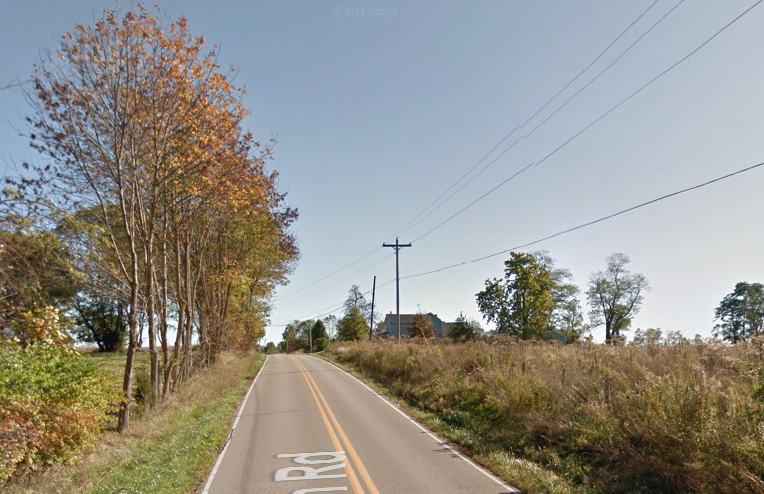 Indiana State Police say a Moores Hill man was killed by a person who witnessed the man fighting with an officer.

The incident occurred around 12:30 p.m. Monday in the 8300 block of State Road 56, west of Rising Sun. Officers were called to the scene on a report of a suspicious person.

A conservation officer made contact with a man, identified as Justin Holland, 25, who was near a vehicle along State Road 56.

During their interaction, police say Holland began to resist the officer and started a fight.

A woman at a nearby home came to assist the officer, who was reportedly being overtaken by Holland. The woman fired a single shot from her personal firearm, hitting Holland in the torso. . . .

Updated information on this case is available here.

No charges will be filed against a woman who fatally shot a man attacking an Indiana Conservation Officer, the Dearborn-Ohio County Prosecutors Office announced Wednesday.. . .

The shooting – which made many headlines – transpired on February 20 on State Road 56 in Ohio County. Just after noon that day, a resident called 911 to report “a very disheveled” young male in a pickup truck parked partially in the caller’s driveway and in a lane on the highway.

Chris Powell had just gotten off duty at noon, but was still in his marked police vehicle. He heard the dispatch and drove to the scene.

Once he arrived, according to the prosecutor, he made contact with the male, later identified as 25-year-old Justin Holland. He was digging through his truck and Powell asked him to step to the rear of the truck. It became apparent to Powell that Holland may be impaired and attempted to place handcuffs on him. As Powell attempted to place the cuffs on Holland, a struggle ensued along the roadway.

The prosecutor said Powell felt pressure on his gun holster from Holland, then heard a gunshot.

The shot had come from a neighbor who, according to Deddens, feared for the officer’s safety and came to his aid.

The single shot struck Holland in the upper shoulder. Holland was initially administered first aid by the 911 caller and the shooter. He would later be pronounced dead at Dearborn County Hospital. . . .

Despite the circumstances of the incident, Holland’s family filed a wrongful death lawsuit against Jaehnen, Officer Powell, and the DNR on Feb. 15.

“It is tragic how one person’s irrational and unlawful actions can destroy the peaceful lives of others,” Sgt. Halbig, who is also the President of the Laughery Valley Fraternal Order of Police (FOP), said on a fundraising page he has initiated to help Jaehnen with legal expenses.

“The FOP is an organization that supports solid laws and is essentially all about the fellowship of law enforcement officers, but we also have an obligation to recognize Kystie’s heroic and selfless actions while helping out one of our own,” he told Blue Lives Matter.

Although Officer Powell and the DNR have also been named in the suit, they have access to aid and defense teams that Jaehnen does not.

“Kystie is courageous, and her actions saved a life, and she should be commended, but instead she is being sued,” Sgt. Halbig noted on the fundraising page. “Attorney fees are an expense well beyond Kystie’s income and this will not be a quick process. The legal fees and emotional stress may drain every resource she has.” . . . 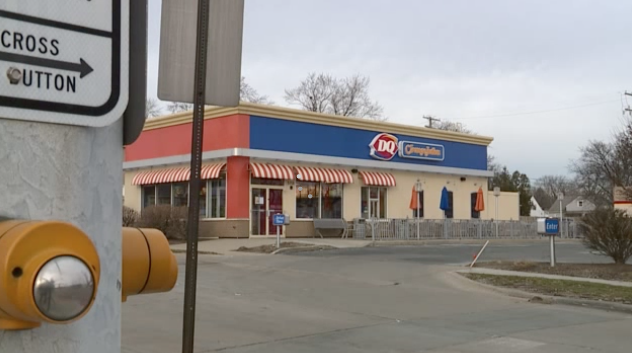 An employee of a Dairy Queen in Mayfield Heights shot a would-be armed robber Sunday evening.

Police report that the suspect came into the store at 5713 Mayfield Road at 10:20 p.m. and pointed a gun at employees. That was when the employee, who had a CCW permit, shot the suspect once. . . . 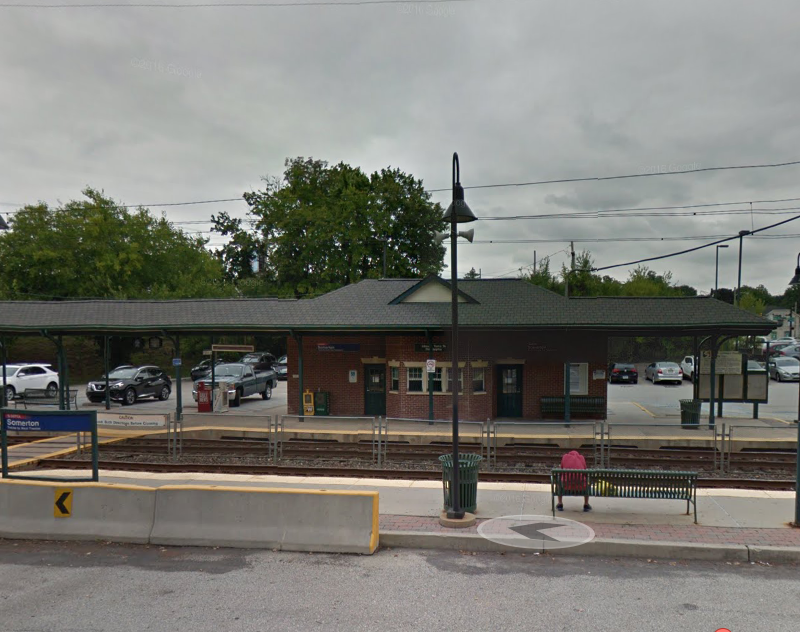 The second driver shot the first, a 52-year-old man, in the stomach, head and neck. 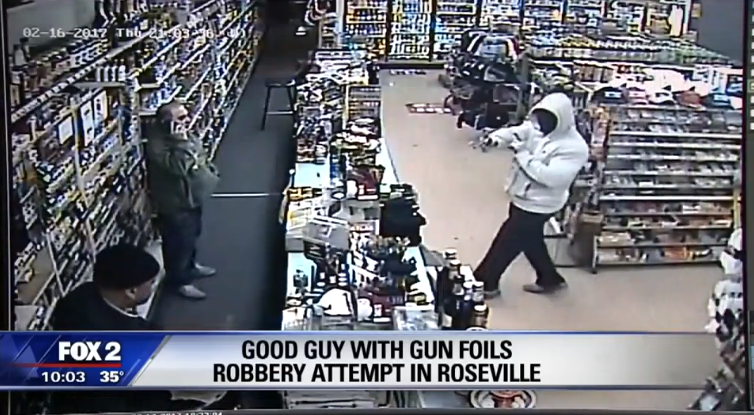 . . . Two crooks came in covering their faces, one of them pointing a gun. One of them hopped on the counter when suddenly, he was confronted by someone else with a gun.

A customer was also armed and he started shooting. The masked men took off and police believe one of them may have been hit. . . .

Police say the customer had a license to carry a gun and will not face any charges. The suspects are not in custody. . . . 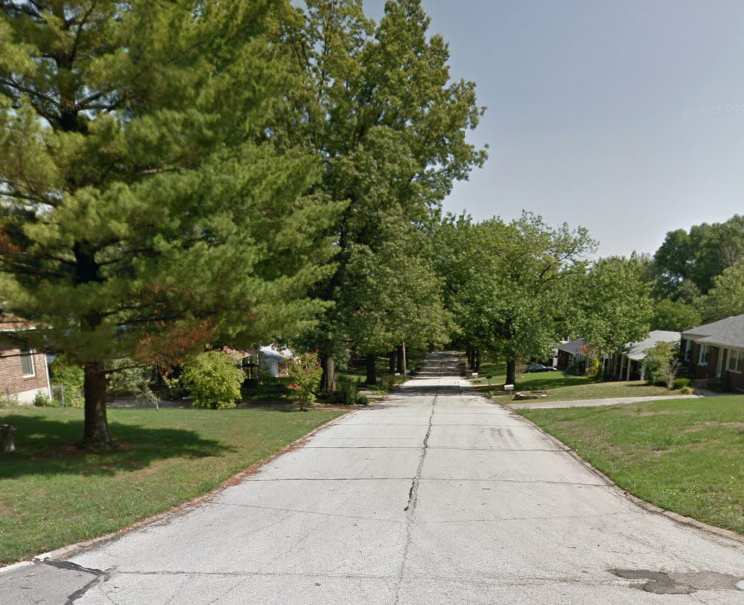 A Ferguson man was charged after an attempted robbery here early Thursday was thwarted when the would-be victim’s neighbor pulled out a gun and shot him.

St. Louis County Police say Tre’von Johnson, 24, attempted to a rob a man in the 1700 block of Bradshaw Drive shortly before 2 a.m.

A neighbor saw Johnson pull out a handgun, point it at his would-be victim and demand money, police said. The neighbor pulled out his handgun and shot Johnson multiple times.

Johnson got in his car and fled, police said. Officers later found his car with bullet damage. . . .

Redding police continued to investigate Thursday the shooting death of a man a day earlier that so far appears to be a self-defense case, detectives said. . . .

Initial dispatch calls at 9:13 p.m. Wednesday said the shooting was possibly related to road rage, though DiMatteo said that wasn’t the case. Michael Lake, 27, stopped at a red light when the man approached his vehicle while riding a bicycle.

It’s unknown why the two began fighting but the altercation ended with Lake shooting and killing the man, police said. . . .

Lake has a concealed weapons permit and provided police with a statement before they allowed him to leave, officers said.

“Considering the fact he was never handcuffed, frisked or anything else, it’s pretty clear this was a self-defense issue,” Kucera said. “And he’s taking it pretty hard.” . . .