UPDATED: France had more casualties from mass public shootings in 2015 than the US suffered during Obama’s entire presidency (532 to 527) 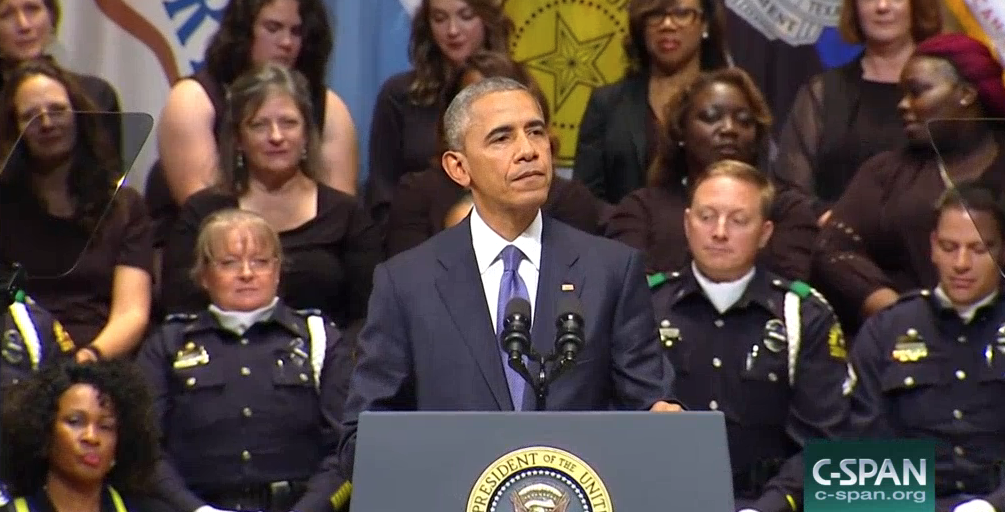 “With respect to Planned Parenthood, obviously, my heart goes out to the families of those impacted. … I say this every time we’ve got one of these mass shootings: This just doesn’t happen in other countries.” –Obama, news conference at COP21 climate conference in Paris, Dec. 1, 2015

“We are the only advanced country on Earth that sees these kinds of mass shootings every few months.” –Obama, statement on shootings at Umpqua Community College, Roseburg, Ore., Oct. 1, 2015

“You don’t see murder on this kind of scale, with this kind of frequency, in any other advanced nation on Earth.” –Obama, speech at U.S. Conference of Mayors, June 19, 2015

“At some point, we as a country will have to reckon with the fact that this type of mass violence does not happen in other advanced countries. It doesn’t happen in other places with this kind of frequency. And it is in our power to do something about it.” –Obama, statement on the shooting in Charleston, S.C., June 18, 2015

“But we are the only advanced country on Earth that sees this kind of mass violence erupt with this kind of frequency. It doesn’t happen in other advanced countries. It’s not even close. And as I’ve said before, somehow we’ve become numb to it and we start thinking that this is normal.” –President Obama, announcing his new executive orders on guns, January 7, 2016

“The one thing we do know is that we have a pattern now of mass shootings in this country that has no parallel anywhere else in the world.  And there’s some steps we could take, not to eliminate every one of these mass shootings, but to improve the odds that they don’t happen as frequently.” –President Obama, interview that aired on CBS Evening News, Dec. 2, 2015

“We kill each other in these mass shootings at rates that are exponentially higher than anyplace else. Well, what’s the difference? The difference is that these guys can stack up a bunch of ammunition in their houses.” –President Obama, during Q&A with David Karp, CEO Tumblr, June 10, 2014

Yet, despite the impression that President Obama has been creating, France suffered more casualties (murders and injuries) from mass public shootings in 2015 than the US has suffered during Obama’s entire presidency (Updated 532 to 527 in Tables below).  Note that these numbers don’t adjust for the fact that the US has 5 times the population of France.  The per capita rate of casualties in France is thus 8.19 per million and for the US it is 1.65 — France’s per capita rate of casualties is thus 4.97 times higher than the rate in the US.

UPDATE: February 4, 2016.  If only by excellent police work and some luck, last November Paris was literally just three days away from several more mass public shootings planned for a nursery school, a shopping mall, and a police station.

UPDATE: Of course, there have been many terrorist attacks that have harmed a lot of people that didn’t involve just guns.

July 14, 2016: 86 people were killed and another 434 injured after a truck slammed into a crowd celebrating Bastille Day in the southern French city of Nice.  The attacker here was also shooting people but none of the breakdowns of casualties breaks out deaths from the truck with deaths from being shot.

December 22, 2014: 10 people were seriously injured when a van drove into pedestrians at a Christmas market in Nantes, France, in the western part of the country. 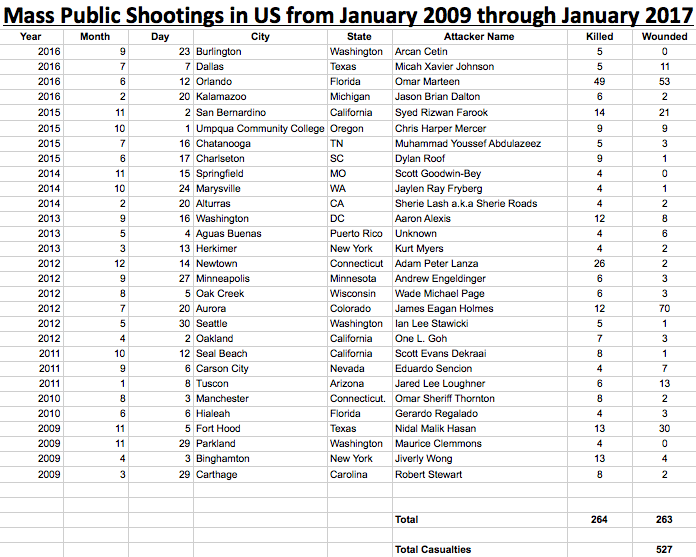