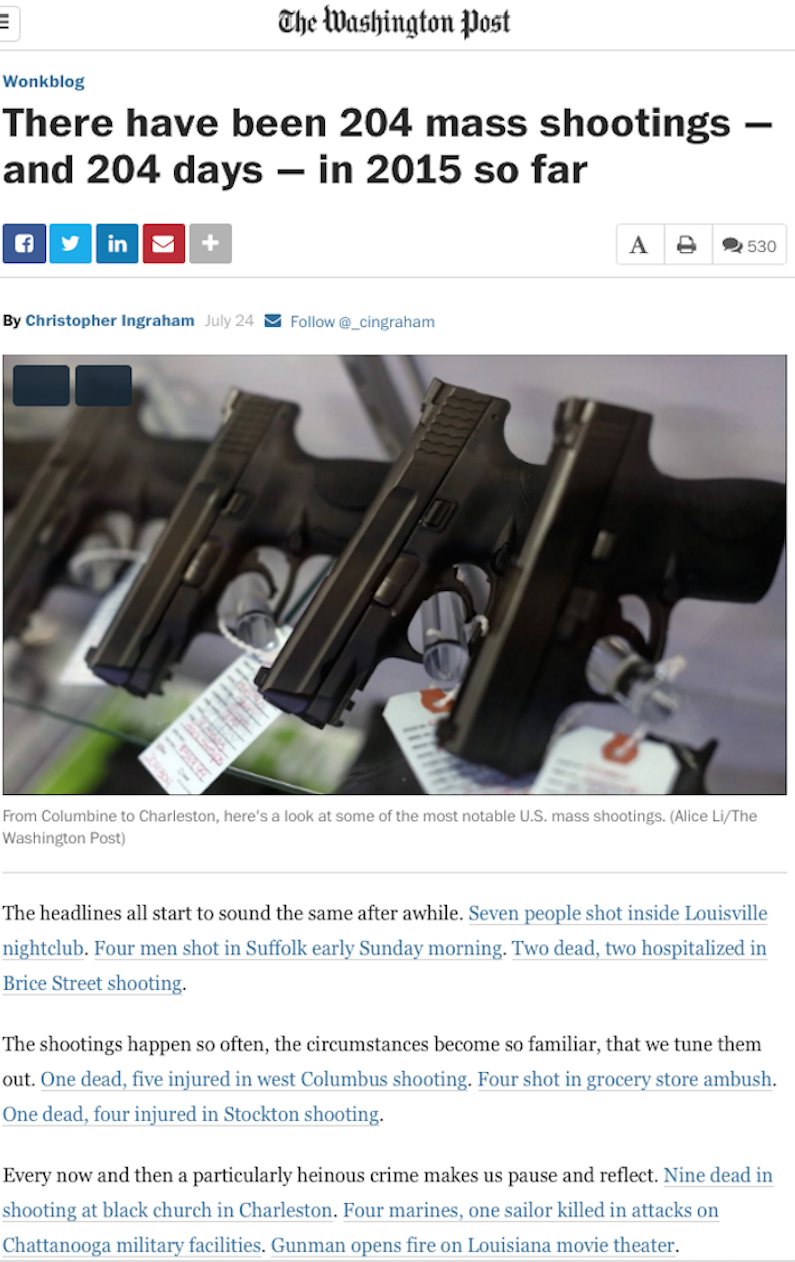 Christopher Ingraham at the Washington Post has another article on guns.   Unfortunately, Ingraham explicitly ignores the FBI’s definition on mass shootings.  The cases he ends up with involve very few murders and are heavily biased to include gang and other criminal activity.  Curbing gang violence is important, and it could be done pretty simply: stop enforcing the laws or legalize drugs.  Absent legalization or demand disappearing, drug gangs will still fight to control turf.  Whether drugs should legalized is another topic.  The point here is simply to blame drug gang fights on gun laws is wrong.  Just as drug gangs can get a hold of illegal drugs, they can get a hold of the weapons that they use to protect that valuable property.  The key is that the causes and solutions to drug gang violence are dramatically different than for the vast majority of mass public shootings, where attacks are designed to kill or wound as many people as possible.  Padding the numbers by lumping the two together doesn’t make much sense.

After 2012, mass killings were defined by statute by the federal government as “three or more killed in a single incident.”  The definition used to be four or more killed.  Ingraham’s examples surely invoke not just “mass shootings,” but “mass public shootings,” as he notes: “From Columbine to Charleston, here’s a look at some of the most notable U.S. mass shootings” or “Nine dead in shooting at black church in Charleston. Four marines, one sailor killed in attacks on Chattanooga military facilities. Gunman opens fire on Louisiana movie theater.”  Thus while Ingraham’s discussion largely focuses on traditional mass public shootings, he never honestly tells readers that these “mass public shooting” cases are a very, very tiny selection of the cases that he points to.

The source that Ingraham points to hides this simple fact.  Virtually none of the links that he points to mention anything about gangs being involved in the crime.  An analysis that focuses on non-gang fights and shows how little shootings with multiple murders over many years is available here.

There are a couple of other crucial parts to the FBI definition that Ingraham ignores.  The FBI excludes “shootings that resulted from gang or drug violence” or are part of some other crime.  The FBI also defines “public” places as “includ[ing] commercial areas (divided into malls, businesses open to pedestrian traffic, and businesses closed to pedestrian traffic), educational environments (divided into schools [pre-kindergarten through 12th grade] and IHEs), open spaces, government proper- ties (divided into military and other government properties), residences, houses of worship, and health care facilities.”   (Comments on that particular FBI report, which itself has many errors, is available here.)

So what Ingraham is left with is a lot of shootings where people aren’t killed, criminal gangs are involved, and cases take place out of public view.  But what if we focus on the cases that people are most concerned about, in the way the government defines them?

Nine of the 17 cases involve 3 or more people killed.  Just 3 of those 9 where non-gang cases that don’t involve some other criminal act, those cases had a total of 17 deaths and 3 woundings.  If you want to graphically see how many of these cases involve gangs or other crimes, click on screen shot below to enlarge and view the cases.

These claims are meant to imply mass shootings are more frequent this year, but if you compare apples to apples (non-gang attacks where multiple people are killed), 2015 is not turning out an unusual year.  If Ingraham wants to claim that gang shootings are increasing, he should provide evidence of that.

Of course, all this ignores question of whether gun control regulations, such as gun-free zones, primarily disarm law-abiding citizens and make them sitting ducks for criminals.  The simple notion from Ingraham in the past has been to impose strict gun regulations, but what what this post and others ignore is that these regulations can make crime easier.

Addition:  Yet, even if you want to include all these gang and other crime related events, the rate of attacks has actually been falling (see the discussion by Grant Duwe available here).

I thank Roger Lott for taking the time to go through these cases.

UPDATE: Christopher Ingraham at the Washington Post has this response on Monday, July 27th:

This has caused the Tracker to come in for some criticism from some quarters. It counts “a lot of shootings where people aren’t killed, criminal gangs are involved, and cases take place out of public view,” according to a recent blog post by John Lott, an independent researcher and Fox News columnist who is generally opposed to stricter gun regulations. He’d prefer to “focus on the cases that people are most concerned about, in the way the government defines them.”

But there’s an implicit assumption here that only some types of gun violence really deserve such attention or policy focus — that we should only closely look at it when gunshots ring out in say, suburban schools and movie theaters, rather than on urban streets.

Lott argues that gang members killing each other over turf are motivated by different reasons than disturbed individuals who decide to shoot up theaters. But the outcomes — people dead, people wounded — are the same. And if we want to understand the full extent of gratuitous gun violence in this country, it makes sense to consider the full range of examples of gun violence. It’s worth pointing out that the Lafayette theater shooting doesn’t even meet the federal definition of a mass killing, which requires three or more victims to die at the hand of a gunman. . . .

At least there is no argument about the obvious, that the cases in Ingraham’s sample overwhelmingly involve gangs (as he notes, their definition “allows [their data] to incorporate more of the garden variety gun violence that happens due to gang and other criminal activity, particularly in urban areas”).  The problem here isn’t just that “gang members killing each other over turf are motivated by different reasons than disturbed individuals who decide to shoot up theaters,” but that 1) it is particularly difficult to stop drug gang members from getting weapons and 2) that  Ingraham’s piece invoked the “mass public shooting” examples that get people’s attention and never gave his readers an idea that the vast majority of his cases were not remotely similar to those cases.  They weren’t similar because most of his cases didn’t involve anyone getting killed and he never let readers know how many of his cases involve drug gangs.

← CPRC on the Laura Ingraham Show: The Danger of Gun-free Zones Permit holder saves family of 4 that man was shooting at →