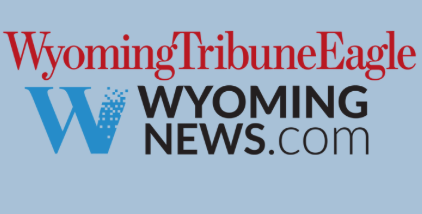 With the debate over gun-free zones heating up in the Wyoming legislature, Dr. John Lott has a piece in the Capitol city’s newspaper, the Tribune Eagle.  Lott was responding to a piece in the paper by Kerry Drake that had attacked Lott and the research from the CPRC.

Strangely, after the piece went up, Dr. Lott tried to respond to some of the comments on the newspaper’s webpage, but all the responses that he put up were taken down after about an hour (see the screen shots provided below).  There were other weird things with dealing with this paper.  While one would think that a Wyoming newspaper would be conservative, I had to spend an inordinate amount of time with the newspaper’s editor responding to claims by left wing outlets Mother Jones and Media Matters.  [UPDATE: After complaining about this, two of my four comments have been put back up.  The claim was that all my comments had been removed because they were considered SPAM.]

Would you post a sign in front of your home announcing that you live in a gun-free zone? Would this make you feel safer?

To criminals, gun-free zones just look like easy targets. But in a recent column for the Wyoming Tribune Eagle, Kerry Drake argues that killers pay no attention to gun-free zones. He accuses me of “falsehoods,” “lies,” “half-truths,” and, again, “lies.”

But consider the fact that since 1950, more than 98 percent of public mass shootings in America have taken place where general citizens are banned from carrying guns. In Europe, every mass public shooting in history has occurred in a gun-free zone. And Europe is no stranger to mass public shootings. In the past eight years, it has experienced a per-capita casualty rate 50 percent higher than that of the U.S.

With permit holders preventing dozens of mass public shootings in recent years, it is unsurprising that killers try to avoid resistance.

Last year, a young Islamic State sympathizer planned a shooting at one of the largest churches in Detroit. A FBI wiretap recorded his reasons for picking the church: “It’s easy, and a lot of people go there. Plus people are not allowed to carry guns in church. Plus it would make the news.”

These killers might be crazy, but they aren’t stupid. Picking defenseless targets means being able to kill more people. A long list of killers has explicitly stated this reasoning, including the 2015 Charleston, South Carolina, church shooting, the 2012 theater shooting in Aurora, Colorado, and the 2015 attack in San Bernardino, California.

In March 2013, 86 percent of police officers surveyed by PoliceOne, the 450,000-member private organization of police, said that casualties would have been prevented if legally armed citizens had been able to carry guns in places such as Newtown and Aurora.

Drake ignores these simple facts. He resorts to personal attacks and questions my objectivity by suggesting that I was paid to testify before the Wyoming Senate two years ago. I was invited by state Sen. Curt Meier, R-LaGrange. The Wyoming Gun Owners didn’t pay for me to testify.

Contrary to what Drake writes, I never claimed that armed civilians had helped stop 39 different incidents. Since 2012, civilians have stopped 18 mass public shootings and a couple of stabbing attacks. Other incidents were stopped by off-duty police officers, but I didn’t reference those cases in my testimony. In my writings, I have made a clear distinction between cases involving off-duty officers and those involving civilians.

Conyers, Georgia, May 31, 2015: A permit holder returned fire after a shooter killed two people at a convenience store. The attacker retreated from the store. Rockdale County Sheriff Eric Levett said of the incident: “I believe that if Mr. Scott did not return fire at the suspect, then more of those customers would have (been) hit by a gun(shot). … So, in my opinion, he saved other lives in that store.”

Chicago, Illinois, April 2015: An Uber driver had just dropped off a passenger when he saw gunman Everardo Custodio open fire on a crowd of people. The driver, who had a permit, shot and wounded the gunman. Assistant state’s attorney Barry Quinn praised the driver for “acting in self-defense and in the defense of others.”

Philadelphia, Pennsylvania, March 2015: A permit holder was walking by a barbershop when he heard shots fired. He quickly ran into the shop and shot the gunman to death. “I guess he saved a lot of people in there,” said Police Captain Frank Llewellyn.

Drake cites a study which found that, “From 1966 to 2015, just 12 percent of the 111 mass shootings with high numbers of fatalities happened in gun-free zones.” But this wasn’t a Johns Hopkins study, as Drake claims. And the author of the report, Louis Klarevas, wrote: “In all fairness to Lott, when he conducted his study, he employed a different definition of mass shootings.” I had used the FBI definition of mass public shootings, which excludes “shootings that resulted from gang or drug violence” or that were committed as part of some other crime.

Gun-free zones are magnets for murderers. Even the most ardent gun-control advocate – presumably even Drake – would never put “Gun-Free Zone” signs on his home. Let’s stop putting them elsewhere. 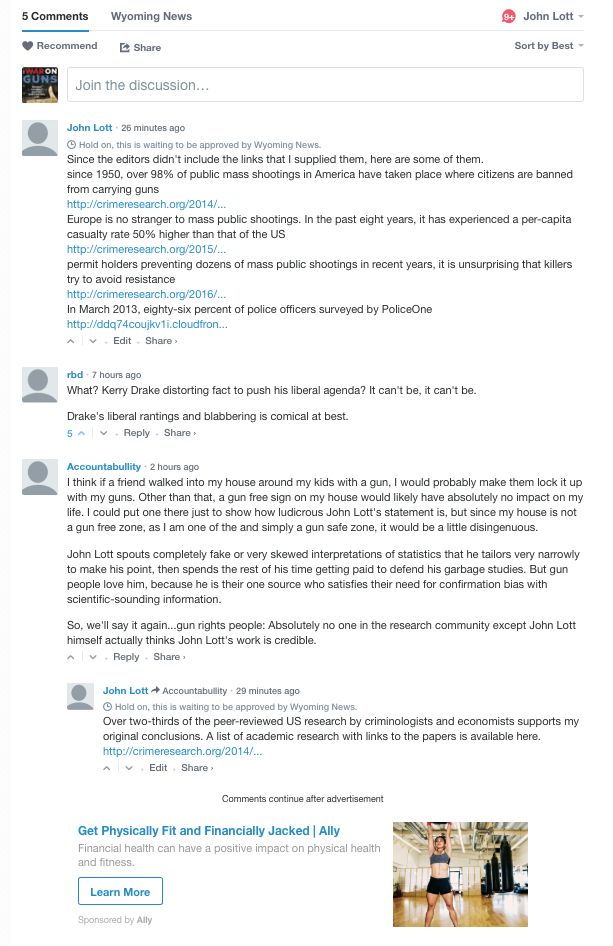 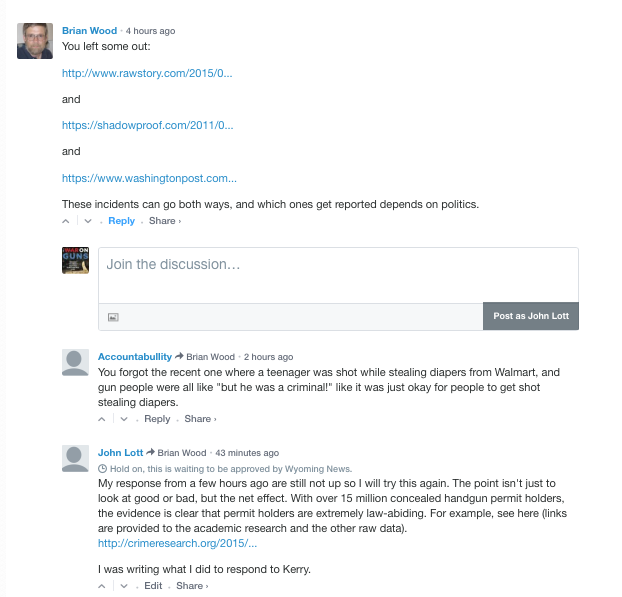 After about 8 hours, this is all that remained. 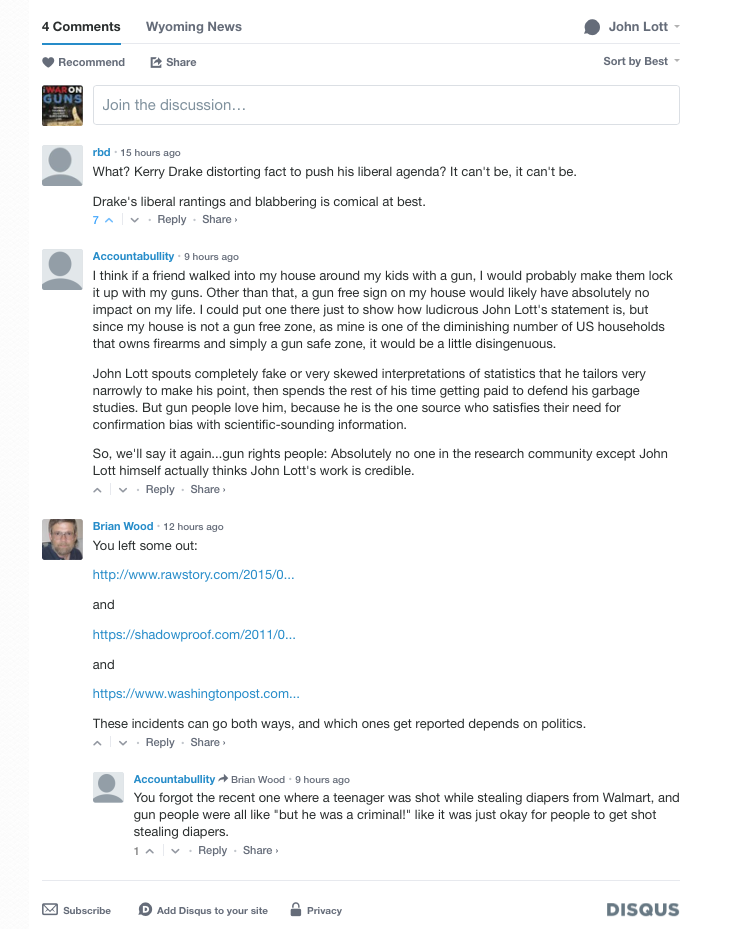