After this year, there will likely be 16 or 17 States that allow people to carry concealed handguns without a permit: Constitutional Carry

With Missouri, West Virginia, and Idaho enacting Constitutional Carry laws last year, twelve states allow people to carry without a permit in all or virtually all their states.  This includes Montana that allows people to carry without a permit in about 99.4% of the state.    And 2017 is shaping up as a banner year for passing more of these laws.  States that are about to pass these laws include Indiana, Kentucky, New Hampshire, North Dakota, and South Dakota.  Tennessee is considering allowing “open carry” without a permit, though that is already quite common in most states.  In Iowa, there is substantial support change to their state Constitution that would prohibit “mandatory licensing,” though it isn’t completely clear how broad that restriction would be and it might prohibit state concealed carry licensing.  Other states that are considering this legislation, but are unlikely to pass Constitutional Carry, include: Colorado (won’t pass legislature and would be vetoed by governor), Minnesota (Governor would veto), Texas (unlikely to get out of the state legislature), and Utah (Governor would likely veto again).

It is difficult to evaluate the impact that these Constitutional Carry laws have on crime rates simply because few states have had these laws in effect for many years.  In the case of Vermont, they have always allowed carrying without a permit, so there is no before and after data to evaluate the impact of this policy.

Only three states have allowed concealed carry without a permit in their states and have done so early enough so that we have accidental death data for at least five years after the law was enacted (Alaska, Arizona, and Montana).  For two of the states (Alaska and Montana), the effective date of their laws was in September.  For Arizona, the effective date was July 1st.  So year zero, the year that the laws went into effect, the laws are in effect for less than a quarter of the year for Alaska and Montana.  Thus any changes that occur during the effective year for those two states are hard to blame on the enactment of the laws.

There is another problem with this data, starting in 2008 the CDC stopped reporting accidental deaths when fewer than 9 occurred in a state in a particular year.  Thus no data was available for Arizona for 2011 through 2015, though we know that at most 9 people died in any given year.  Thus the values for Arizona for years 1 to 4 are maximum values for the rate that accidental gun deaths occur.

The bottom line is for this small sample of states it is very hard to see any bad effect of these laws. For Arizona, there is not a year after the law is enacted where the share of accidental gun deaths is as high as it was in the three years before the law or the year of enactment.  In Alaska, there is only one year where the share is relatively high. 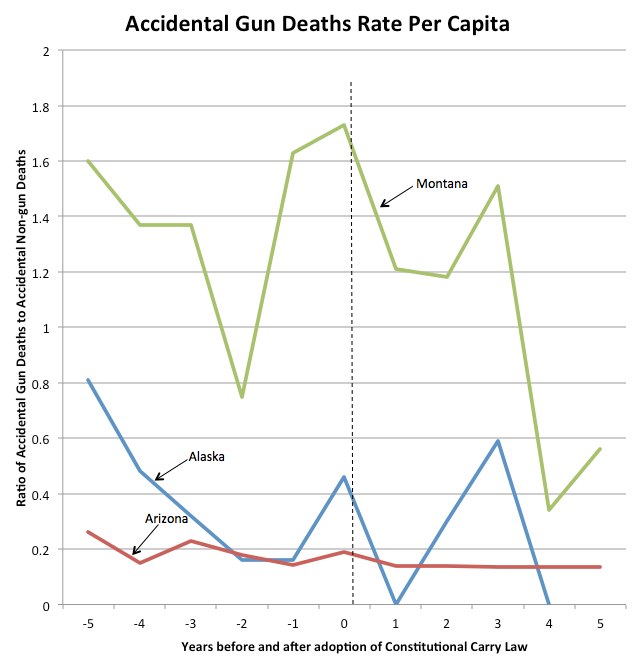 UPDATE: South Dakota’s governor, Dennis Daugaard, has announced that he opposes the push for Constitutional Carry in his state.

UPDATE: There is an argument to be made that Pennsylvania and Indiana, with an exemption for those who are being stalked or threatened, would be the ideal concealed handgun law. This would mean a permit with a very low fee and no training requirement. It would be easier to defend in the long run because with the permits you show how law-abiding the permit holders are.

← CPRC on the Michael Dukes Show in Anchorage on the errors in a new Violence Policy Center report on firearm death rates and the Ft Lauderdale Airport Shooting CPRC in the Associated Press: "packing guns on statehouse grounds" →