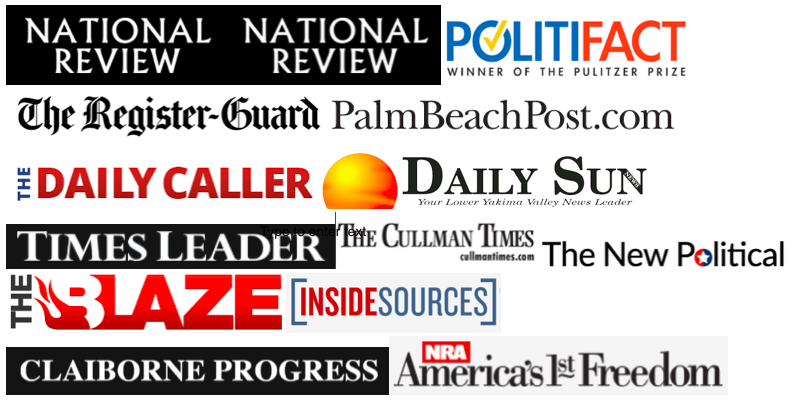 A lot of news coverage for the CPRC

Over at the Crime Research Prevention Center, John Lott Jr. notes that the number of “constitutional carry” states will reach 16 or 17 by the end of this year. Given that 15 years ago there was only one (two if you count Montana, which I’d classify as a “mostly constitutional carry” state) — and that 30 years ago most states had extremely restrictive permitting processes to boot — this is nothing short of remarkable. Elections, as it is said, have consequences.

Lott writes: [They then have a very long extended quote from one of our posts] . . .

Moreover, the evidence is simply overwhelming that holders of concealed-carry permits are extraordinarily law-abiding — perhaps even more law-abiding than the police. According to the Crime Prevention Research Center, police commit crimes at a rate of roughly 124 crimes per 100,000 officers. That’s an extraordinarily low rate (the general public’s crime rate is 31 times greater). In Florida, by contrast, concealed-carry permit holders committed misdemeanors or felonies at a rate of 12.5 per 100,000. In Texas, the rate was 20.5 per 100,000. In other words, “armed” does not equal “dangerous” when a person carries lawfully, with a permit. Lawful gun owners are not a threat to the public or to the police. . . .

John Lott, president of the pro-gun Crime Prevention Research Center, said federal legislation has pre-empted state rules before, meaning there is plenty of precedent for rules to be passed federally. That being said, Congress hasn’t introduced any bills.

“None of the bills so far being offered by Republicans on reciprocity currently propose changes in federal law to override state rules on where one can carry a permit,” Lott said. “Yet, it is surely possible for those bills to be changed.” . . .

In 2008, the U.S. General Accountability Office estimated 8 million Americans had concealed carry permits. Based on increases reported in Oregon and some other states, that number has climbed. The Crime Prevention Research Center, whose claims must be considered in light of its aim to correlate gun ownership with crime reduction, reported 11.1 million permits in 2014, up from 2.7 million in 1999. . . .

In a 2013 analysis by John Lott, the president of the Crime Prevention Research Center, he found of all the public shootings in the United States between 1950 and 2012 in which four or more people were killed, all but two occurred in gun-free areas. . . .

A very recent report from the Crime Prevention Research Center (CPRC) reveals that from the 1950s through July 10, 2016, 98.4 percent of mass shootings have occurred in gun-free zones.

#That’s a startling statistic. Perhaps we should be addressing the ever-increasing desire to create more and more gun-free zones as they have proven to be dangerously ineffective.

#Another report by the CPRC reveals that in our state (between 2005 and 2014) the growth rate for women getting CPLs was twice as fast as that of men.

#And those with CPLs are convicted of crimes at a rate one-seventh that of law enforcement.

#The bottom line is this: if you want to change a law – fine.

#But do it legally. Do it in a way that is public, out in the open and where duly-elected officials can be held accountable for their vote. . . .

A recent report by the Crime Prevention Research Center shows the 25 states with the highest rates of concealed carry permit owners experienced significantly lower rates of murder and violent crime.

“The type of person that would go through the process, one in which you can often lose the license for fairly trivial offenses,” said Crime Prevention Research Center President John Lott. “They are reluctant to use the the guns in a wrong way because they have a lot to lose if they do something wrong.” . . . .

On the heels of the shooting in Fort Lauderdale that took the lives of five people, a new report has surfaced with some breathtaking statistics about where mass shootings take place.

According to the Crime Prevention Research Center, from the 1950’s through July 10th of 2016, 98.4 percent of mass shootings have occurred on gun-free zones, with just 1.6 percent occurring where citizens are allowed to have firearms with them.

The research was actually updated from a previous figure in response to an article written by the gun-control advocacy group Everytown.org, which attempted to dismiss the CPRC’s research, saying “the gun lobby’s claims that so-called “gun-free zones” endanger Americans are inconsistent with evidence.” The CPRC says that Everytown.org used both incomplete information, and used criteria that falls outside of what the FBI considers as qualifications for mass shootings. . . .

According to the Crime Prevention Research Center, three states — Pennsylvania, Florida and Texas — each have more than a million concealed handgun permit holders. Concealed permits are no longer required in most or all of 11 states, the organization said. . . .

Other people in attendance brought up the need for defense, including College Republicans’ President David Parkhill.

“The Crime Prevention Research Center that says 98.4 percent of shootings have occurred in gun free zones,” Parkhill said. “People don’t even know the rules are changing, and those who do are people who are concerned.” . . .

In a 2013 analysis by John Lott, the president of the Crime Prevention Research Center, he found of all the public shootings in the United States between 1950 and 2012 in which three or more people were killed, all but two occurred in gun-free areas. . . .

During the Obama administration, handgun carry permit issuances have increased from some six million to nearly 15 million. According to the Crime Prevention Research Center, more than six percent of all adults in the United States now carry a concealed weapon. . . .

In 2016, there were a horrifying 762 homicides in Chicago—more than New York City and Los Angeles, both of which are larger cities, combined. This is a complex problem, but however you try to get to the bottom of it, the politics and policies of Mayor Rahm Emanuel have their fingerprints all over these murder scenes.

After his re-election in 2015, Emanuel did three stupid things. According to John Lott, president of the Crime Prevention Research Center, Emanuel closed down detective bureaus in Chicago’s highest crime areas, often moving them to distant locations. At the same time, he disbanded some gang task forces, as these were politically unpopular with some vocal people in the crime-ridden neighborhoods (people who often blame police officers for crime and who often refuse to help officers solve crimes). Then, after the American Civil Liberties Union (ACLU) filed suit, he instituted new forms that have to be filled out by police officers after they stop someone to investigate a crime. In a recent “60 Minutes” investigation, Chicago’s former police superintendent, Garry McCarthy, said that each one of these forms takes police officers up to 45 minutes to complete. Talk about a time killer and a disincentive to stop and question possible suspects! . . .