Another Positive Review of The War on Guns

Matt Vespa has a new review of The War on Guns up at Townhall.com.

Yet, for everything that Dr. Lott has done in various publications and studies over the years, he’s now compiled in one simple book: The War on Guns: Arming Yourself Against Gun Control Lies. It’s one massive triggering event for any pro-gun control liberal. . . . .

Lott’s book serves as a how-to guide in fighting these pernicious narratives that seek to undercut one of our most vital civil liberties. . . . . 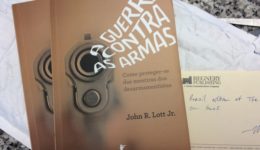