CRPC at National Review: The Case for More Concealed Handguns 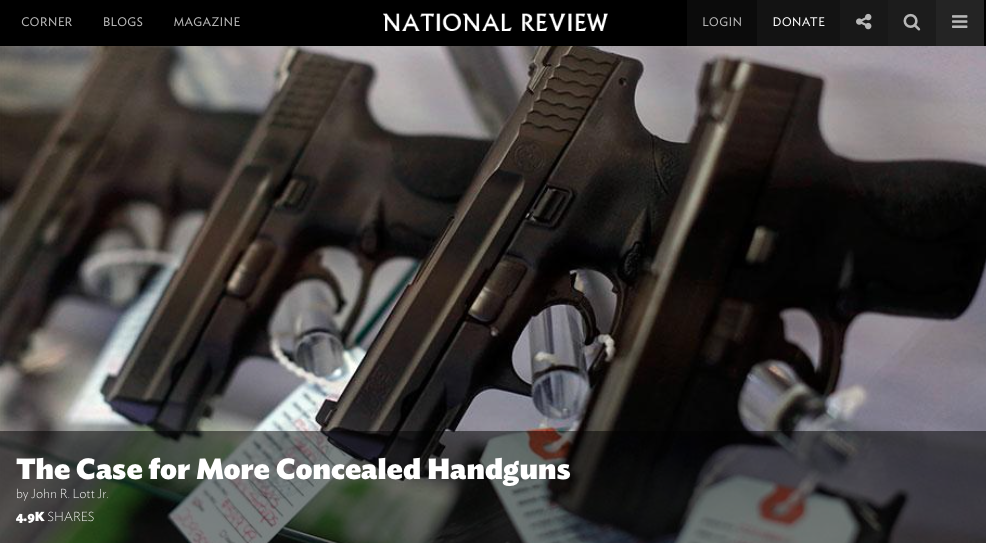 Dr. John Lott has a new op-ed at National Review that was the top piece on their page on Wednesday.  The piece, which covers the lessons that we have learned after Orlando, starts this way:

In a new Gallup poll released, a nearly two-to-one margin of Americans (64 to 34 percent) think that increasing the number of people carrying concealed handguns will help prevent terrorism. Even 45 percent of Democrats agree.

Civilians aren’t alone in these views. PoliceOne, a private organization with 450,000 members (380,000 full-time active law enforcement and 70,000 retired), polled its members in 2013 shortly after the Newtown, Conn., massacre. Eighty-six percent of respondents said that allowing legally armed citizens to carry guns in places such as Newtown and Aurora would have reduced casualties.

But not everyone has gotten the message.

While Donald Trump has called to end gun-free zones, Hillary Clinton, speaking in the aftermath of the Orlando atrocity, dismissed the idea as “reckless” and as evidence that her opponent is “temperamentally unfit” to be president.

Other Democrats have chimed in. President Obama, in his prepared remarks after the shootings at Pulse, announced: “The notion that the answer to this tragedy would be to make sure that more people in a nightclub are similarly armed to the killer defies common sense.” Bill Clinton asserted that if someone had a permitted concealed handgun at the Pulse nightclub, “it is likely that more people would have been killed.”. . .