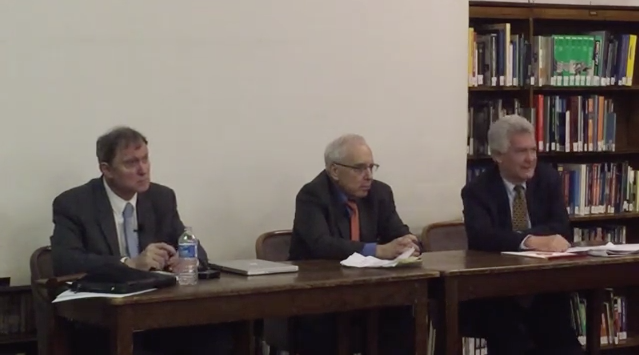 The proposition for debate was: “In order to reduce its murder-rate, the U.S. needs more stringent gun-control laws.”

John Lott argued against the proposition. Dr. Lott’s book, “More Guns, Less Crime,” now in its third edition, was first published in 1998. He holds a PhD in economics from UCLA and has held teaching and/or research positions at Wharton, University of Chicago, Stanford, and Yale. He is the President of the Crime Prevention Research Center. He originally spoke at the NYC Junto in 1999.

Paul Helmke argued in favor of the proposition. Mr. Helmke is an American politician, attorney, and advocate for gun control. He served as a three-term mayor of Fort Wayne, Indiana, President of the US Conference of Mayors, and President and CEO of the Brady Center to Prevent Gun Violence. He holds a JD from Yale Law School, is a Professor of Practice at Indiana University Bloomington, and is the founding Director of IU Bloomington’s Civic Leaders Center.

Founded in 1985, the NYC Junto is a monthly meeting hosted by investor Victor Niederhoffer. Junto meetings are moderated by Barron’s columnist Gene Epstein and Mr. Niederhoffer. Meetings occur on the first Thursday of each month, are free and open to the public, and take place at the General Society Library, 20 West 44th Street.

← CPRC on The Steve Gruber Show: Discussion on debating Gun-Control Proponents and concerns with a changing Supreme Court CPRC on Turkish TRT World's The Newsmakers to Debate the Death Penalty →