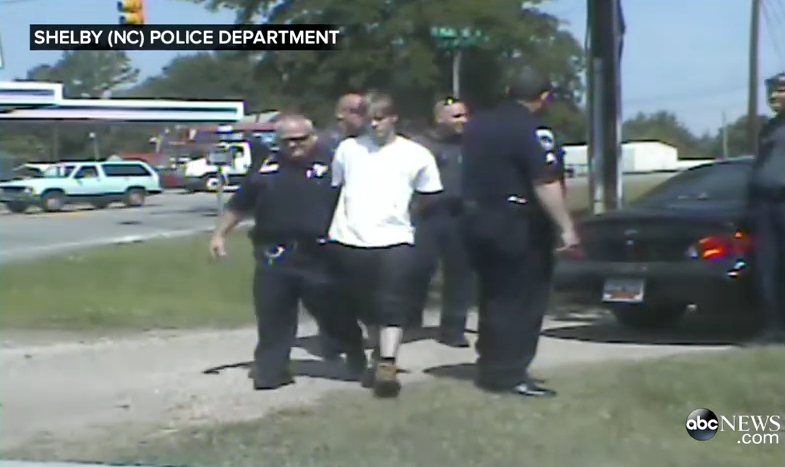 Very often we don’t have real time information.  Because we also have to close what is called the Charleston loophole, where the killer in Charleston went to buy a gun.  He filled out the form.  Under the loophole he could come back and get it after three business days.  The information that he wasn’t eligible because he had a felony conviction didn’t come through until after he went and used that gun and murdered nine people.  In a church like this, in Charleston.  So we have work to do.

Clinton claims that as a convicted felon Dylann Roof should have been prevented from buying a gun.  In fact, she is wrong on multiple counts.  No one is claiming that he was a convicted felon.  What the FBI initially claimed was that he was arrested for a felony, though, as we will point out, that also can prevent someone from being able to buy a gun.  (By the way, Clinton also mischaracterizes what happened in the Virginia Tech case when she says: “the killer at Virginia Tech had been committed, but that information was not in the records.”  See the discussion on Seung-Hui Cho available here.)  From CNN on the Roof case:

FBI Director James Comey told reporters Friday “this rips all of our hearts out” and “we are all sick this happened.” He said he concluded the mistake had been made Thursday night after reviewing the latest information.

Within days after the shooting, agents on the ground knew something was amiss and suspected that Roof’s arrest record should have prohibited the gun purchase, according to law enforcement officials.

Officials began a review, as is common after major shootings. About a week after the shooting, examiners officially denied the Roof application.

Comey said the FBI made the error due to a breakdown in the background check system and confusion with paperwork between the FBI, local police departments and county jurisdictions. . . .

The FBI originally claimed that the Charleston Church killer, Dylann Roof, was charged with felony drug possession.  Being charged with a felony that could result in a prison term of at least two years is sufficient to result in a person being prohibited from buying a gun (see copy of relevant part of criminal code below).  He can also be banned from buying a gun if he is an addict or admits to being an addict.  First, let’s take the July 10th statement from the FBI:

On April 11, Roof attempted to purchase a handgun from a store in West Columbia, South Carolina, a near suburb of Columbia. That day was a Saturday. On the next business day, April 13, an examiner in our West Virginia facility was assigned the case and began to process it.

Her initial check of Roof’s criminal history showed that he had been arrested in South Carolina March 1 on a felony drug charge. This charge alone is not enough to deny proceeding with the transaction. As a result, this charge required further inquiry of two potential reasons to deny the transaction. First, the person could have been convicted of a felony since the arrest. Second, the underlying facts of the arrest could show the person to be an unlawful drug user or addict. . . .

Importantly, as part of that arrest, the report by the Columbia police reflected that Roof admitted he was in possession of drugs. If a NICS examiner saw that, Roof would be denied permission to buy a gun. . . .

There are multiple errors here in both discussing the law and the facts of the case.  As it happens, Roof was arrested for a misdemeanor drug possession, not a felony, and that the maximum prison time that he would face was 6 months.  For example, there is this from the New York Times:

An article on June 19 about Dylann Roof, who has been accused of killing nine people at a church in Charleston, S.C., included incorrect information from law enforcement documents about an earlier charge against Mr. Roof. The charge, for drug possession, is a misdemeanor, not a felony.

Roof was charged with a misdemeanor, charge with possession not use, and he has not admitted to use.  So how can he be banned from purchasing a gun?  Here is the FBI explanation.  The key is their statement: “inference of current use may be drawn from evidence of a recent use or possession of a controlled substance.”

Dylann Roof was arrested in Lexington County, South Carolina and according to an incident report dated March 1, 2015 Roof admitted possessing Suboxone, a Schedule III narcotic, without a prescription which would have prohibited the transfer of the firearm based on the protocol the NICS Section uses for a final determination in establishing inference of current use for 18 USC §922 (g)(3) based upon the definition as provided below, 27 C.F.R. §478.11.

There are other problems with Hillary Clinton’s story here.  For example, Roof’s mother had taken the gun from him and he stole it back.  Even if he was banned from legally acquiring a gun, Roof’s family apparently owned multiple guns and presumably he could have stolen another gun if he was intent on committing a crime.

Over all, Clinton probably references supporting four or five different gun control laws in the clip at the top of the page: universal background checks (including the gun show and online loopholes), No-fly list denials, and suing gun makers and sellers for guns used in crime.

A copy of the relevant criminal code that bans people from being able to buy a gun is shown here:

(1) is under indictment for, or has been convicted in any court of, a crime punishable by imprisonment for a term exceeding one year;

(2) is a fugitive from justice;

(3) is an unlawful user of or addicted to any controlled substance (as defined in section 102 of the Controlled Substances Act (21 U.S.C. 802[law.cornell.edu]));

(g)It shall be unlawful for any person—

(1) who has been convicted in any court of, a crime punishable by imprisonment for a term exceeding one year;

(2) who is a fugitive from justice;

(3) who is an unlawful user of or addicted to any controlled substance (as defined in section 102 of the Controlled Substances Act (21 U.S.C. 802[law.cornell.edu]));

(14) The term “indictment” includes an indictment or information in any court under which a crime punishable by imprisonment for a term exceeding one year may be prosecuted.

(A) any Federal or State offenses pertaining to antitrust violations, unfair trade practices, restraints of trade, or other similar offenses relating to the regulation of business practices, or

(B) any State offense classified by the laws of the State as a misdemeanor and punishable by a term of imprisonment of two years or less.