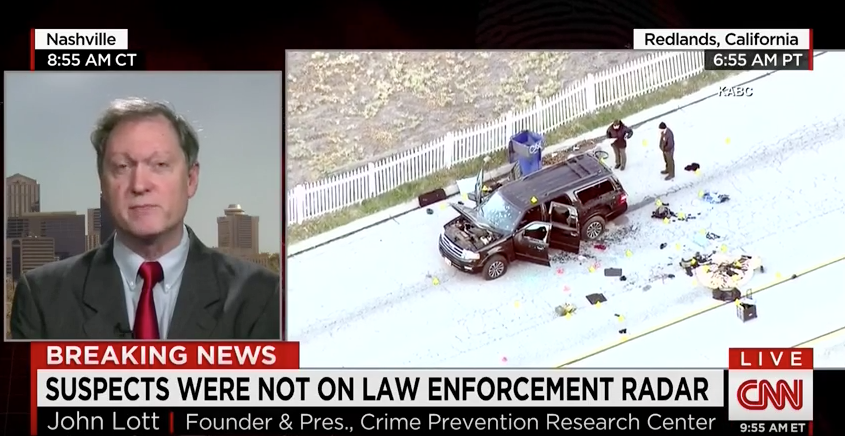 John Lott talked to Carol Costello about misleading claims in the gun control debate and what can be done stop these mass public shootings (Thursday, December 3, 2015 9:52 to 9:57 AM).  The youtube of the interview here doesn’t include the introduction where Costello uses the BBC’s claim about mass public shootings in the United States and also a source asserting that there have been 355 mass shootings so far this year.  Lott tried to correct the record on these two claims before going into the rest of the interview.  Newsbusters compares how contentious Lott’s interview was compared to that with Costello’s discussion with David Gross from the Brady Campaign.

CAROL COSTELLO, CNN HOST: The growing frequency of the incidents highlighted during this report from the BBC.

UNIDENTIFIED MALE BBC ANCHOR: Just another day in the United States of America, another day of gunfire, panic and fear.

COSTELLO: That’s how this incident is being reported overseas, the BBC calling it “just another day” of gun violence in the United States. And, according to at least one unofficial tally, the numbers support that claim. Shootingtracker.com, which defines mass shootings as incidents in which four or more people, including the gunman, are killed or injured by gunfire, says San Bernardino was the 355th — the 355th mass shooting this year alone. It was also, according to Shootingtracker’s definition, the second worst mass shooting in the United States. The first took place early Wednesday morning in Savannah, Georgia, where a gunman killed one and wounded three others. So, let’s talk about guns in America. John Lott is the founder and president of the Crime Prevention Research Center and author ofMore Guns, Less Crimes. Good morning, John.

COSTELLO: John, you know gun rights advocates and those in favor of more gun laws, they always talk at cross purposes. They can’t seem to get on the same page. And I guess I don’t feel like having an argument with you this morning. I kind of just want to find out how we can stop these shootings together. How can both sides come up with a plan together?

LOTT: Well, sure. I mean, if you have proposals you want to talk about, I’m happy to do so. I suppose, part of it, though, is inflammatory claims, such as the two that you just went through from the BBC, as well as the tracking numbers there. I mean, first of all, these occur —

COSTELLO: No, John, let’s be serious. There are too-

LOTT: -at about the same rate in Europe-

LOTT: -we should be accurate.

COSTELLO: So let’s just concentrate on that. There’s a lot of gun violence in this country. We can all agree on that.

LOTT: But the point was, I was just saying in order — there’s a reason why you started with those two things. I’m just saying, just to be accurate, Europe has about the same rate of mass public shootings as we have here in the United States. France, this year, has had 508 people killed or wounded in mass public shootings. In the entire Obama presidency, there has been a total of 424. And this tracking number that you just had, the vast majority of those are gang fights, which are bad. Gang fights over drug turf are bad things–

COSTELLO: John, let’s just concentrate on the matter at hand —

LOTT: But it’s, I think, misleading.

COSTELLO: — gun violence in the United States and how we can stop it, and how we can prevent these mass shootings, how we can get mentally unbalanced people from getting a hold of guns. How can we do that? How can we all get on the same page?

LOTT: Right. Well, I think you’re going to have a hard time stopping terrorists or others from getting a hold of weapons. I mean, if you really believe someone is a danger to others, you should lock them up. But simply going and telling them they’re not going to be able to legally buy a gun when these individuals, such as the ones in San Bernardino, I wouldn’t be surprised if they were planning this a year or more in advance. It’s very common for these types of mass public shootings to be planned at least six months, and sometimes even a couple years in advance. And if somebody’s planning that long in advance, they’re going to make the pipe bombs. They’re gonna go and get a hold of the other the weapons that are there and this is very difficult to stop them. The question is, what’s your backup plan? What do you do when you can’t stop these individuals from making these types of weapons? And I hope we’re beginning to get to the place where we allow individuals to go and defend themselves. California, it’s extremely difficult for anybody to go and get a concealed carry permit, to be able to go and defend themselves against these types of attacks. The type of attack that occurred at Planned Parenthood on Friday or this or at the Oregon school or all places where —

COSTELLO: But let’s be honest about one thing, John. Two of the weapons that these suspects used were purchased legally. In fact, all the guns, as far as we know, were purchased legally. So, even though there are tight gun controls in the state of California, it’s still easy to buy a high-powered weapon in the United States. And that’s because there are so many guns out there. Over the Thanksgiving Day holiday, 185,000 firearms were purchased — that’s a record for the holiday season. Lots and lots of people have guns in this country, yet these mass shootings keep happening. So how can more guns be the answer?

LOTT: Well, the question is where people are allowed to have guns. If you ban guns from certain areas, people like these killers don’t — aren’t stopped by the bans. The people who obey the laws are law-abiding good citizens, who are no longer able to defend themselves, who are essentially sitting ducks. You make it safer for the attackers to go and commit these crimes because they don’t have to worry about law-abiding citizens being able to stop them.

COSTELLO: Alright. I have to leave it there, John.

LOTT: Thank you very much.