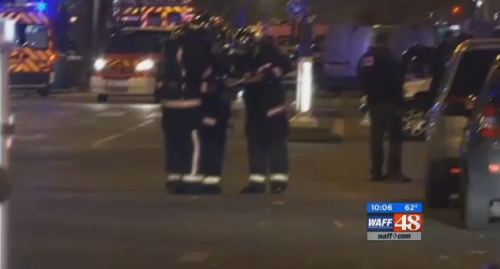 Currently there are about 13 million concealed handgun permits in the US, about 5.2% of the adult population.  With people thinking of the terrorist attacks in Paris, there has been a significant increase in applications for concealed handgun permits.  But even a doubling of permits will leave the US well below the percent of the adult population in Israel with permits, but it would still increase the odds that someone would be available to stop a killer intent on killing many people.

From WPVI in West Chester, Pennsylvania: “In the aftermath of the terror attacks in Paris, some Pennsylvania counties have seen a sharp surge in concealed-carry gun permit applications.  That includes Chester County, where the sheriff’s department has seen a flurry of activity as requests have doubled. . . . Sheriff Carolyn Bunny Welsh said the interest is directly related to the terror attacks.  “We normally would process up to 100 applications. This week we have processed 200 applications, and I have a waiting room full of people,” she said.  Two sheriffs in western Pennsylvania – in Allegheny and Westmoreland counties – have seen the same kind of surge in applications for permits to legally carry concealed handguns.”

From the Times-Tribune (Scranton, Pennsylvania): “On a normal day, the Lackawanna County sheriff’s office collects an estimated five to 15 applications to carry guns.  This week, the department processed 132 permit applications as of about 1 p.m. Friday, meaning the average surged to at least 26 per day.  “There’s a line of people going out the door,” Sheriff Mark McAndrew said while 16 people crowded the department’s lobby. “It’s been that way ever since the (terrorist attacks) in France.” . . .”

From the Morning Call (Allentown, Pennsylvania): “Several counties, including Lehigh and Northampton, have seen an increase in permit applications or renewals in the wake of the attacks that killed 129 people.  “We’ve seen a bit of an increase — a 10 to 15 percent increase over the past couple days,” said Chief Deputy Ken Coia of the Lehigh County Sheriff’s Department. “I can only attribute it to Paris.” . . . “

Fox 29 News in San Antonio, Texas: “Not only have guns sales gone up, concealed carry licenses have as well. McCall says their concealed carry classes have doubled in the last week. He says we can’t let terrorism around the world stop us, but we can be prepared.“

NBC Channel 12 WSFA in Madison County, Alabama (Huntsville): “In terms of gun permits, the Limestone County Sheriff’s Office saw the biggest spike in permits given out since Friday.“