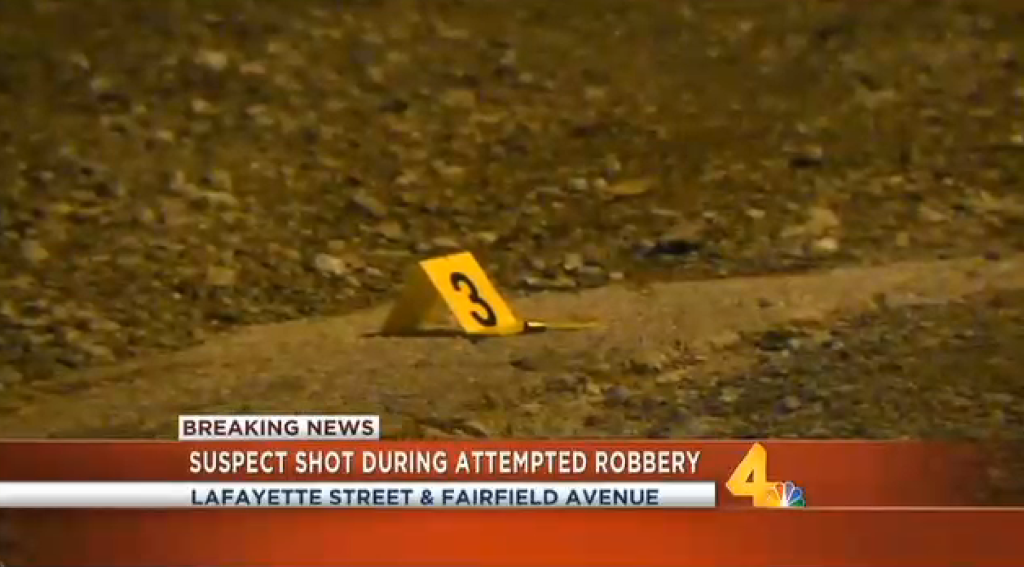 . . . . 74-year-old Larry Dean Claybaker was getting into his car at the intersection of Lafayette Street and Fairfield Avenue when two teens tried to rob him around 10 p.m.

The teens allegedly took his cellphone and told him to get out of his car, which is when Claybaker reached into his pocket and pulled out a semi-automatic pistol, firing one round at each suspect.

He shot 17-year-old Keion Andreas Hayes in the stomach and held him at gunpoint until police responded. . . .

He has a concealed carry permit and was acting in self-defense, according to officials.

. . . Shyheem Gallishaw, 18, died at the scene just after midnight Monday from a gunshot wound to his upper body, according to the Richland County coroner’s report.

Gallishaw was shot after allegedly trying to rob another person, who shot Gallishaw in self-defense, according to Richland County officials. No charges will be filed against the shooter. . . .

Also this story on this incident

the victim was being robbed on the intersection of Townsend and Hutchinson Streets in Columbia, when he reached for his gun to defend himself and shot the man. . . .

Lt. Wilson said there will be no charges against the victim in this case as the shooting was found to be in self-defense. . . .

Birmingham, AL, July 6, 2015 — Another case where the robber just starts shooting unprovoked at the victim.  At least with the victim being able to shoot at the robber, he was able to drive the robber away.

A cab driver is in critical condition after he exchanged gunfire during an early-morning holdup attempt in his Birmingham driveway. . . .

The shooting happened shortly after 5:30 a.m. in the 2400 block of 10th Avenue South, just outside of the Southtown public housing community. Birmingham police spokesman Lt. Sean Edwards said Gideon had received a phone call just after 5 a.m. to go pick up a fare.

Gideon left his home and was opening the fence at the end of his driveway to pull out his cab when he was approached by a black male, Edwards said. The gunmen attempted to rob Gideon and then shot at him. Gideon returned fire but police don’t believe the robber was injured. He fled the scene. . . .

At least four shots were exchanged, they said. The cab was struck by bullets multiple times. . . .