After an Uber driver in Chicago used his gun to stop a mass public shooting and save lives, the company is moving to ban guns in its cars?  Uber has posted the above policy note on its website.

We have adopted a no-firearms policy to ensure that both riders and drivers feel safe and comfortable on the platform.

Yet more evidence that these killers are deterred by people with guns: Charleston, South Carolina Church Shooter

We have previously pointed out how mass public shooting after mass public shooting keep occurring where guns are banned. Here is yet another case of these killers avoiding places where people with guns might be able to stop their killing spree. From the Associated Press:

Last week, while they were drinking in the back of Scriven’s house, Roof blurted out his plan about carrying out a mass shooting at the College of Charleston. 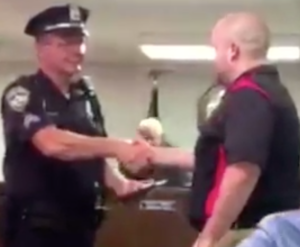 Wheeler said he was being attacked by a homeless man who later acknowledged to officers that he was high on crystal meth.

John Lott was interviewed by Dana Loesch on her TV show Dana! about the claim that there are few defensive gun uses compared to homicides. The interview took place on Thursday, June 18, 2015, 6:57 to 7 PM.

The horrible tragedy last night that left nine people dead at the Emanuel African Methodist Episcopal Church in Charleston, S.C., probably could have been avoided. Like so many other attacks, the massacre took place in a gun-free zone, a place where the general public was banned from having guns.

Another Shooting in a Gun-free Zone: Nine Dead at the Emanuel African Methodist Episcopal Church in Charleston, South Carolina

Not surprising that yet another mass public shooting has taken place where guns were banned.  Yet, again, the ban only ensured that the victims were vulnerable.  Here is a synopsis of South Carolina law (UPDATED moved paragraph from the middle to here since Media Matters apparently wasn’t able to read all the material (original post available at bottom)):

CPRC talks to Gavin McInnes about guns and disarming the police

John Lott talked to Gavin McInnes about guns and disarming the police on Tuesday, June 16th from 10:03 to 10:15 PM.

A new study in the American Journal of Public Health claims that the state of Connecticut’s 1995 gun licensing law has reduced firearm homicide rates by 40 percent.  But this just released study gives academics a bad name.  Not surprisingly, anti-gun activist and former New York City mayor Michael Bloomberg and the left-wing Joyce Foundation funded the research.

CPRC talks to Michigan Talk Network about the new push for gun licensing, and the empirical claims behind the push

John Lott talked to Steve Gruber about proposed laws that would force people to get licenses and register their handguns (Tuesday, June 16th, 6:33 to .6:41 AM).