A news article in the Washington Times:

John R. Lott Jr., president of the Crime Prevention Research Center, said Americans interested in owning firearms are reacting to the gun control debate by buying more of them. But he also said polling shows a fundamental shift in attitudes, with Americans increasingly believing that the right to bear arms must be protected and increasingly seeing guns as a way to make homes safer, rather than as a potential danger in and of themselves.

Indeed, in 2000, 51 percent of Americans said guns made homes more dangerous, according to Gallup, the polling firm. By last year, that had dropped to 30 percent, and a full 63 percent now said guns made a home “safer.”

“My own personal belief is that change in the beliefs about guns and safety has served as the basis for why you see increasing opposition to gun control during that same period of time,” Mr. Lott said.

Mr. Lott said firearm sales, even more than manufacturing statistics, are a measure of the health of the movement, and those are also on the rise, with adjusted background checks — a good proxy for sales — growing from 8.9 million a year in 2008 to nearly 15 million in 2013. 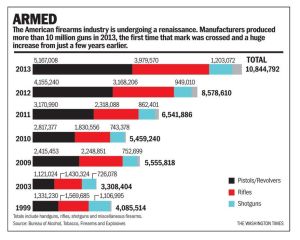 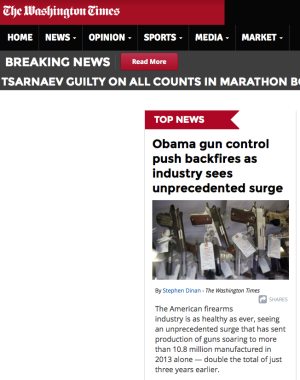