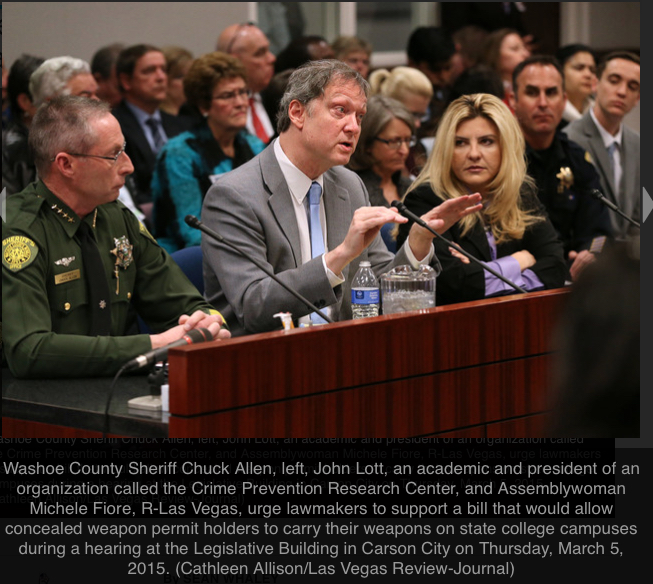 A video of the first panel testifying on the bill to reduce the number of gun-free zones in Nevada is available below (Lott’s testimony starts at 5:54 into the video below).  Since the first panel went through a lot of the facts regarding guns and schools as well as mass public shootings, the opponents of the bill were put in a difficult position.  Proponent after proponent would bring up hypothetical examples of what might go wrong and the Chairman Ira Hansen would say: “As we have heard during the first panel, that type of concern hasn’t occurred.  Do you have any evidence that the type of concern that you are raising has actually occurred?”  And the answer was consistently “no.”  For those interested in watching the entire testimony from Thursday see here (see the video starting at 36:20).

Here is news coverage from the Las Vegas Review Journal:

. . . Proponents of the bill included John Lott, an academic and president of an organization called the Crime Prevention Research Center, who offered statistics to debunk some of the arguments against the bill.

Lott said his review of mass shooting incidents shows that perpetrators intentionally seek out gun-free areas to commit their crimes.

But Lott defended his research, and said Media Matters for several years would not let him correct the errors in the many attacks on him in the comment section on their site.

“They won’t even let their readers know there is a response,” he said.

Lott said his organization also has a prestigious academic advisory board.

The published research runs about 70 percent finding a benefit from campus carry laws for reduced crime to 30 percent showing no effect, he said.

According to the National Conference of State Legislatures in information dated from February 2015, 23 states let universities make the call on carrying concealed weapons, 20 ban weapons and seven, including Utah, Colorado and Idaho, allow firearms to be carried with some limitations. . . .

From the Las Vegas Sun:

. . . The testimony was emotionally charged on both sides and involved victims of violent crimes who were divided on the effect of guns at schools, places that have been home to some of the nation’s most horrific mass shootings in recent years.

Democratic lawmakers peppered him with questions about the potential of a campus carry permit holder shooting an innocent bystander.

Lott said he’s found no examples of such instances in his research across the country. He said permit holders are more lawful citizens than police officers and non-permit holders.

After his testimony Lott was asked to go down to the Nevada Assembly floor where he was introduced to all the representatives.