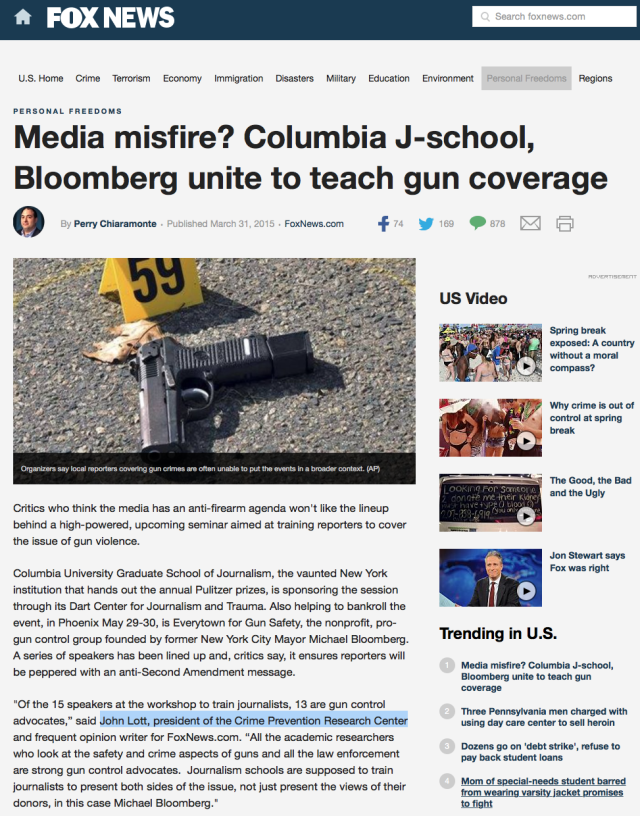 Perry Chiaramonte’s news article has this discussion of the CPRC and our survey that Gary Mauser oversaw of economists and their views on gun control:

Critics who think the media has an anti-firearm agenda won’t like the lineup behind a high-powered, upcoming seminar aimed at training reporters to cover the issue of gun violence.

Columbia University Graduate School of Journalism, the vaunted New York institution that hands out the annual Pulitzer prizes, is sponsoring the session through its Dart Center for Journalism and Trauma. Also helping to bankroll the event, in Phoenix May 29-30, is Everytown for Gun Safety, the nonprofit, pro-gun control group founded by former New York City Mayor Michael Bloomberg. A series of speakers has been lined up and, critics say, it ensures reporters will be peppered with an anti-Second Amendment message.

“Of the 15 speakers at the workshop to train journalists, 13 are gun control advocates,” said John Lott, president of the Crime Prevention Research Center and frequent opinion writer for FoxNews.com. “All the academic researchers who look at the safety and crime aspects of guns and all the law enforcement are strong gun control advocates. Journalism schools are supposed to train journalists to present both sides of the issue, not just present the views of their donors, in this case Michael Bloomberg.” . . .

Lott said reflexively putting individual gun crimes in a broader context raises a red flag, as does involvement of Bloomberg’s group, whose methodology has been criticized by Lott’s institute in the past. A recent survey by the Crime Prevention Research Center found Everytown for Gun Safety, which publishes studies and statistics widely cited by the media, relies on economists and researchers who share Bloomberg’s views on gun use in crime.

The rest of the news article is available here.  On the conservative side are commentator S.E. Cupp and (tentatively) lawyer David Kopel.  The Dart Center labels Cupp as a conservative, but doesn’t even label the gun control advocates as such.  Here are some more details (bios and announcement).

Clarence W. Dupnik, the Sheriff of Pima County Arizona — CBS notes: “Dupnik chastised the Arizona legislature for lax gun laws and said the state had become ‘the Tombstone of the United States of America.’”  Politico notes that he is a liberal Democrat.

Roseanna Ander, MPH, is the founding Executive Director of the University of Chicago Crime Lab — “We absolutely have a sub-optimal federal policy right now on guns, and a lot of the things that [Obama] outlined are really important and promising.”  She oversaw the left wing Joyce Foundation’s gun violence program and was a Soros Justice Fellow.

Philip J. Cook, PhD, is ITT/Sanford Professor of Public Policy at Duke University — supports “a ban on assault weapons” and many other gun control measures, but says that the 1994 to 2004 ban didnt’ go far enough.

Jim MacMillan is the program manager for the Center for Public Interest Journalism at Temple University — supports the notion that “Policy-based solutions seem simple: fewer guns would equal fewer deaths.”

Jill Messing, MSW, PhD, is an Assistant Professor in the School of Social Work at Arizona State University

Garen J. Wintemute, MD, MPH, Professor of Emergency Medicine, Director of the UC Davis — “The assault weapons ban was a great idea.”  “Gun policy in the US . . . reflects the priorities of a radical fringe of gun owners.”

Lawrence E. Rosenthal is a professor at the Dale E. Fowler School of Law at Chapman University — strongly for gun control

David B. Kopel, JD, (tentatively confirmed) is Research Director of the Independence Institute in Golden, Colorado — against more gun control

Mark Follman is an editor at the left wing Mother Jones magazine, who has frequently written false claims about guns.

Jennifer Longdon is a Phoenix-based speaker, writer, and activist — Mother Jones labels as a “gun-reform advocate.”  She has previously been caught lying about the gun control issue.

Jacquee Petchel is executive editor at Gun Wars.  One gets an idea of where the organization is coming from by looking at the questions that they are examining and the way those questions are phrased: Nevada: Help us report on suicide prevention at gun stores; Have you or someone you know been injured or killed in a gun-related incident?; Have you been threatened with a gun by someone you know?; Guns on College Campuses?; Where do you keep your firearm?; Have you bought a firearm online or at a gun show?; and Should background checks be required for gun purchases?  Note that none of these questions discuss defensive gun uses.

Cheryl W. Thompson is an investigative journalist for The Washington Post.  While her articles don’t take a direct and obvious bias, it appears as if she only interviews professors who are gun control advocates for her stories (here for Wintemute and here for Rosenfeld and Berk).

Shoshana Walter is a public safety investigative reporter for The Center for Investigative Reporting, which is itself critical of those who support allowing people to defend themselves and supportive of gun control.

S.E. Cupp is a conservative columnist, author and commentator.

UPDATE: Other news coverage of the Columbia J-School workshop is available here. 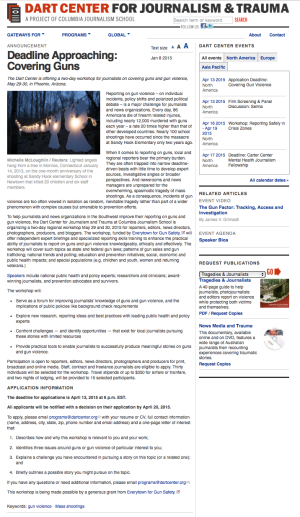 The Dart Center website encouraging journalists to apply parrots Bloomberg’s type gun control claims.  For example, they claim: “Nearly 100 school shootings have occurred since the massacre at Sandy Hook Elementary only two years ago.”  Yet, everyone from CNN, Politifact, and CPRC in Fox News have pointed out that this claim is wildly inaccurate.  They grossly exaggerate the number of people murdered with guns each year (nearly 12,000 murdered with guns each year) when you can see from the FBI reports that since 2010 the number has been less than 9,000.  Their claim that the murder rate in the US is “a rate 20 times higher than that of other developed countries” is also based on inaccurate Bloomberg information.