Yet another mall shooting where guns were banned: Monroeville Mall near Pittsburgh 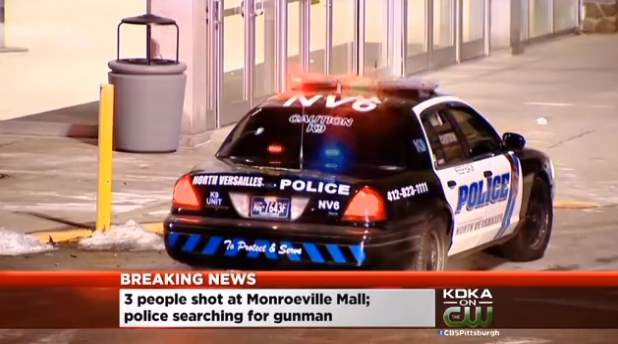 Time after time at the mall shootings keep occurring at places that ban guns: the Trolley Square Mall in Salt Lake; Westroads Mall in Omaha; Nebraska, the Clackamas Town Center Mall in Portland, the Mall in Columbia, Maryland; Oregon; or Melbourne Square Mall in Florida.  Often these attacks occur at the only enclosed malls in the area that banned guns.  In several of these cases state law allows permitted concealed handguns, but if a person is asked to leave the mall and they refuse, they can be arrested for trespassing.  In addition, some law-abiding individuals might feel compelled to follow the wishes of the property owner even if they realize that the law allows them to carry their concealed handgun.  Fortunately, in two of those cases, the Trolley Square and the Clackamas Town Center Malls, people ignored the signs banning guns and carried them in anyway, allowing them to stop the attacks.  In the Trolley Square Mall, the person violating the ban was an off-duty police officer who then faced a disciplinary hearing at his job for violating the gun-free zone signs.

On Saturday evening, there was another shooting at a mall that posted signs banning permitted concealed handguns.

Gunfire erupted at a Pittsburgh-area shopping center on Saturday evening, wounding three people, two critically, in a shooting that targeted one of the victims, police said. The mall and a hospital’s emergency room were placed on lockdown as police searched for the suspect.

The shootings occurred inside the Macy’s at the Monroeville Mall at about 7:30 p.m., sending shoppers running. Police went store to store to evacuate the mall, which closed for the night.

Chief Douglas Cole said two men and a woman were shot, including a man who was targeted and was struck at least once. The other two victims were bystanders caught in the line of fire, he said. . . .

Cole said police identified a suspect, whom he described as a black male in his late teens who is between 5-foot-7 and 5-foot-9 inches tall and was wearing dark clothing. No arrests have been made.

The three victims were taken to Forbes Hospital with gunshot wounds, hospital spokesman Jesse Miller said. One was in stable condition, he said. Cole said the other two suffered life-threatening injuries. . . . .

What makes this news coverage absolutely unique is that the Associated Press story on the incident noted that the attack occurred where guns are banned.

Weapons are banned at the mall, whose code of conduct specifically prohibits “Carrying or displaying weapons of any kind except those carried by certified law enforcement officers in the performance of their duties.” . . .