CPRC in the New York Daily News: “Dangerous distortions about cops shooting black men: An oft-cited figure is based on incomplete data and questionable math”

Exaggerations have poisoned discussions about relations between blacks and the police.

“Black men between the ages of 15 and 19 are 21 times as likely as whites to be killed by a police officer,” said Chuck Todd on Sunday’s “Meet the Press.”

Harvard Law Professor Charles Ogletree echoed Todd. “The data is clear, that black boys are being killed by white police officers around the country.” The claim was repeated frequently on other shows.

But those numbers aren’t entirely accurate, and they are far from the whole truth.

There’s no denying that accidental deaths at the hands of police — like the killing of 12-year-old Tamir Rice, who was playing with a toy gun in a public park — are horrible tragedies.

Nor is there any denying that blacks feel discriminated against. According to a 2013 Pew Research Center survey, 70% of blacks believed that the police treated whites better than blacks. By contrast, only 37% of whites agreed. Last week, President Obama emphasized how blacks’ distrust of police is “rooted in realities” and how the anger to the verdict was “an understandable reaction.”

But at least part of this feeling seems to stem from how the media covers the issue.

Todd and Ogletree relied on an analysis of FBI data by ProPublica and Slate. Slate’s headline read, “Black Teens Vastly More Likely to Be Killed by Police Than Whites Even After Adjusting for Crime Rates.”

If their claim is right — if police do unjustly shoot blacks at vastly higher rates — it is a serious indictment of the police. But, fortunately, these allegations are false.

One allegation is that 15-to-19-year-old black males die at the hands of the police 21 times as often as do white males of the same age. Another claim is that blacks commit violent crimes no more than two to three times as often as whites do.

By combining these two claims, some journalists conclude that police still kill young blacks at least seven to 10.5 times as often as they kill young whites.

But the original 21-fold claim is based on worse than unreliable data. ProPublica acknowledges that the data on justifiable police killings are “terribly incomplete. . . . Vast numbers of the country’s 17,000 police departments don’t file fatal police shooting reports at all.”

But they don’t make it clear that literally only a couple hundred police departments (217 in 2012, just 1.2% of all the departments in the country) report these numbers.

Even worse, the very few police departments that do report are predominately urban areas, which tend to have much higher concentrations of blacks. This skews the numbers to over-represent black deaths.  . . . . 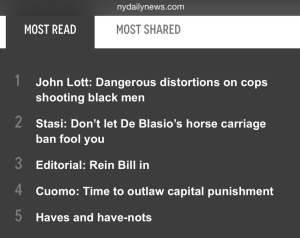 Twelve days after the was run in the Daily News it is still in the top most popular pieces. 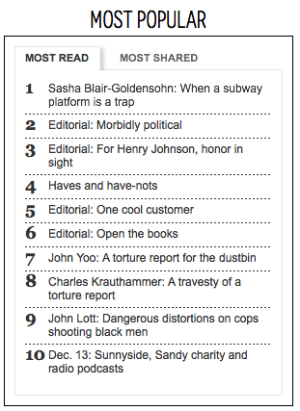 Three weeks after the piece was run it is getting even more attention. 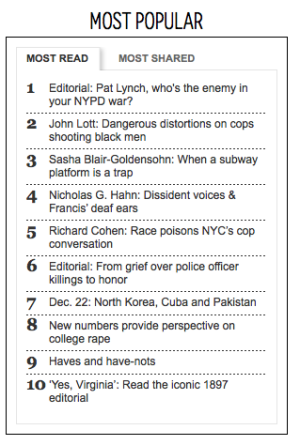 At Townhall: While Democrats Think This Bill Will Increase Illegal Immigration, The Opposite Will Happen

At Fox News: Why Bloomberg’s 2015 Racist ‘Stop and Frisk’ remarks are riddled with inaccuracies