CPRC at Fox News: “The truth about young black men and police shootings”

Tensions are still high in Ferguson, Mo., after the Aug. 8 police shooting of Michael Brown. On Friday, it was reported forensics showed Brown’s blood was on both the inside of police officer Darren Wilson’s car as well as Wilson’s gun. The gun had also been fired twice within the car. This evidence hardly squares with early witness accounts that Brown was shot with his hands in the air while he was surrendering.

With forensic evidence finally coming in, Officer Wilson’s shooting Brown is looking as if it were justifiable self-defense. But that hasn’t stopped people from making it a racial issue.

Over the weekend, the New York Times noted some black leaders, such as Congressman Elijah E. Cummings, D-Maryland, “often invoke voting rights and the death of Michael Brown, the unarmed black man shot by a white police officer in Ferguson, Mo., as a way to mobilize black voters.”

About a week ago journalists at ProPublica and Slate further fueled the anger many blacks felt about the shooting. Slate’s headline read: “Black Teens Vastly More Likely to Be Killed by Police Than Whites Even After Adjusting for Crime Rates.”

UPDATE: David Klinger, a former police officer and current criminology professor at the University of Missouri-St. Louis, was used by ProPublica to support its claim that its study had found something important.  When John Lott talked to Klinger he denied that he had made the comments that ProPublica quoted him as saying and he told Lott that he had warned ProPublica that the data was “no good.”  He was also quoted by Saint Louis Public Radio as saying:

. . . Klinger doesn’t mince words: “The ProPublica thing needs to be shut down. They cherry picked the three years that had the worst disparity instead of being honest about the whole picture.

“The ProPublica analysis is absolute garbage because it is based on the FBI’s supplemental homicide reports. I told them, don’t do it because the stats are horseshit.” . . .

Top of the page at Fox News. 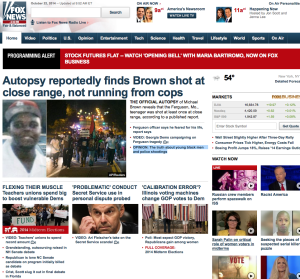 The piece was the most read opinion piece at Fox New during the whole day.