Fox News on Taylor Woolrich’s story, denied a chance to defend herself from stalker

Here is the first part of the story that was the lead up at Fox News:

A 20-year-old Dartmouth student says she may have to give up her Ivy League dream and drop out of school because the prestigious college won’t allow her to carry a gun — to protect herself against a predator.

Taylor Woolrich, a junior, says Dartmouth administrators told her they won’t let her carry a gun on campus, even though she lives in fear of a man who has been stalking her since she was a high school student in San Diego.

“It’s absolutely unfair,” Woolrich said about her attempts to have the school make an exception to its weapons ban. “It’s one of the hardest things I’ve had to deal with.”

Woolrich was 16 years old and working in a San Diego café when she says a man came in to buy coffee and then kept returning throughout the day, staring at her for long periods of time and trying to flirt with her. The man, 67-year-old Richard Bennett, kept this up for days, she says, even sitting outside the store for an entire day and then following her home, demanding that she talk to him and saying he was “trying to protect her.”

She filed a restraining order, but it did little to keep Bennett away. Woolrich says he constantly harassed her during her first two years at Dartmouth, stalking her on social media and sending messages in which he “promised” to fly across the country to see her at college.

“I thought they were empty threats, but when I came home from school last summer, he was at my front door within eight hours of my plane landing,” she said. “That’s when I realized how serious it was.”

Woolrich and her family called the police, and Bennett was arrested. A search of his car uncovered a slip noose, a knife, gloves and other items.

Bennett is currently in jail in San Diego County, accused of violating the restraining order and felony stalking, as well as other charges. His next court date is Aug. 20. If convicted, his maximum sentence would be four years.

Woolrich says she inquired about obtaining a permit to carry a concealed weapon in California and learned that the minimum age to get one is 21, though exceptions can be made under special circumstances. She says the Sheriff’s Licensing Division told her she could qualify, and she learned the same exception can be granted in New Hampshire, where Dartmouth is located.

But Dartmouth administrators told her she was “absolutely not” allowed to carry a weapon on campus. She says she tried to plead her case and was told to speak with several campus officials, all of whom provided little to no help.

“There’s no option. There’s no one to go to. They don’t want to hear my case,” she said.

Many colleges across the country have banned guns on campus to prevent mass shootings and accidental shootings by irresponsible or inebriated students. But the pro-gun rights Crime Prevention Research Center, in a study published on Monday, said there have been no reported problems or issues with college-age permit holders on campuses in the nine states – Colorado, Florida, Wisconsin, Utah, Pennsylvania,Oregon, Mississippi, Kansas and Idaho – whose laws mandate that students and others be permitted to carry concealed handguns on public college grounds.

“There’s this fear about the possibility of students causing problems, but people talk about these things without actual examples,” the center’s president, John Lott, told FoxNews.com. “By far, the safest course of action is to carry a gun for protection, especially for female victims.”

“[Woolrich] has legitimate concern,” he added. “There’s only so much a restraining order can do.”

Woolrich says Dartmouth’s Department of Safety and Security told her that instead of carrying a gun, she should call campus security and arrange for an escort if she felt unsafe after dark. But she says she was often asked to justify her requests when she called, and security officers gave her a hard time for calling often.

“What they don’t understand is that it’s not enough,” she says. “Stalkers just don’t only show up after dark. Unless they have an armed guard in front of my dorm room, I’m not sure how safe I will be. I don’t think there’s much an unarmed guard can do.” . . .

The story has been the lead up at Fox for quite some time today. 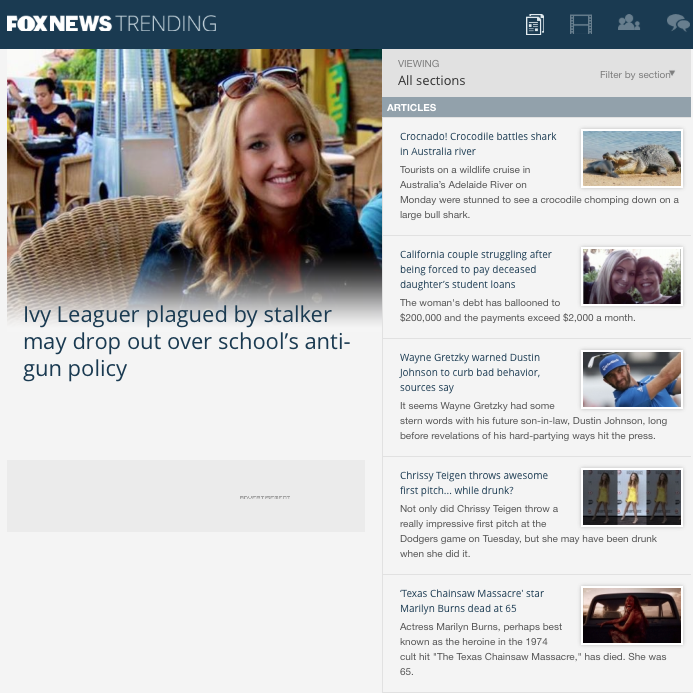 ← Students for Concealed Carry/CPRC conference on gun-free zones Taylor Woolrich's op-ed at Fox News describes what it is like to be stalked, lots of other media coverage →