CPRC Concealed Carry Report on Concealed Handguns in the News

A dramatic spike in the number of Americans with permits to carry concealed weapons coincides with an equally stark drop in violent crime, according to a new study, which Second Amendment advocates say makes the case that more guns can mean safer streets.

The study by the Crime Prevention Research Center found that 11.1 million Americans now have permits to carry concealed weapons, up from 4.5 million in 2007. The 146 percent increase has come even as both murder and violent crime rates have dropped by 22 percent.

“When you allow people to carry concealed handguns, you see changes in the behavior of criminals,” said the center’s president, John R. Lott, a Fox News contributor. “Some criminals stop committing crimes, others move on to crimes in which they don’t come into contact with victims and others actually move to areas where they have less fear of being confronted by armed victims.”

The report was extremely widely read and ended up getting over 200,000 likes on Facebook. 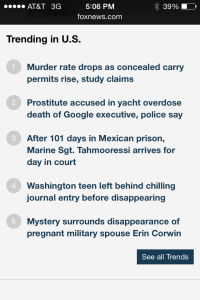 The Blaze: What One Recent Study Found About Murder Rates and Concealed Carry Permits Is Likely to Make Gun Owners Smile

More than twice as many Americans now hold concealed carry permits compared to seven years ago, and a new study is pointing out a drop in murder and violent crime rates during this same time frame.

With the last concealed carry report from the Government Accountability Office three years ago indicating that about 8 million Americans held permits, the research center said its data analysis shows concealed carry permitting is “growing at faster and faster rates.”

The report acknowledges that many factors, not just the number of concealed carry permits, contribute to crime rates in different areas. Looking though at how crime rates varied before and after there were changes to permitting rules, “our analysis suggests that each 1 percentage point increase in the percent of the adult population holding permits is roughly associated with a 1.4 percent drop in the murder rate.”