What does the research on the death penalty actually show? 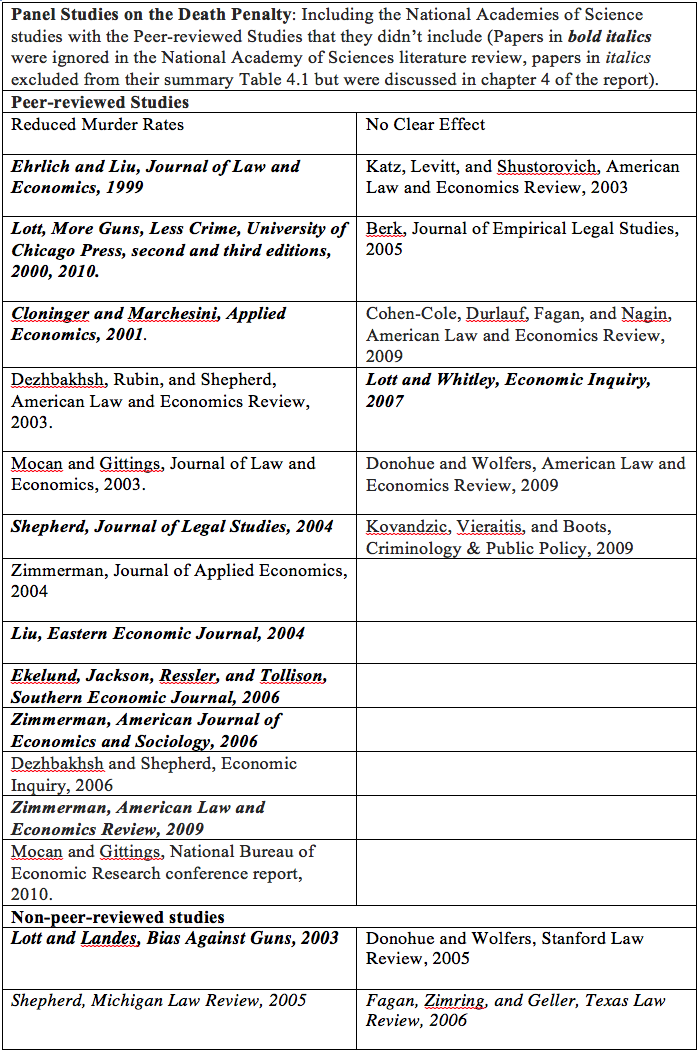 The 2012 National Research Council report on “Deterrence and the Death Penalty” has a table showing only 10 panel studies on the death penalty (those shown above in plain type). No explanation is provided for why these studies are excluded. I have placed one of my studies showing some weak support for the death penalty in the “no clear effect” column, but it presumably would have been difficult for them to include that and ignore my other research showing a clear and consistent benefit from these laws.

Most disappointingly, the NRC report does not discuss the serious problems with most of the studies that find no clear effect. The few studies that fail to find any deterrence from the death penalty have done some odd things. For instance, they measure the execution rate in strange ways. Take an approach first used by Lawrence Katz, Steven Levitt, and Ellen Shustorovish and later by John Donohue and Justin Wolfers. They do not look at the percent of murders that result in execution, but instead at the number of executions per prisoner.

In addition, the media should understand that members of the NRC report were put on the panel (names in bold) precisely because of their views in the debate.

Ironically, the report that Nagin edits cites one of his papers in the American Law and Economics Review from 2009 but ignores another paper from that same issue of the journal by Zimmerman that argues against Nagin’s position.

← So what caused crime rates to go up in 2012 in Chicago?: An extended discussion on the Dennis Miller Radio Show CPRC in the News: "A Reply to The Atlantic on the Death Penalty" →