This is the second exchange in the letters section of Scientific American that John Lott has had with Michael Shermer in the last year. 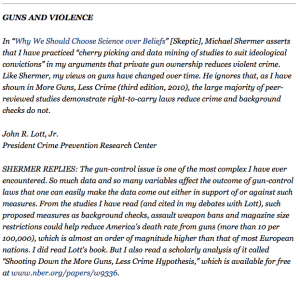 Of course, the single paper that Shermer cites was mentioned and discussed at length in the review of the literature that Lott provided in More Guns, Less Crime (click on screen shots to make them larger). Unfortunately, Scientific American wasn’t willing to allow a link to this list of papers. 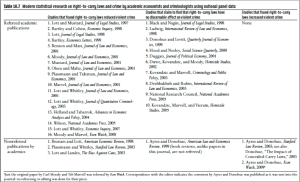 The letter that Lott originally sent in was this:

In “Why we should choose science over beliefs” (9/2013), Michael Shermer portrays himself as the rare, truly unbiased individual. In contrast, I am “cherry picking and data mining of studies to suit ideological convictions.”

Shermer’s cites as evidence of his objectivity that his views on guns have changed over time. Well, my views have also changed, but, unlike his new politically correct views, I have done so at some personal cost. I never grew up with guns and only started this research by accident. The strong evidence of self-defense deterring crime came as a surprise.

On gun control, Shermer ignores that the clear majority of studies published in peer-reviewed journals by economists and criminologists contradicts his conclusion and find that right-to-carry laws reduce violent crime and none claim an increase in murder, rape or robbery (More Guns, Less Crime, 2010, pp. 282-91).

On background checks the research is similar, and Shermer ignores safety concerns: Virtually everyone stopped by background checks are false positives, preventing some law-abiding citizens who quickly need a gun for self defense from obtaining one. 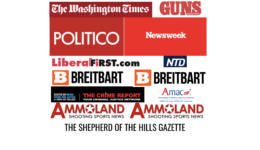