The fact that federal court judges are citing Mother Jones’ claims about guns as evidence, particularly for what is cited, is pretty disappointing. We were recently asked to evaluate Mother Jones’“10 Pro-Gun Myths, Shot Down.” Virtually all these responses were widely available in the literature, but unfortunately Mother Jones neither acknowledges nor addresses this literature.

Myth #1: They’re coming for your guns.
Possibly Mother Jones might want to read the mainstream news. The government probably won’t be rounding up “all” the guns any time soon, but what concerns people is how gun registration has already been used in parts of the United States as well as other countries to confiscate guns.

Myth #2: Guns don’t kill people—people kill people.
A discussion of international data is available here. Chapter 5 of More Guns, Less Crime has a discussion of state level data and the book explains why the simple cross-sectional comparison favored by Mother Jones is severely flawed (see previous link for more information on cross-sectional data). What Lott’s book points out is that every time that guns are banned any place in the world, murder rates have gone up. An additional discussion on state level data is available here.

It should be made clear that “Guns don’t kill people—people kill people” is a very poor argument by those who support self-defense. Guns clearly do make it easier for people to kill other people and those who deny something so obvious lose credibility, but guns also make it easier for people to defend themselves. The question is: what is the net effect? Gun ownership particularly helps the most vulnerable people in our society women and the elderly (people who are relatively weak) and those who are most likely to be victims of violent crime (poor blacks who live in high crime urban areas).

Myth #3: An armed society is a polite society.
If one really believes this “study,” the real risk of road rage is from liberals (John Lott, “Liberal Road Rage,” New Scientist, Letters to the Editor, February 25, 2006, p. 24).

Myth #4: More good guys with guns can stop rampaging bad guys.
Mother Jones makes what is at best a logical error in their evaluation of mass public shooting data. They also do not use a consistent definition for what is classified as a mass public shootings.

Myth #5: Keeping a gun at home makes you safer.
A discussion of the Kellermann research is available in Chapter 2 of More Guns, Less Crime. See here (click on text to make larger):

The Bias Against Guns has an entire chapter on this issue (see chapter 8). See also the paper that John Lott and John Whitley published in the Journal of Law and Economics in 2001 and various discussions in MGLC.

Myth #6: Carrying a gun for self-defense makes you safer.
Lott’s book More Guns, Less Crime (University of Chicago Press, 3rd ed, 2010) provides direct evidence on this. A summary of the literature survey from that book is available here. A discussion of the Philadelphia study that Mother Jones refers to is from MGLC (click on text to make larger):

A general note on the benefits of using a gun for self-defense as opposed to other methods is available here. 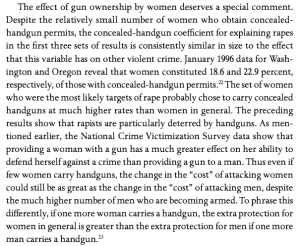 Other discussions are available here and Lawrence Southwick, “Self-defense with guns The consequences, Journal of Criminal Justice (2000): 351-370.

Myth #8: “Vicious, violent video games” deserve more blame than guns.
This is a much more difficult hypothesis to test than Mother Jones seems to believe simply because one is really limited to either just cross-sectional or time-series data and it is thus extremely difficult to disentangle other factors.

Myth #9: More and more Americans are becoming gun owners.
Mother Jones picks one survey that fits their views on the world and ignores the other evidence and the problems with the survey that they pick. Nor is there any discussion of the impact that gun control laws, such as banning certain types of guns or registration, have on the rate that people will honestly answer polls on whether they own guns.

Myth #10: We don’t need more gun laws—we just need to enforce the ones we have.
Even the liberal Washington Post is generous to give this 40% claim three of four Pinocchios. A more detailed discussion is available here.

Side note: Mother Jones claims that more federal funding is necessary for gun research. Besides noting that a lot of research has been done on guns and gun control issues since the mid-1990s despite reduced government funding, a simple point should be obvious: the government just can’t keep its political views separate from who it decides to fund. In addition, the claim that medical journal research on firearms has declined is a myth, it is actually about twice as high in 2013 as in 1996.

There are a few minor points that we haven’t written up responses to, but we will try to do that later.

← CPRC in the Philadelphia Inquirer: On why gun control is becoming even more impossible to impose CPRC on Washington DC's big WMAL to discuss recent gun control issues →