Greg Gutfeld made use of the discussion below in his appearance on Fox News’ “The Five” on Friday (transcript here).
John Lott’s op-ed at Fox News summarizing part of the post below is available here.

Four academics from Australia and the UK have really gone out of their way to put together some poorly done research (Kerry O’Brien, Walter Forrest, Dermot Lynott, and Michael Daly).  A copy of their paper is available here (PLos One, October 31, 2013).  They basically claim that gun ownership is related to racism among whites.  Here are some comments:

— Why only use this test on whites?  One would expect they would find the same relationship for blacks.
Take the Symbolic Racism Scale (the only measure that they really find significantly related to guns) — P. 9: “participants indicated the extent to which they agree (1 = agree strongly to 5 = disagree strongly) with statements such as ‘Generations of slavery and discrimination have created conditions that make it difficult for blacks to work their way out of the lower class’ (reverse scored).”
You don’t have to be racist to believe that after 150 years since slavery’s abolition, the legacy of slavery doesn’t still have a particularly big effect on how well blacks are doing these days.  There are many other ethnic groups that came to the US very poor and suffered discrimination and still have since then ended up doing very well.  Jews, Chinese are a couple of obvious examples.  In addition, blacks were doing relatively better on many dimensions, such as family stability, during the early 1960s than they are now.  See many books by Professor Thomas Sowell for example.  People might disagree with these points, but that doesn’t mean that they are racist.
[As I examine below, for some reason blacks or non-whites who hold these supposedly racist views towards blacks are also more likely to own guns.]
Conservatives have long been known to be more likely to own guns and they would be likely to be claimed to be racist based on how they are likely to answer the racism questions, but that is not the same as saying that they are racist.
— The “Black Violent Stereotype” and “Implicit racism” measures are never really significant when anything else is accounted for.  And they are not even significant on their own and thus there is not much point in discussing them.
— As an aside, research shows that it is the people who are most likely to be victims of violent crime, poor blacks who live in high crime urban areas who benefit the most from owning guns.  Are liberals then racist for their efforts to keep on imposing large fees and costs on gun ownership?  In DC it costs $534 to register and license a handgun.  It is basically only wealthy whites who go through the process.  Same in Chicago.  From NY to other places, the effect is similar.  And liberals keep voting against exempting people below the poverty level from paying these fees.  Why are liberals afraid of letting poor blacks own guns?  For an extended discussion with details on these points please see this article.

These four psychologists claim that the causation might go either way.  That racists buy guns or that buying guns makes one racist.

Similarly, simply owning a firearm may lead whites to develop more negative attitudes towards blacks. There is some experimental research showing that participants who have recently held a firearm produce enhanced salivary testosterone levels and display increased aggression toward others. Causality aside, greater control of firearms is the most logical direction for public health policy. . . . .

UPDATE: Some of the media is actually giving this study news coverage.  Take a story from the New York Daily News:

“There had already been research showing that … blacks are more likely to be shot, so we thought there must be something happening between the concept of being black and some whites wanting guns,” Monash researcher Kerry O’Brien said in an email to the Daily News. . . .

One question asked, “How well does the word ‘violent’ describe most blacks?” and participants were given five responses to choose from, ranging from “extremely well” to “not at all well.”

An “extremely well” response was seen as an endorsement of a stereotype. . . .

One would think that the news article should have mentioned that this variable is not statistically significant.

“It is particularly noteworthy that the relationship between symbolic racism and the gun-related outcomes was maintained in the presence of conservative ideologies, political affiliation, opposition to government control and being from a southern state, which are otherwise strong predictors of gun ownership and opposition to gun reform,” said the study, published in the scientific journal PLOS ONE . . . .

This paper arbitrarily uses only a subset of the factors that can account for gun ownership.  For example, here is a list of some of the variables that could have been accounted for but were not: religion and church attendance rate, marital status, party registration, home ownership, the state that the lived it (not just whether they were in the South, but even other other parts of the country or particular states), and who they supported for president.  With 3,292 whites in the sample, it would have been very easy to account for these other factors.  Since no explanation is offered for what they decided to include and what they didn’t, one wonders how many combinations of the control variables were tried before they presented the particular factors they decided to include in their estimates.  (There were a lot of minorities in the sample that could have been studied.  There were 492 blacks, 275 Hispanics, and 181 other.)

O’Brien, the lead author told the New York Daily News that “we couldn’t make sense of why there would be resistance to gun reform in the U.S.” and an Australian newspaper that “we found the arguments for opposing gun control counterintuitive and somewhat illogical.”  One obvious explanation is that police are important in protecting people but that they themselves understand they arrive on the crime scene after the crime has occurred.  As to this paper’s emphasis on suicides, it seems surprisingly unfamiliar with the research indicating that there are a lot of different ways for people to commit suicides.

From News.com.au in Australia to science publications such as Phys.org,  Science Codex, and Medical Daily these claims have been broadcast to an international audience.

UPDATE 2: I was so curious why these authors didn’t run the same regressions on non-whites, I decided to do it myself.  First, my attempt to redo their regression result for gun ownership.  My question is whether it is credible that these researchers didn’t try to run these regressions on non-whites.  I find that hard to believe, if only as a way of double checking their results.  Click on screen shots of the regression data to make them larger.  All the variables used in the O’Brien et al paper are used here with the exception of the “implicit racism” variable, which they found no evidence that it was statistically significant in any case. 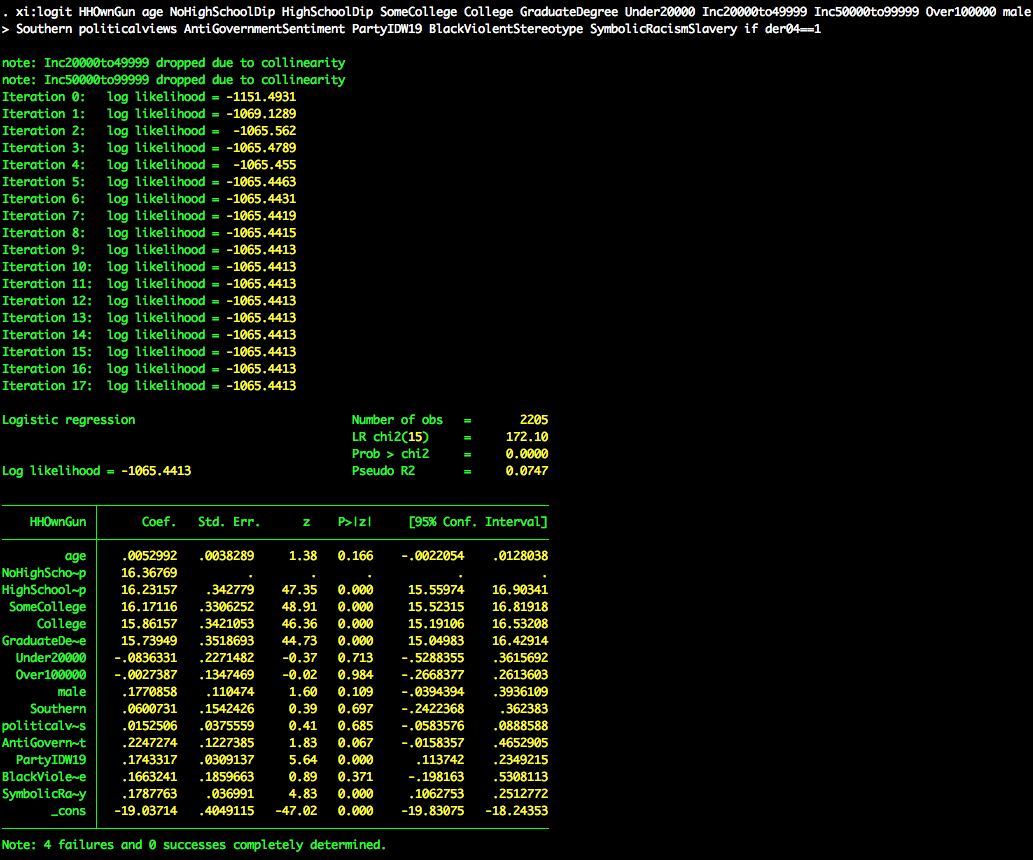 Now rerunning the same regression on non-whites.  Despite the much smaller sample, you still get statistically significant effect for this supposed measure of symbolic racism.  So are non-whites who are racist against blacks more likely to own a gun?  Hardly seems reasonable. 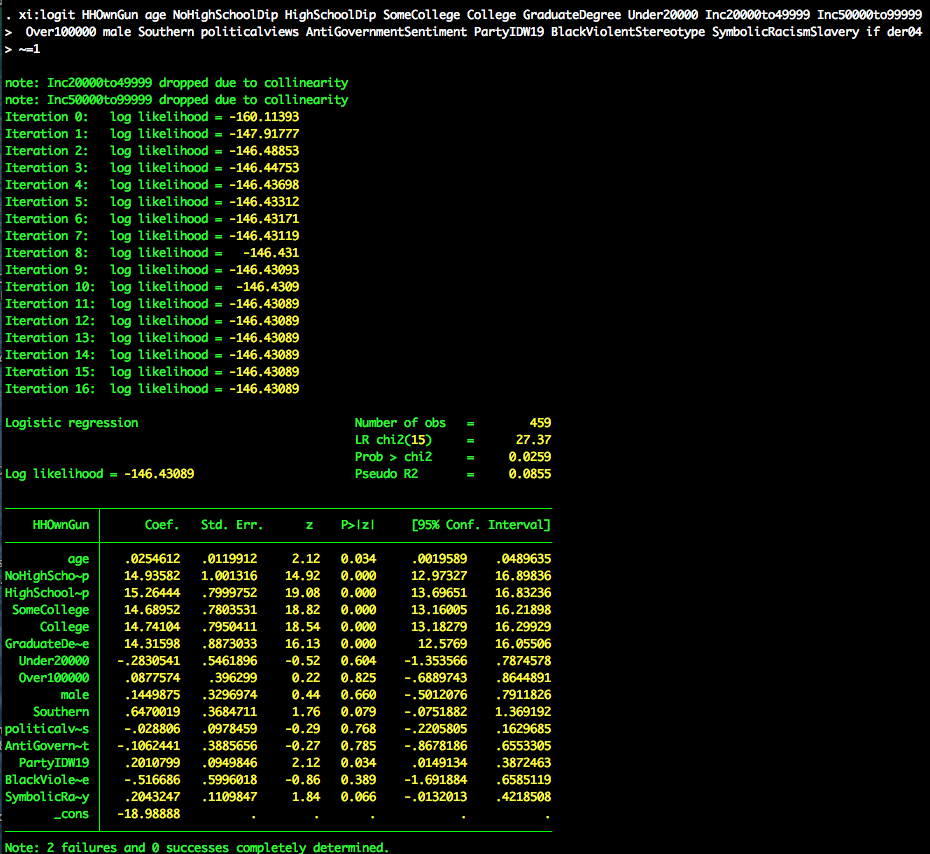 I also redid the regression for support of concealed carry. 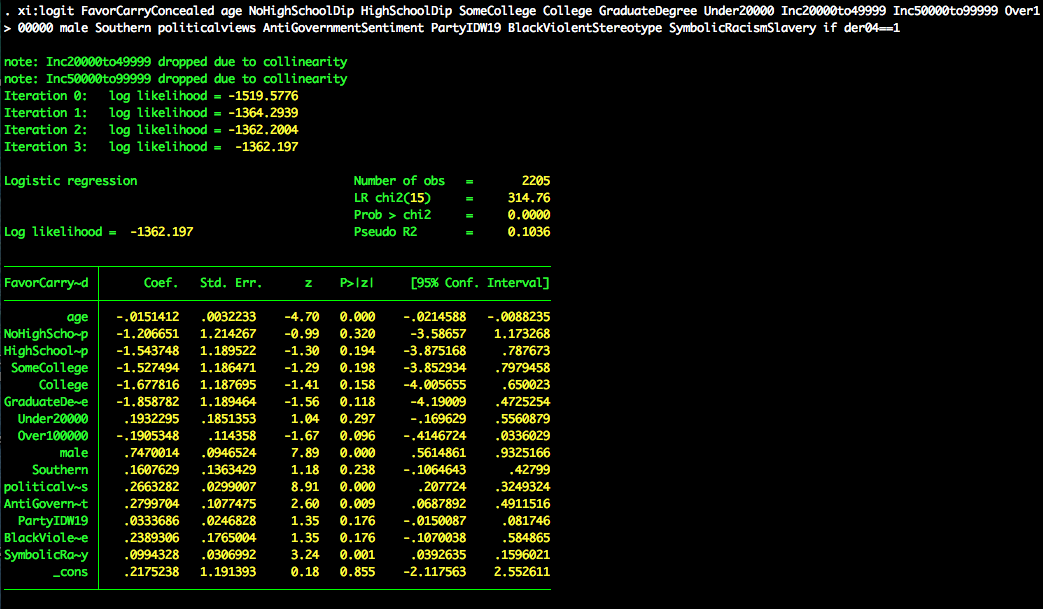 Again, running the regression on non-whites produces the same result and raises the same question about their measure of symbolic racism. 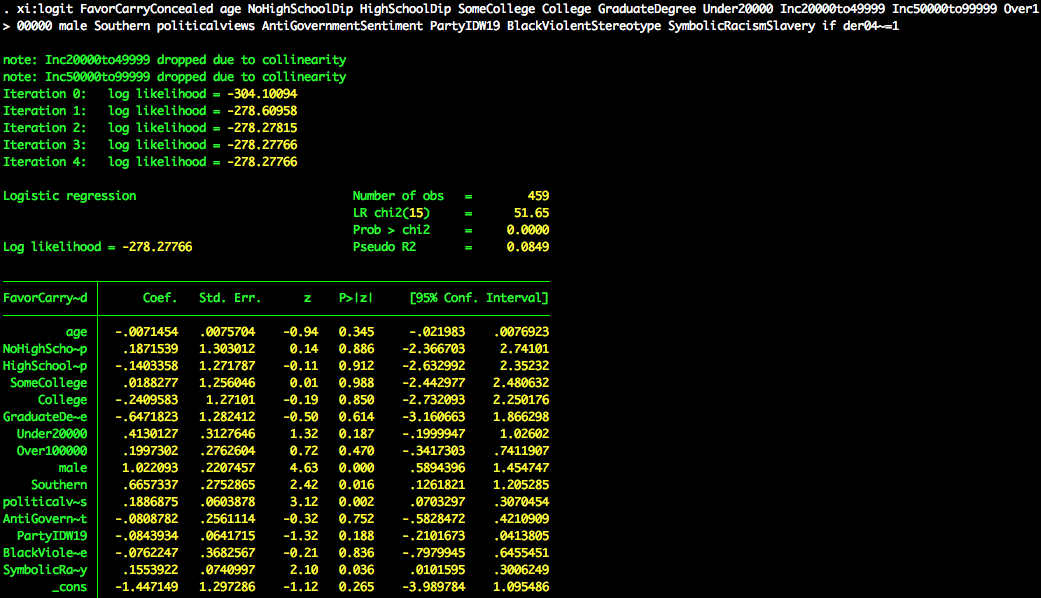 I did the regressions that used the question of whether people favored banning handguns and I got similar results (this post is getting too long, but they are available upon request).

I also reran the regressions just on blacks, though the sample was cut by about half (now just n=217, compared to n=2205 for just whites).  In both cases the coefficients for gun in the home and favoring concealed carry were again positive, though only the coefficient for favoring concealed carry was statistically significant (with a z-statistic = 2.63 and it significant at better than the 1 percent level).

These authors claimed: “we found that none of the variables reported in models for white participants were significantly related to any of the gun-related outcomes for blacks. ”  But that looks obviously false to me.  Not only is there the result just discussed, but I reran the univariate regressions reported in Tables 1, 2, and 3 for just blacks when looking at the measure of “Symbolic Racism” based on this question regarding slavery.  There are many more observations here (n=492) and all the results show a strong significant relationship between this so-called measure of racism and blacks owning guns.  Are blacks who believe that slavery isn’t still significantly related to today’s problems facing blacks racist toward blacks and thus are more likely to own guns because of that racism?  Setting the variable der04=2 means that the regression only at the answers to the survey questions given by blacks.  Setting it equal to 1 means that we are only looking at whites.

So here are the results for blacks. 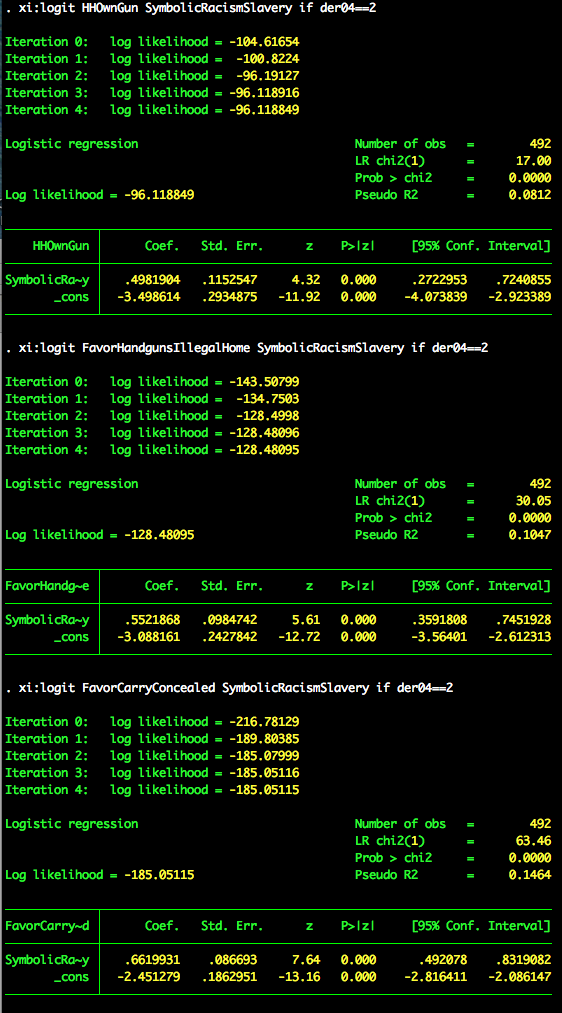 Here are the univariate results for whites. 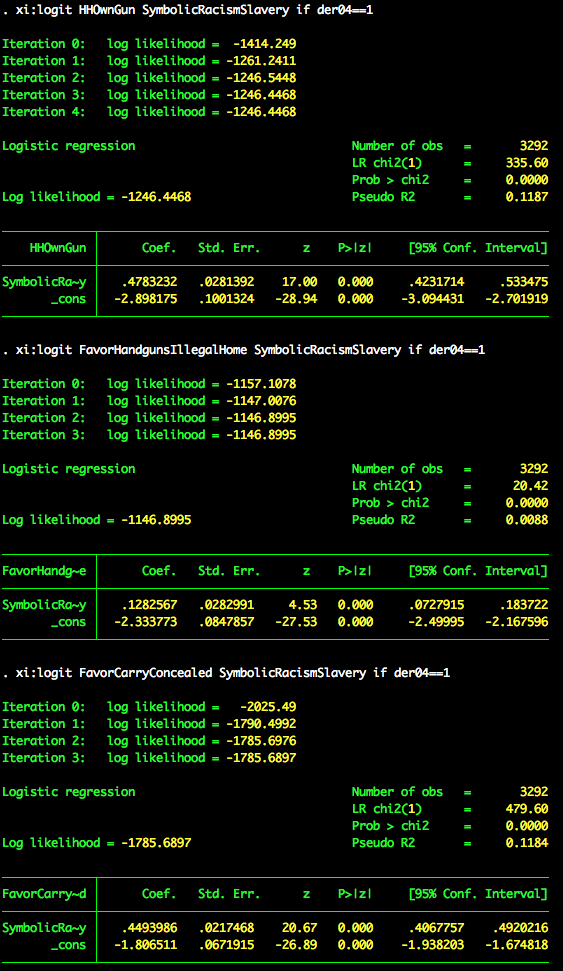 The results for nonwhites are again very similar.

Some additional media coverage of the work here can be seen at the Atlanta Journal Constitution. 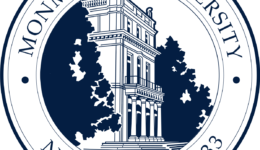