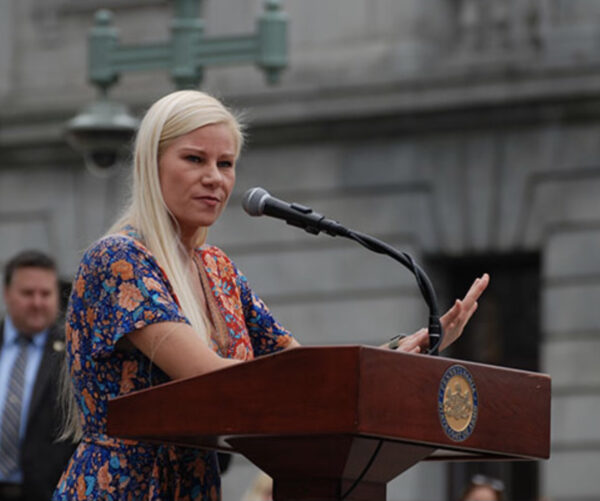 Nikki Goeser, the executive director of the Crime Prevention Research Center, was one of the rally’s main speakers. Goeser is the author of “Stalked And Defenseless: How Gun Control Helped My Stalker Murder My Husband in Front of Me.” She told the story of how her husband was murdered more than a decade ago by a man who stalked her.

She also expressed concern with so-called “gun-free zones,” saying they do more to harm law-abiding gun owners than they do to help them.

“Being a law abiding citizen, I left my legal, permanent firearm that I normally carried for self-defense locked inside of my vehicle that night. Of course, the man who was stalking me did not have a handgun carry permit, brought a gun in illegally into the middle of a gun-free zone and murdered my husband,” Goeser said, arguing that gun-free areas “leave good, law-abiding people completely helpless.”

The media coverage of the event was extremely biased, often giving more coverage to the anti-self-defense side or claiming that since people weren’t openly carrying guns, that meant that they didn’t really support gun rights. Here is an article that mentions Nikki’s talk at Penn Live, with just some of their examples of media bias.

Capitol steps in Harrisburg indicated that hardline stances on guns still run high in the views of Republican state legislators – maybe even more so than their constituents, given the turnout. . . .

Aside from the legislators, Monday’s featured speaker was Nikki Goeser, an author and activist from Tennessee who lobbies against gun-free zones and similar policies. Goeser’s husband was murdered by a stalker of Goeser’s in a gun-free zone where the couple was unable to defend themselves, she said.

“I try to educate people about the danger of gun-free zones,” Goeser said. “They leave good, law-abiding people completely helpless.”

But not every attendee subscribed to a hardline conservative philosophy on every issue. In fact, the only conspicuously-armed attendees of Monday’s rally were two pro-LGBTQ activists, with rifles and tactical gear festooned with Pride flags. . . .