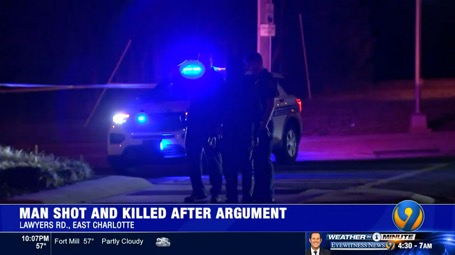 Police have classified a shooting that left a 48-year-old man dead in east Charlotte at the beginning of December as a “justified homicide.”

The shooting happened at about 5:10 p.m. along Lawyers Road at East W.T. Harris Boulevard.

Officers said the shooting stemmed from an argument that turned violent…

Detreye Kenjuan Walker died at the scene, and Foley said alcohol was involved…

The incident occurred around 6:45 a.m. this morning in the 2700 block of W 65th Street in the Chicago Lawn neighborhood on the city’s southwest side.

Authorities said that a 37-year-old male was in an alley this morning when he got involved in a verbal altercation with an unknown male offender in a vehicle.

The offender in the vehicle produced a firearm at which time the 37-year-old drew his own firearm and fired shots at the offender. The 37-year-old victim had both a valid FOID and valid Illinois Concealed Carry License and authorities indicated the man shot in defense…

The NOPD is investigating a homicide near Algiers Friday morning.

Michael Thomas, 51, is the man who was shot and killed by an Algiers businessperson Friday morning. New Orleans police said a woman let Thomas into her business in the 1300 block of Odeon Street. When he attacked her, she pulled a gun and shot him, police said. Emergency Medical Services declared him dead there….

Clara Williams Zanders is the mother of Alton Williams, a valet at the Ace Hotel. Her son was killed on the job Dec. 5 after an altercation with a hotel patron. The shooter in the case, Lavanzel Kerr, said the incident was self-defense.

Kerr has not been arrested…

Shay O’Connor, “’We do not have the truth’: Mother of Ace Hotel valet worker shot and killed, demands answers,” WDSU, January 11, 2022.

Police say a corner store owner shot a would-be robber in Philadelphia’s Feltonville neighborhood Monday afternoon. The shooting happened inside a store on the 4500 block of D Street around 1:30 p.m.

Baily set up a transaction to purchase a gun from with Trevor Scott, 19, on Middleground Road through social media, RPD says.

RPD says when Scott drove up to the site of the gun sale, Baily and Burdette surrounded Scott’s car.

Police say Burdette pulled out a gun and attempted to rob Scott.

Scott pulled out a gun and fired it. Scott then fled the scene…

In the early-morning hours of Wednesday, December 8, deputies were called to a property in the 10200 block of U.S. HWY 190 north of Livingston.

When they arrived, they found the owner and a dead man at the property. The deceased was identified as 37-year-old Joshua Read, a Houston native.

According to a release from the sheriff’s office, the property owner confronted three men who were burglarizing his business. During the fight, Read was shot and the other two fled the scene…

28-year-old Jahquille Kodarius Dubose was pronounced dead on the scene. The other robber was seen running from the scene…

So far, the Domino’s employee has not been charged with anything…

According to the Columbus Division of Police, just after 4 p.m., Thursday, a shooting was reported in the 1700 block of S. 18th Street…

Officers were then alerted to a reported shooting in the 100 block of Southgate Drive that was related.

Police talked to people involved and determined the teen had been trying to rob another person at gunpoint when a shootout ensued, leaving him injured. He then drove to the location on S. 18th Street where he called for help…

The Jackson County District Attorney’s Office announced that it will not file charges against 36-year-old DeAngelo McCauley who shot and killed 31-year-old Dominique Brown because evidence points to McCauley acting in self-defense.

The incident took place around 6:50 am on December 11 at a Duplex in the 800 block of Belmont Street. Officers from the Medford Police Department were dispatched on reports of multiple gunshots and a male at the location who had been shot…

The person who fatally shot the man was on scene and cooperated with law enforcement. The investigation revealed that a 31-year-old man was outside causing a disturbance after an apparent night of drinking. He did not live in the area, but was visiting an associate who lives nearby, whom he was upset with.

The incident happened back on Dec. 12 in the parking lot area of a Target at 1750 West 37th Street.

Hialeah Police officials said the victim had listed some firearms for sale on a website and was contacted by Arnoux who said he was interested and wanted to meet to make the purchase.

During the sale, the teens gave the victim counterfeit money but when the victim told them it was fake, Araujo pulled out a gun and held the victim at gunpoint as Arnoux robbed the victim of his guns, police said.

The victim was in fear for his safety and pulled out another gun from his waistband and opened fire, hitting both teens, police said…

Police said the suspects entered the store and took cash at gunpoint.

The incident happened Tuesday afternoon just before 4 p.m. near Indy Pawn along N. Franklin Rd. on the rear side of the building.

Lawrence police said an employee was walking outside the store when he was approached by three individuals, at least one of whom was allegedly armed with a gun.

“The three individuals attempted to rob the pawn shop employee. There was an exchange of gunfire that resulted from that. One of the individuals who was committing the robbery was struck by some of that gunfire,” said Gary Woodruff, deputy chief of the Lawrence Police Department…

An initial incident occurred on Wednesday afternoon near the intersection of Crossing Place and Prince William Parkway. Officers learned of a shooting and armed carjacking that occurred in the area.

The victim in the carjacking, a 25-year-old man, told police that he had arranged to meet an unknown person in the area to conduct a transaction. Police claimed that during the encounter, the other person, who was later identified as Tucker, pulled out a gun. The victim was also armed.

The victim fired at the suspect, police said. The suspect then entered the victim’s car and fled the area. The victim initially fled the area on foot, but he was stopped by police after witnesses reported the shooting.

Authorities have not announced any charges for the victim. No injuries or property damage was reported in the initial shooting. The victim’s vehicle was recovered later on Wednesday evening…

Memphis Police responded to a shooting at the BP gas station in the 800 block of Crump around 1:33 p.m. Thursday afternoon.

Police said a man stabbed one person and attempted to stab at least one other person after a vehicle crash around I-30. Seemingly acting in self-defense, investigators say one of the victims shot and killed that man…

The first incident occurred at about 6 p.m., in which officers responded to a robbery with possible shots fired, Sgt. Sean Blandford said, in the area of West Lodi Avenue and South Orange Street…

“Witnesses said they saw a guy run inside the (Lodi Avenue Liquors) to rob the place, and when the employee refused to give him any money, he was hit in the head with a blunt instrument,” Blandford said. “The employee then armed himself with a firearm and fired, and he struck the suspect.”

The would-be robber then fled the store, but officers were able to detain him in a nearby parking lot…

Lightford, the Senate majority leader and the second highest-ranking senator in the General Assembly, was in a vehicle with her husband, Eric McKennie, when they were carjacked at about 9:45 p.m. Tuesday. The couple was in the near west suburb to drop off a friend, police have said.

At some point after Lightford and McKennie were ordered out of their black Mercedes SUV, there was an exchange of gunfire between McKennie and at least one of the carjackers, Broadview police Chief Thomas Mills said Thursday.

No one was hurt during the incident, which occurred in the 2000 block of South 20th Avenue…

Officers were called to the store at 5:07 p.m. Thursday.

Police said someone who was working at the store fired multiple shots at McLaurin, who then left the store…

Just before 4 p.m. Dec. 28, police were called to the park for a shooting and found Ian D. Thomas, 16, dead from a gunshot wound.

Police said Thomas was with a group of people who attempted to rob and shot a 32-year-old man. The man’s gunshot wounds were not life-threatening.

The man defended himself by firing his legally owned and permitted concealed gun, striking Thomas. The others in the group fled before police arrived…

A Minneapolis man was charged Tuesday with aiding two teenage boys in a December robbery that resulted in both of the teens being shot, one fatally…

According to the criminal complaint: Police were called to the area of 2400 Dupont Avenue N. about 4:30 p.m. for shots fired. They found Jackson lying in the alley, where he was pronounced dead…

The male told police that he had arrived at the scene of the shooting to sell a pair of sneakers to someone he met on Snapchat. He said the two teens approached with handguns pointed at him, went through his pockets and took his wallet and cellphone…

The two teens then ripped a gold necklace from the male’s neck, at which point the male drew a handgun from his waistband and shot them…